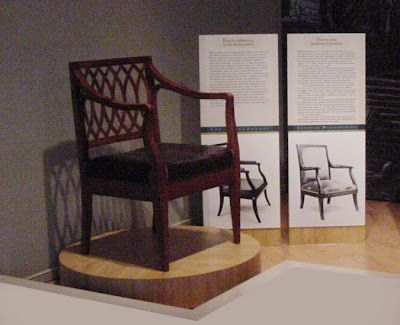 Slavery and Southern Furniture
Thomas Jefferson's use of slave artisans at Monticello was by no means unusual. Southern planters commonly sought skilled joiners, blacksmiths, weavers, and other tradespeople. Southern cabinetmakers, too, used enslaved African-Americans in their shops. So pervasive was the use of slave artisans that German visitor Johann David Schoepf noted in 1783, “There is hardly any trade or craft which has not been learned and is not carried on by negroes.”
In short, African-Americans played a vital role in the production of much southern furniture, yet their contributions remain unappreciated and unrecognized. To a large extent, this omission reflects the anonymity of these men, whose very existence rarely is noted in historical records. In an advertisement, Williamsburg cabinetmaker Peter Scott offered to sell land, furniture, tools, and “Two Negroes, bred to the Business of a Cabinetmaker.” Even the names of these individuals are not recorded.
The considerable presence of black artisans is also indicated by the many runaway slave advertisements that appeared in southern newspapers. Often these notices reflect the great value owners placed on skilled slaves. In 1784, William Fitzhugh of Virginia described slave James as “square and strong made, sensible and well spoken,” and “as good a joiner as any in Virginia.”
With the introduction of less stringent manumission laws after the Revolution, came a sizable increase in the number of free black artisans. By 1816, for example, free blacks John Raymond and John Ventus ran a large cabinet shop in Petersburg, Virginia. They employed several white artisans and proudly announced their ability to execute work in the “best and most fashionable” style. But firms like Raymond & Ventus were the exceptions.
Until we know more about the talented African-Americans who made of helped make many of the objects in this exhibit, out understanding of the southern cabinet trade will remain incomplete. (source: Chipstone.org)
Posted by Ron at 10:56 AM