Sweetgrass Baskets in the Time of Slavery 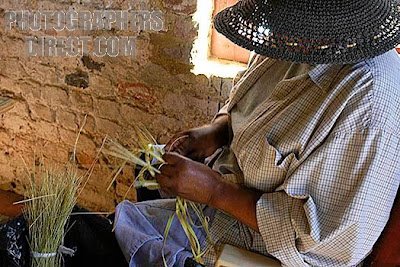 The basket-making tradition came to South Carolina in the 17th century by way of West African slaves who were brought to America to work on plantations. West Africa resembles South Carolina in both climate and landscape, and rice had long been cultivated there. In slaves, plantation owners gained not only free labor but also a wealth of knowledge and skill.
One of these skills was basketry. Using marsh grass, or bulrush,* slaves coiled sturdy, intricate work baskets called fanners. Fanners were used for winnowing, the process of tossing hulls into the air to separate the chaff from the rice. Other work baskets held vegetables, shellfish, and later, cotton. 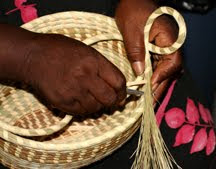 Interestingly, though sweetgrass baskets are now made mostly by women, male slaves usually made these large baskets for the field. Women focused on the functional baskets of the home, which they used in their cabins for storage and food. Baskets were often coiled by older slaves who were no longer able to work in the hot sun; plantation owners then sold them for extra income. 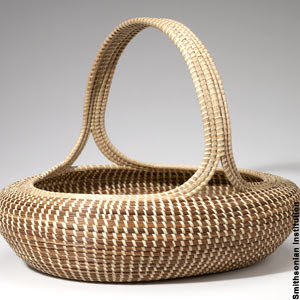 Later, after Emancipation, the Penn Center on St Helena Island near Beaufort began to teach industrial skills to newly freed blacks. Even then, basketmaking was taught to the men – not the women. 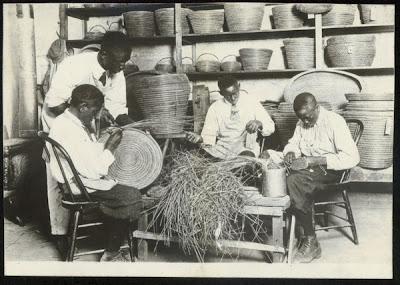 Sweetgrass baskets are almost identical in style to the shukublay baskets of Sierra Leone, and learning to coil baskets "so tightly they could hold water" was an important rite of passage in West African tribes like the Mende and the Temne.*
Sweetgrass Baskets after the Plantation Era
The Civil War brought an end to the rice era in South Carolina. Without slaves, planters were no longer able to maintain their fields. Freed slaves set about establishing new lives at a time when the economy was in shambles. Without the means to go elsewhere, many former slaves remained on their old plantations, returning a portion of the food and crops they raised back to their former owners in exchange for the use of the land. It was a sustenance existence and cash money was scarce. 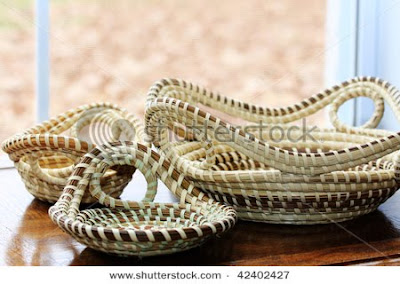 Requiring only readily available, free materials, making grass baskets cost nothing but time. Newly freed slaves found many uses for the baskets. They made sewing baskets, hot plates, storage containers, and crop baskets. Ironically, it was this skill passed down from their African ancestors that helped them meet so many practical needs during their early years of freedom. 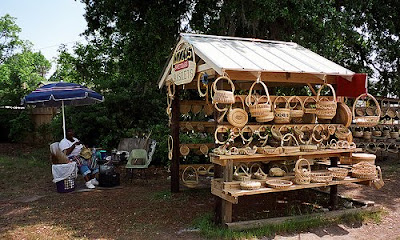 Grass baskets were, and still are, made by African-Americans throughout the entire coastal south, but they have become most identified with the South Carolina lowcountry.
In the early 1900s, many descendants of freed slaves still rented cabins and worked on the grounds of Boone Hall Plantation, on Highway 17, just north of Mount Pleasant. As automobiles became more common, tourists from the North began stopping at Boone Hall and some bought grass baskets as souvenirs. In the 1920's, one enterprising family sold some of their baskets to a Charleston man who in turn, shipped them to New York to sell in specialty stores. The basket makers themselves did not make a great deal of money, but it was the beginning of the realization that handmade baskets had commercial value. 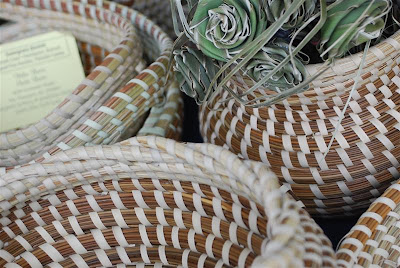 During the lean times of the Great Depression, basket makers in the general area of Mount Pleasant joined together to fill "bulk orders" for the New York shops. They started to weave sweetgrass and pineneedles in with the bulrush, which proved to be very popular commercially. The tender sweetgrass was more pliable and enabled them to create more intricate designs, particularly in handles. It also had a pretty, light color and a fresh, hay-like scent.
It was during this time the first roadside basket stand appeared. Mrs. Ida Jefferson Wilson got into an argument with the overseer of farm operations at Boone Hall Plantation and as a result, lost her "day-labor job". Highway 17 had just been paved. Mrs. Wilson knew there was a northern market for grass baskets, so she decided to display some of hers on a white sheet spread over a chair beside the southbound lane of the road. She sold one fruit basket. 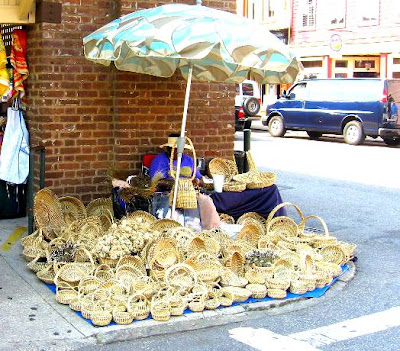 By the end of the week, Mr. Wilson had built a wooden stand for his wife where she could hang baskets for display and have a place to sit and make more baskets while awaiting customers. When others in the community heard she had earned money in this way, more stands appeared, eventually becoming a trademark of that section of Highway 17. (source: South Carolina Information Highway)
Posted by Ron at 4:59 AM