An African Republic: Black and White Virginians in the Making of Liberia 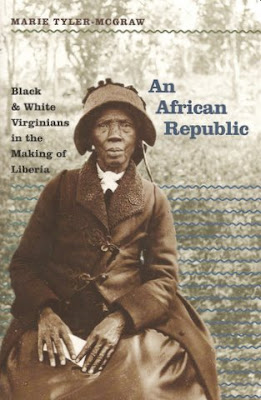 Marie Tyler-McGraw: An African Republic: Black and White Virginians in the Making of Liberia

On October 28, 2010, Marie Tyler-McGraw discussed her book An African Republic: Black and White Virginians in the Making of Liberia. The West African nation Liberia arose from the aspirations of the American Colonization Society, which attempted to persuade free blacks to emigrate from the United States to that colony. Ultimately, the colonization scheme failed, but Liberia endured. No state was more involved with the project than Virginia. Virginians figured prominently among both leaders of the American Colonization Society and among settlers building a new life in Africa. Though their paths rarely intersected, these black and white Virginians played key roles in founding Liberia. In this presentation based on her latest book, Marie Tyler-McGraw told this compelling story of hope and misunderstanding, race and freedom. Also the author of a history of Richmond, Dr. Tyler-McGraw is an independent scholar and public historian. The lecture was co-sponsored by The Richmond Forum in conjunction with its November 6, 2010 program, featuring President Ellen Johnson Sirleaf of Liberia. (source: Virginia Historical Society)