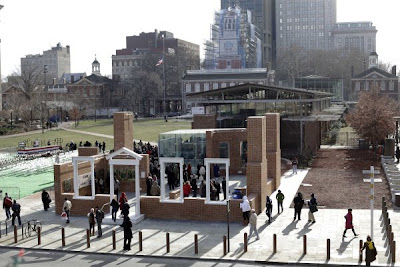 The new President's House exhibit, on the site of the Philadelphia home of George Washington and John Adams

PHILADELPHIA — Archaeologists unearthing the remains of George Washington's presidential home have discovered a hidden passageway used by his nine slaves, raising questions about whether the ruins should be incorporated into a new exhibit at the site. (source: MSNBC)

The underground passageway is just steps from the Liberty Bell and Independence Hall. It was designed so Washington's guests would not see slaves as they slipped in and out of the main house.

"As you enter the heaven of liberty, you literally have to cross the hell of slavery," said Michael Coard, a Philadelphia attorney who leads a group that worked to have slavery recognized at the site. "That's the contrast, that's the contradiction, that's the hypocrisy. But that's also the truth."

Washington lived and conducted presidential business at the house in the 1790s, when Philadelphia was the nation's capital. 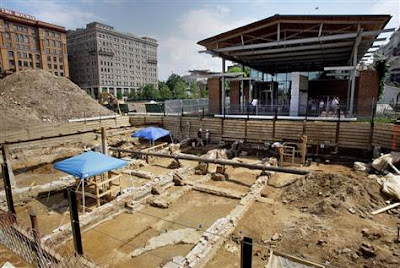 The remains of Colonial-era buildings, including the house that George Washington lived in when he was president, are exposed at an archaeological dig in front of the Liberty Bell Center, top right, in Philadelphia. Archaeologists have discovered a hidden passageway that was used by Washington's nine slaves

The findings have created a quandary for National Park Service and city officials planning an exhibit at the house. They are now trying to decide whether to incorporate the remains into the exhibit or go forward with plans to fill in the ruins and build an abstract display about life in the house.

Making that decision will push back the building of the exhibit, which had been slated to open in 2009. But the oversight committee won't rush into construction, said Joyce Wilkerson, the mayor's chief of staff.

"We never thought we'd be faced with this kind of decision," she said."We would've been happy to have found a pipe! And so we don't want to proceed blindly or say, 'This isn't in the plan.'"

Rep. Bob Brady, D-Pa., was so moved when he visited the site last week that he declared: "We need to rethink what we're doing here."

"It's astounding, absolutely astounding," Brady said. "I'm going to fight to keep it open, I'll tell you that much." 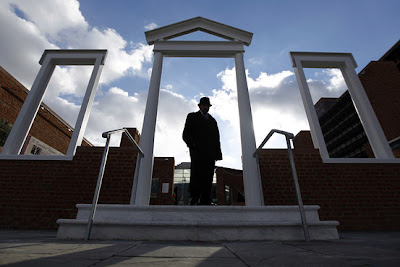 Aside from the passageway, archaeologists have uncovered remnants of a bow window, an architectural precursor to the White House's Oval Office, and a large basement that was never noted in historic records.

"We actually found a lot more of the remains of the President's House than anyone expected. Myself included," said Jed Levin, an archaeologist with the National Park Service.

Thousands of visitors have been drawn to the ruins, standing on a small wooden platform to gaze down at the house's brick and stone foundation. The public response spurred officials to continue the excavation until at least July 4; it began in March and had been scheduled to end last month.

Archaeologists have served as guides, answering visitors' questions. Cheryl LaRoche, a cultural heritage specialist, said she enjoys educating people about how even a prominent statesman like Washington could own slaves.

"We've been striving to present a balanced view of history that stands apart from what's been taught in history books," LaRoche said.

Most of Washington’s slaves lived at his Mount Vernon estate in Virginia. When Washington died in 1799, he had more than 300 slaves. In his will, he arranged for them to be freed after the death of his wife. 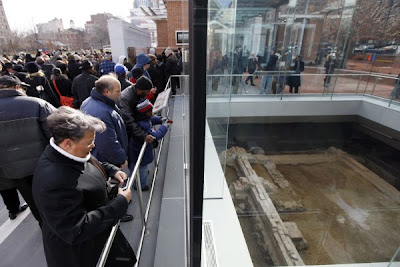 The foundation of the home, where President George Washington kept slaves

Before the ruins were unearthed, officials had planned an exhibit without archaeological findings. The planned design included a framework of the house, LED screens and other audiovisual elements explaining its history, including stories of Washington's slaves.

The remains would crumble if left unprotected. If the design included elevators, ramps or stairs to move visitors down into the newly dug ruins, costs would increase significantly.

Coard said he is confident the oversight committee will find the best way to tell the slaves' stories.

"Everybody's on board in terms of seriously considering incorporating the architectural dig into the design," Coard said. "The question now is: Is it doable? Nobody is saying, 'No, it shouldn't be done.'"

David Orr, an anthropology professor at Temple University, has visited the site at least four times. He posted a note on the President's House Web site urging officials to keep the ruins on display.

"It's just fantastic," Orr said. "I can't tell you enough how exciting it is. For years and years and years I've been trying to promote that kind of public archaeology." (source: MSNBC)