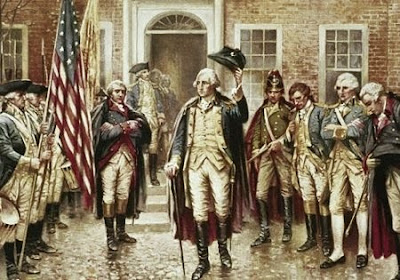 From the History News Network, published on December 2, 2002, in an article entitled, "George Washington's Philadelphia Slave Quarters" by Edward Lawler, Jr.:
In the movie The Sixth Sense, the boy who sees dead people is sitting in his classroom and his teacher asks, "What was the capital of the United States from 1790 to 1800?" No one in the class knows the answer, and probably not one in a hundred Americans watching the movie knew that it was Philadelphia. Until earlier this year, had the question been, "Where was the Philadelphia 'White House' and what did it look like?" perhaps one in a million could have gotten it right.
Why is this? Why should the building which served as the Executive Mansion of the United States for ten years while the national capital was under construction, the house in which Washington and Adams lived for the lion's shares of their presidencies, the seat of the executive branch of the Federal government from 1790 to 1800 be so obscure? 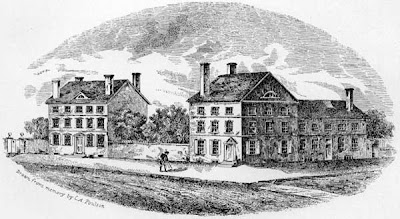 "Residence of Geo. Washington and R. Morris, south-east corner of Sixth and Market Streets, Philadelphia." The notation at the bottom left reads, "Drawn from memory by C.A. Poulson." Wood engraving by Charles A. Poulson and an unknown engraver. From William Brotherhead, ed., Sanderson's Biography of the Signers (Philadelphia: 1865),
The President's House stood on the south side of Market Street, about 500 feet north of Independence Hall. The site is now part of Independence Mall, and the Liberty Bell Pavilion sits just to the east of it in what had been the president's garden. A public bathroom has occupied the house site for the past 48 years. 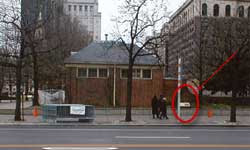 Public Restroom on site of George Washington's Philadelphia Residence
A new building to house the bell is under construction less than 100 feet from the old one, and this Liberty Bell Center will partially cover the site of the backbuildings of the President's House property. Under the new cener's porch will be the smokehouse and its addition.
Washington moved into the President's House in late November 1790, with a household staff of about 24 -- 16 or so white servants, and 8 black slaves. He had spent most of the autumn at Mount Vernon, leaving his secretary to prepare the Philadelphia house. The semi-weekly correspondence between the two contains a treasure trove of detail about the mansion, including Washington's instructions about where the servants should be housed. He initially discussed converting part of the hayloft into lodging rooms, then considered walling off a section of the servants' hall, but finally decided to use the smokehouse. The secretary acknowledged the president's order in an October 31, 1790 letter: "The Smoke-House will be extended to the end of the Stable, and two good rooms made in it for the accommodation of the Stable people." Subsequent letters between them confirm the order. 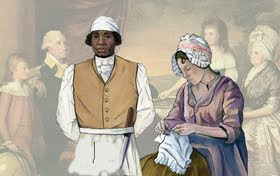 The "Stable people" consisted of the white coachman, A. Dunn, two black slaves, Giles and Paris, and a likely third, Austin. The smokehouse was small, about 8 1/2 feet square on the interior, and the addition slightly larger, about 8 1/2 by 11 1/2 feet. (The dimensions are recorded on a 1785 map of the property.) According to French exile Moreau de Saint-Mery, segregation in 1790s Philadelphia was so great that white servants would not eat at the same table with free blacks, let alone slaves. Washington instructed that the household's other black men be housed in a room to themselves in the attic of the main house. Rather than mix the races in the smokehouse, it seems likely that the president would have given Dunn the small room to himself, and Giles, Paris and Austin, the larger one.
Independence National Historical Park (INHP) vehemently objects to the addition to the smokehouse being called a slave quarters. In April, an INHP historian questioned whether the addition was even built, although, a month later, the park’s preliminary report on the history and interpretation of the house acknowledged that it was. Another INHP official stated that where the slaves lived cannot be established with any certainty, and that all types of servants –- wage-earners, indentured servants, slaves – lived by the stables. This statement is true only over time. Dunn was a wage-earner; Washington later replaced the stable slaves with white German indentured servants, although the earliest record of this was not until 1792. The INHP final report deftly avoids the controversy by calling the smokehouse and its addition "housing quarters." 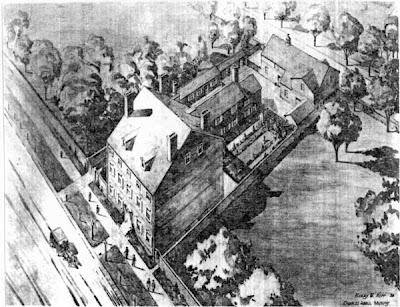 . "Robert Morris House (known as Washington Mansion) 190 High Street." Photostat of drawing by Harry W. Neff and Charles Abell Murphy (based on the designs of David H. Morgan). Dated "[19]38." Free Library of Philadelphia.
The use of this euphemism may have contributed to the recent comments in the Philadelphia Inquirer by an INHP spokesman: “primary documents call [the rear of the President’s House] the servants’ hall”; “[there are no historical records] that said it was a slave quarters”; “and we are standing with the fact that no one knows if slaves slept there or if slaves didn’t sleep there.” The story was picked up by the Associated Press, and published in the New York Times and elsewhere.
Actually, the servants’ hall (to the east of the kitchen ell) and the addition to the smokehouse (to the south of the ell) were different spaces. The servants’ hall was also called the “refectory,” or dining hall. In his letters, Washington accounted for housing all the servants elsewhere, so it seems likely that none of them, black or white, slept in the servants’ hall.

Why is INHP bending over backwards to avoid dealing with slavery in the President’s House? The park took over operation of the Mall in 1974, the same year that an INHP report confirmed that the blacks in Washington’s presidential household were slaves rather than free. The presence of the slaves is not mentioned on the interpretive panel outside the public bathroom, although the park has had sole responsibility for interpreting the site for the past 28 years. INHP statements (including one on its Web site) imply that everyone has known all along that Washington had slaves in Philadelphia, assertions which just make people angry. Five hundred protesters who had only recently learned of the presence of the slaves demonstrated at the site on July 3rd. INHP’s confused claim that there was no slave quarters will only increase public hostility and mistrust.
Fortunately, things seem to be changing. The Philadelphia City Council and the Pennsylvania Legislature passed unanimous resolutions urging INHP to commemorate the President’s House and its slaves, and the U.S. House of Representatives attached an amendment to the 2003 budget of the Department of the Interior requiring it to do so. Progress on the commemoration was made at an October 31 meeting of National Park Service and INHP officials, community leaders, historians, and designers. Additional meetings are scheduled, and a public meeting is promised.

As in The Sixth Sense, the President’s House site has its ghosts. Future visitors to the Liberty Bell will walk across its entire footprint, including the quarters of the stable slaves, as they approach the new Liberty Bell Center building. After 200 years of obscurity, it now appears that the house and the lives of its less-illustrious inhabitants will be remembered.
***
Mr. Lawler is leading a petition drive to persuade the Park Service to draw attention to George Washington's President's House and slave quarters in Philadelphia. His work has been published in the Pennsylvania Magazine of History and Biography. [Obviously he won. Yeah! For historical accuracy and truth. America is finally growing up and leaving fuzzy propaganda history in the dustbin of life.]
Posted by Ron at 10:45 AM