Iron Chains and Collars on Slaves 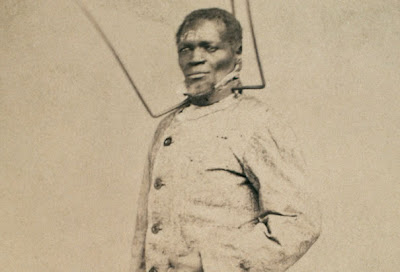 In 1819, the Legislature of Louisiana recognized the lawfulness of putting iron chains and collars upon slaves, to prevent them from running away, as follows:

“If any person or persons, &c., shall cut or break any iron collar which any master of slaves shall have used in order to prevent the running away or escape of any such slave or slaves, such persons so offending shall, on conviction, be fined not less than two hundred dollars, nor exceeding one thousand dollars; and suffer imprisonment for a term not exceeding two years, nor less than six months.” (Act of Assembly of March 6, 1819. Pamphlet, p. 64.)

Compare this penalty with that imposed by the Legislature of the same State for cruelties committed on slaves, viz: “not more than five hundred dollars nor less than two hundred,” (1 Martin’s Digest, 654,) and it will appear that the releasing of a slave from the “usual” punishment of the “iron chain or collar” is regarded a more aggravated crime than inflicting upon him the “unusual punishment,” whatever it may be, prohibited by law! For thle act of mercy, the offender may be fined $1000 and imprisoned two years; for the act of atrocious cruelty, he may be fined $500, but without imprisonment. Thus it is that the Legislature of Louisiana discountenances cruelty.
Posted by Ron at 8:58 AM