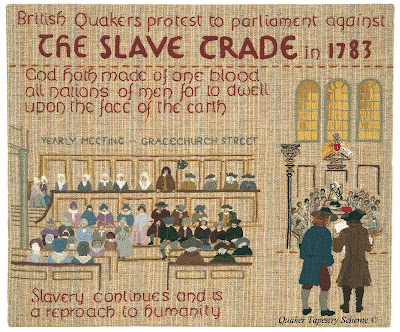 The Quakers were the first religious denomination on either side of the Atlantic to come out against slavery. There were only some 20,000 Quakers in Britain in the late 18th century, but they supplied nine of the 12 members of the influential abolition committee that began meeting in 1787.
That first meeting took place in a London Quaker bookstore and printing shop. An all-Quaker abolition committee had actually been started four years earlier, but because of widespread prejudice in Britain against religious dissenters, the committee's efforts failed to gain public attention until it joined forces with similarly-minded Anglicans.

For decades to come, Quaker merchants and businessmen provided most of the movement's financial support. The network of Quakers around the country were the core of the local anti-slavery committees organised by Thomas Clarkson. Clarkson himself once said he felt 'nine parts in ten' a Quaker, but politically it was more sensible for him to remain an Anglican. Clarkson and others were much influenced by the writings of the early Quaker abolitionist Anthony Benezet, who, like many Quakers, spent time in both Britain and America.

Other Quaker stalwarts of the anti-slavery movement included Elizabeth Heyrick, businessman-philanthropist Joseph Sturge - who travelled to investigate conditions in the West Indies - and his sister Sophia, who personally called on 3,000 households to ask them not to eat slave-grown sugar. The Quaker John Woolman campaigned against slavery on both sides of the Atlantic, and his 1754 anti-slavery tract was one of the very first to profess opposition to slavery. (source: BBC)

Email ThisBlogThis!Share to TwitterShare to FacebookShare to Pinterest
Labels: quakers