The B.E.T. Mini-series: The Book of Negroes

From The Globe and Mail [Canada], "How The Book of Negroes, a profound yet unknown Canadian story, became a miniseries," by Jane Taber, Louisbourg, Nova Scotia, Canada, on 2 January 2015  -- On a bitterly raw day last April, with the cold north wind whipping up the seas along the Atlantic coast of Cape Breton, Lawrence Hill watched his story, The Book of Negroes, come to life.

This was no Hollywood soundstage – Hill was bundled up against the almost hurricane-like winds blowing through the Fortress of Louisbourg, a national historic site and tourist destination in the summer, which on this day was dressed up to look like lower Manhattan in the late 18th century, when the victorious rebel Americans vanquished the occupying British.

“It was kind of surreal and unbelievable,” Hill said in a recent interview about seeing his award-winning 2007 novel transformed into a six-part miniseries.

The Book of Negroes chronicles the dramatic journey and life of Aminata Diallo, a young West African girl, abducted from her village and sold into slavery in America. Eventually, she registers her name in the Book of Negroes, the British ledger of 3,000 Black Loyalists who declared their allegiance to the King and were allowed to leave America for Nova Scotia – and what they believed was the promised land. She lives her final years in England.

The $10-million miniseries premieres on CBC Television on Jan. 7 at 9 p.m. (9:30 in Newfoundland) and continues on consecutive Wednesdays; in February, it will air in the United States on BET (Black Entertainment Television). Louis Gossett Jr., who won an Oscar for his part in the 1982 film An Officer and a Gentleman, was also in Nova Scotia in the spring, shooting scenes as Daddy Moses, a partially blind, elderly preacher who is a father figure to Aminata.

“It’s a natural, it’s a no-brainer,” Gossett said in an interview about taking on the role. “It’s just perfect, it’s historically right …”

Gossett has done a number of projects in Canada and considers it “my second home.”

He was a co-star in the groundbreaking 1977 television miniseries Roots, and narrated the 2013 audiobook of 12 Years a Slave; he says this project continues the story of “atrocities and slavery.” He doesn’t want the storytelling to stop: “There are some great stories now to tell both through Canada and North America about the African contribution,” he says.

The Book of Negroes is an ambitious production – filmed in two countries, South Africa and Canada, on two continents, with an international cast of 120 and more than 400 crew members – but Hill, 57, who co-wrote the screenplay, says it is “very profoundly a Canadian story, but a very unknown Canadian story.”

That his book has even come to life on TV is a feat – almost as much creative energy went into financing it as writing it. It’s been a four-year process.

“It is a beast,” says Damon D’Oliveira, the producer. “We have 18 different partners that are helping finance this.” A typical Canadian production would have six to eight separate sources, he says.

This is the biggest production and first miniseries that D’Oliveira – who with Clement Virgo runs Canadian production company Conquering Lion Pictures – has done. Virgo co-wrote and directed the miniseries.

At first, the two men wanted to make the book into a feature-length film – but felt, given its scope, that a miniseries made more sense creatively and financially.

“We realized the story was bursting out of the seams and needed a longer format,” says the Jamaican-born Virgo, who was initially put off by the book’s title.

“It felt like it would have been medicine. Good for me – a kind of story that you’re supposed to watch or read,” he says. “That was my first real prejudice against it.”

But that changed after a chance encounter with Molly Johnson, the Canadian jazz singer and songwriter, at a bookstore in Toronto’s Kensington Market. She insisted he read it – and pulled his wallet out of his pocket for him to buy it.

Finding Aminata, however, was one of the most crucial elements to telling their story. She is a strong female lead and heroine – and they needed an actress who could age credibly over 30 years. (As a girl, Aminata is played by Canadian actress Shailyn Pierre-Dixon.) They found Aunjanue Ellis, a U.S. actress best known for her role as a maid in the movie The Help.

“She just blew us away,” recalls D’Oliveira of her audition. “She embodies the spirit of Aminata.”

For Hill it was also important that the Aminata character look right: “There is a trend to feature light-skinned black women in black roles,” he said. “I didn’t feel it was appropriate for a movie depicting an 18th-century woman from Mali. …

“Aunjanue is great and I’m glad that she looks right for the role, too,” he says. “Black women … would have had reason to be really offended if this role were cast … as a person who really looked white.”

Hill grew up as a multiracial kid – the middle child of a white mother and black father, both human-rights activists – in the unlikely but picture-perfect and predominantly white Toronto suburb of Don Mills in the sixties and seventies.

“It was a stifling place racially, and it wasn’t a place I felt comfortable in,” he said. Still, he gives Don Mills top billing for making him an author: “Coming to terms with growing up mixed-race in Canada … that ambiguity probably was the crucible for a writer. … I feel thankful that I grew up in a background that was sometimes confusing.”

It’s been eight years since Hill wrote The Book of Negroes – and 30 years since he discovered historian James Walker’s book The Black Loyalists on his parents’ bookshelf. 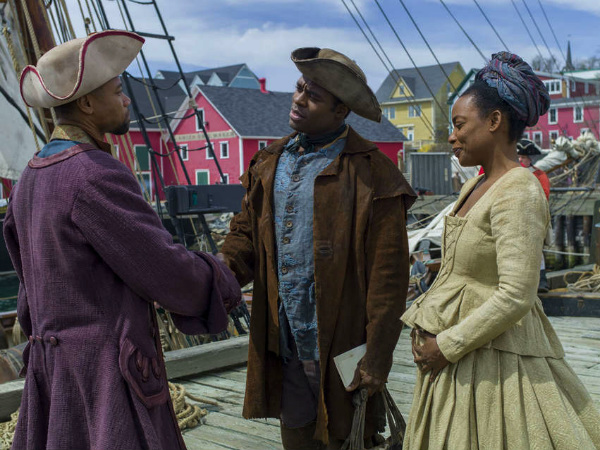 “I was blown away,” he recalled. The Walker book is a scholarly tome, which dealt with the exodus back to Africa and also mentioned the Book of Negroes. “It sat with me for 15 years before I actually turned to it actively.”

Instead he wrote six other books before finding the confidence to write The Book of Negroes.

Writing a screenplay is a new genre for Hill. It is collaborative as opposed to being a solo act, he notes. He says the story has been changed to adapt to television – but it still honours his book.

And it is a Canadian story, he reiterates. “It’s a Canadian story that has not been dramatized before … the story of the Black Loyalists. That’s the problem with Canada – we have a very limited notion of what constitutes Canadian history.”  (source: The Globe and Mail)