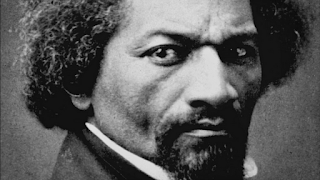 As reported by The UK Guardian, "The Economist's review of my book reveals how white people still refuse to believe black people about being black: This is what happens when racism goes viral. This is why, somehow, it still can," by Edward E Baptist, on 7 September 2014  --  In 1845, Frederick Douglass, a fugitive from slavery, joined dozens of white passengers on the British ship Cambria in New York harbor. Somewhere out on the Atlantic, the other passengers discovered that the African American activist in their midst had just published a sensational autobiography. They convinced the captain to host a sort of salon, wherein Douglass would tell them his life story. But when the young black man stood up to talk, a group of Southern slaveholders, on their way to Britain for vacation or business or both, confronted him. Every time Douglass said something about what it was like to be enslaved, they shouted him down: Lies! Lies! Slaves were treated well, insisted the slaveholders; after all, they said, the masters remained financially interested in the health of their human “property”.

In a review of my book about slavery and capitalism published the other day, the Economist treated it the same way that the tourist enslavers treated the testimony of Frederick Douglass on that slave-era ship long ago. In doing so, the Economist revealed just how many white people remain reluctant to believe black people about the experience of being black.

Apparently, I shouldn’t have focused my historical research on how some people lived off the uncompensated sweat of their “valuable property”, the magazine’s anonymous reviewer wrote: “Almost all the blacks in his book are victims, almost all the whites villains.” Worst of all, this book reviewer went on, I had, by putting the testimony of “a few slaves” at the heart of book about slavery, somehow abandoned “objectivity”’ for “advocacy”.

Of course, the reviewer wasn’t treating me like the slaveowners on the Cambria treated Douglass. They threatened to kidnap him and send him to New Orleans – the largest slave market in North America. No, a single nameless reviewer from a single stodgy magazine couldn’t do much to me.

Still, the review enraged a significant number of people. Within a few hours, Twitterstorians scorched the earth of the magazine’s comments page with radioactive reviews of the review. The parodies and viral disdain forced the Economist to retract the review and issue a partial apology.

But the Economist didn’t apologize for dismissing what slaves said about slavery. That kind of arrogance remains part of a wider, more subtle pattern in how black testimony often gets treated – sometimes unknowingly – as less reliable than white. The Economist reviewer was saying that the key sources of my book, African Americans – black people – cannot be believed.

As the historian Jelani Cobb pointed out to MSNBC’s Chris Hayes on Friday night, the reviewer’s ideas about slavery’s history are not actually as uncommon as many of us would like to believe. He’s right: All across the American south, you can go to historic plantation sites still pushing the idea that slaves who had a “good” master were happy, and “faithful”.

If you write about the history of slavery, you become used to the pattern: No matter how many accounts you cite from ex-slaves, people often say they need more information before they can accept what former cotton pickers say about how cotton picking worked. And when we’re talking about contemporary events, the presumptive doubt is just as bad.

For instance: white people have had numerous opportunities, especially after Ferguson, to hear what African Americans think about how policing takes place when white civilians aren’t around. Yet twice as many white Americans as black Americans still think that police treat African Americans fairly.

Perhaps this is because, according to a recent survey, 75% of white Americans have zero black American friends. Surely if more white people knew more black people on a personal level, some would be more ready to accept the accounts from African Americans about how white privilege affects their own lives. Instead, we’ve still got white magazine writers refusing to believe first-person accounts of history, which re-enforces white privilege at the very time when we should be revoking it. In the meantime, both historians and advocates of contemporary change often have to turn to the strategy of getting white people to vet black testimony before other white people will believe it.

Back in 1845 on the Cambria, as the attackers surrounded Douglass, threatening to throw him overboard, he told the other white passengers that if they didn’t believe his words, he would speak the words of the enslavers. Straight from the book of state law in the south, Douglas read aloud those punishments allotted to slaves, then – “lashings on the back, the cropping of ears and other revolting disfigurements” – as now: “for the most venial crimes, and even frequently when no crime whatever had been committed”.  (source: The Guardian)
Posted by Ron at 5:32 AM