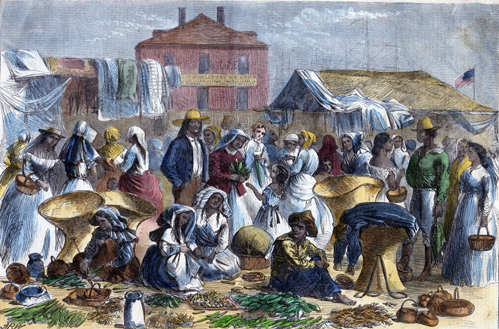 "Sunday in New Orleans, at the Market," an engraving by Alfred Waud, appears in Lawrence Powell's "The Accidental City," courtesy of The Historic New Orleans Collection

From NOLA, "Lawrence Powell packed his New Orleans history with fun facts and surprising figures," by Chris Waddington, on 15 April 2012  --  Lawrence Powell’s “The Accidental City” offers a continuous narrative of life in colonial New Orleans — and it’s also a treasure trove of interesting facts and figures. Here are some nuggets lifted from the text.

“From 1717 to 1720, Paris made deportation its official overseas policy, with Louisiana ... becoming the preferred destination. ... As many as one-fourth of the original male colonists of New Orleans were convicts, smugglers, and deserters, an estimate borne out by chronic complaints concerning the quality of early settlers.”

“New Orleans in 1791 had twice as many tavernkeepers as it did merchants. On a per-capita basis, the ratio of bars to people was off the charts ... If there was a wetter town anywhere in the Western Hemisphere, it had yet to be found.”

“Sunday was when marketing by slaves blazed to life. On Sundays, after Mass, they would spill into the public space of the Plaza d’Armas to display not only their wares but themselves. Sunday market was the time set aside for dressing to the nines, for showing off, with swagger and strut, up-to-the-moment fads in clothing and hairstyles, from turbans of many colors to rainbows of ribbons ... And almost everything had been accessorized to underscore not just vestiges of an African identity but an unvanquished individuality.” “‘Gambling in New Orleans is reduced to a profession,’ observed an American officer during an official tour of the Louisiana territory shortly after its cession to the United States. That may explain why 54,000 packs of playing cards had been imported in 1802 into a town comprising scarcely more than 8,000 inhabitants.”