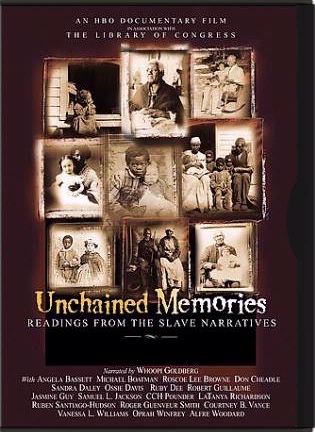 
Review Summary  --   Among the tasks undertaken by the WPA's Federal Writers' Project in the 1930s was to transcribe the memories of those former African-American slaves who were still living. The result was a massive collection of notes, documents, and recordings, all of which found their way into the Library of Congress. Co-produced by the Library and the HBO cable channel, Unchained Memories: Readings From the Slave Narratives features a truly impressive array of black actors and actresses verbally recreating the reminiscences of those who lived under the yoke of slavery. The performers themselves appeared in modern dress, standing before a neutral background as they read from the transcripts, while directors Ed Bell and Thomas Lennon complemented the words with vivid and disturbing images culled from contemporary photographs of the years 1850-1935. Tied in with a traveling museum exhibit of photos and recordings, Unchained Memories was telecast during Black History Month, 2003. ~ Hal Erickson, Rovi [source: The New York Times]