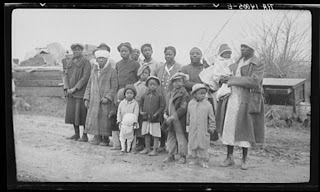 One wintry morning in January 1939, residents of southeastern Missouri awoke to a startling sight. More than 1,000 sharecroppers - mostly African American but whites too - had camped out alongside two state highways with their families and a few meager belongings. They were taking a stand - against the planters, the federal government, and the desperate conditions of their lives.

Their tale, encapsulates the saga of rural African American life since Emancipation: how Black farmers' back-breaking efforts to become self-sufficient were continually undermined by patterns of land-ownership, swindling planters and misguided government policy; how a debt cycle induced by sharecropping condemned them to wretched poverty; and how attempts by sharecroppers to organize and improve their lot were met with often-bloody white opposition.

The final straw for these sharecroppers came when they were evicted by planters out to pocket New Deal depression farm subsidies for themselves. The Rev. Owen Whitfield, a cropper and part-time preacher who became vice president of the Southern Tenant Farmers' Union, began to organize the desperate farmers. "Take your eyes out of the sky," Rev. Whitfield preached, "because someone is stealing your bread." Many white sharecroppers also recognized that their interests lay with Rev. Whitfield and joined in his roadside protest strike despite the racist pressures of Jim Crow.

Day after day, the protesters huddled in tents with little protection against the frigid cold. The American Red Cross refused to help, calling their struggle "a man-made" disaster. Rev. Whitfield was forced to flee because of threats against his life. But as Rev. Whitfield had hoped, dramatic photos, newspaper stories, and newsreels brought their plight to the nation. An embarrassed state government sent troopers to haul the protesters away to sites far from public view. "Concentration camps," the protesters called them. But students from historically black Lincoln University and activists from St. Louis Committee for the Rehabilitation of the Sharecroppers were attracted to the cause. With their assistance, some sharecroppers, still led by Owen Whitfield, established a cooperative farming community called Cropperville. And the Farm Security Administration was pressured to create ten other communities for sharecroppers in the Missouri Bootheel. Government officials and even planters began to discuss ways to help the sharecroppers.

After the changes wrought by WWII and mechanization, residents began moving away from Cropperville and the other communities, many joining the migration North. But their protest demonstrated that ordinary people can do extraordinary things. Despite the odds they organized themselves, shut down a highway, attracted national attention, and changed government policies.  [http://whgbetc.com/mind/sharecroppers-strike-1939.html]