Lincoln–Haters of the Libertarian Right

From The Daily Beast, "The Rancid Abraham Lincoln–Haters of the Libertarian Right," by Rich Lowry, on  17 June 2013 --  The small but foul pro-Confederacy strain on the right has proven stubbornly perverse, writes Rich Lowry.

When John Wilkes Booth jumped from the balcony at Ford's Theatre after shooting President Lincoln, he famously shouted, "Sic semper tyrannis." There's an element of the contemporary right that may disagree with the assassin's method, but certainly agrees with his sentiment.

It is the Lincoln-Hating Right. You can't belong unless you feel a compulsion to write "bloody-minded tyrant" immediately before or after the name "Abraham Lincoln." Some members of this fraternity are old-style Lost Cause romantics, deluding themselves about the “War for Southern Independence,” as some Southerners have been doing since about 1866, while others are a peculiar breed of libertarian.

Libertarianism is supposed to make the Republican Party sleek and modern, but this variant of the creed—associated with Ron Paul—is stubbornly perverse and highly unappealing.

The dean of the Lincoln-haters is Thomas DiLorenzo, an economics professor at Loyola College in Maryland, who writes books and gives talks about the man he cleverly calls "Dishonest Abe" and believes was guilty of treason. His scholarship, such as it is, consists of rummaging through the record for anything he can find to damn Lincoln, stripping it of any nuance or context, and piling on pejorative adjectives. In DiLorenzo, the Lincoln-haters have found a champion with the judiciousness and the temperament they deserve.

He contributes to the website LewRockwell.com, the eponymous fever swamp of Lew Rockwell, who is widely suspected of having written Ron Paul's racist newsletters. Rockwell now serves on the board of the new Ron Paul foreign-policy think tank, the Ron Paul Institute for Peace and Prosperity.

As a window into the DiLorenzo method, consider his treatment of Lincoln and race. In a recent posting, he deemed Lincoln "an obsessive white supremacist." Not just a white supremacist, mind you, but an "obsessive" one. For this proposition, he collects various Lincoln statements in opposition to black civil rights. The quotes are accurate enough, but denuded of context, they are stupidly and willfully misleading.

For instance, Lincoln said, "I have no purpose to introduce political and social equality between the white and black races." How could he say such a thing? Well, he said it in his debates with Stephen Douglas, when he was playing defense. Douglas used every low-down bit of demagoguery he could muster to portray Lincoln as favoring a full racial equality, including the dreaded prospect of putting blacks "on social equality with your wives and daughters," that was politically poisonous, especially in the most contested parts of the states.

In relentlessly arguing that blacks were among the men deemed "created equal" in the Declaration of Independence, Lincoln was testing the outer limits of what was politically sustainable. In a speech in Chicago that Douglas repeatedly attacked, Lincoln said, “Let us discard all this quibbling about this man and the other man—this race and that race and the other race being inferior, and therefore they must be placed in an inferior position ... Let us discard all these things, and unite as one people throughout this land, until we shall once more stand up declaring that all men are created equal.” If DiLorenzo the friend of civil rights is appalled when Lincoln falls short of contemporary standards of racial tolerance, surely he must be heartened and inspired when he transcends the limits of his own day, when he defends the natural rights of blacks and their humanity, when he denounces the "tendency to dehumanize the negro—to take away from him the right of ever striving to be a man."

But on this and so much else, DiLorenzo is silent. In his rancid book-length indictment of Lincoln, The Real Lincoln, he favorably cites John C. Calhoun without pausing to inquire whether the South Carolinian might, perhaps, just have been a little bit racist.

This is the distorted prism through which the Lincoln-haters view everything. Lincoln is condemned in the harshest terms; his opponents and his enemies are given a pass.

It doesn't figure much in their calculations, either, that Lincoln sought the ultimate end of slavery, while Jefferson Davis wanted to preserve it. The Lincoln-haters will admit slavery is wrong, but their denunciations of it have all the moral force of someone complaining about his cable bill, and considerably less passion.

Operationally, they are pro-Confederacy. Their influence shouldn't be exaggerated. The vast majority of people will never hear of them. They exist only as a small but foul temptation on the right. If American conservatism ever wants to commit suicide, they offer the ready means. And it begins with the root-and-branch rejection of Abraham Lincoln. 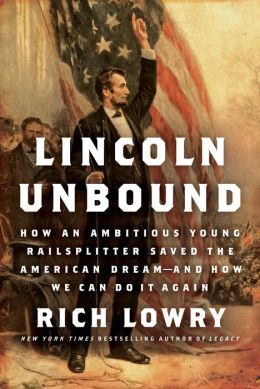 Rich Lowry, Editor at National Review, is the author of Lincoln Unbound: How an Ambitious Young Railsplitter Saved the American Dream—and How We Can Do It Again, on sale June 11 from Broadside Books, an imprint of HarperCollins.  (source: The Daily Beast)