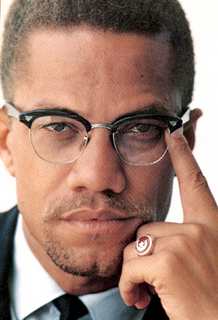 One of the reasons that it is bad for us to continue to just refer to ourselves as the so-called Negro, that's negative. When we say so-called Negro that's pointing out what we aren't, but it isn't telling us what we are. We are Africans, and we happen to be in America. We are not Americans. We are a people who formerly were Africans who were kidnaped and brought to America. Our forefathers weren't the Pilgrims. We didn't land on Plymouth Rock; the rock was landed on us. We were brought here against our will; we were not brought here to be made citizens. We were not brought here to enjoy the constitutional gifts that they speak so beautifully about today. Because we weren't brought here to be made citizens--today, now that we've become awakened to some degree, and we begin to ask for those things which they say are supposedly for all Americans, they look upon us with a hostility and unfriendliness.

So our unwanted presence--the fact that we are unwanted is becoming magnified in all of America's preachments today and the only way that we who are...[interruption]

The first step for those of us who believe in the philosophy of Black Nationalism is to realize that the problem begins right here. The first problem is right here. We have to elevate our thinking right here first--not just the thinking of a handful, that won't do it. But the thinking of 22 million black people in this country must be elevated. They must be made to see it as we see it. They must be made to think as we think, and then they'll be ready to act just as we're ready to act.

The black nationalists don't realize this. The black nationalists will fail as other groups have failed. Any philosophy that you have that can't be implemented is no good. A "preaching" or a gospel is no better than its ability to be carried out in a manner that will make it beneficial to the people who accept it.

What is it that makes it difficult for the philosophy of nationalism to spread among the so-called Negroes? Number one, they think they have a stake in America. They think they have an investment in this country. Which we do: We've invested 310 years of slave labor. 310 years, every day of which your and my mother and father worked for nothing. Not eight hours a day--there was no union in that day. They worked from sunup until sundown--from can't see in the morning until can't see at night. They never had a day off! And on Sunday they were allowed to sit down and sing about when they died they wouldn't be slaves no more-- when they died, they wouldn't be slaves no more. They'd go up in the sky and every day would be Sunday. That's a shame.

And it is that 310 years of slave labor that was my and your contribution into this particular economy and political system.

You and I should let them know now that either we collect our investment right here, right now, and then if we can't collect it here, our people will then be ready to go back home. Let's go ahead and join in with them and make these men pay these back wages. Make him give us the back pay. 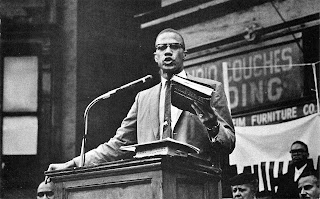 So what you and I have to do is get involved. You and I have to be right there breathing down their throats. Every time they look over their shoulders, we want them to see us.

In order to do this, we're starting a voters' registration drive. We have to get everybody in Harlem registered, not as Democrats or Republicans, but registered as Independents. We're going to organize a corps of brothers and sisters who, after this city is mapped out, they won't leave one apartment-house door not knocked on. There won't be a door in Harlem that will not have been knocked on to see that whatever black face lives behind that door is registered to vote by a certain time this year. Nobody will have an excuse not to be registered. We'll ask him to let us see your card. If you don't have the sense of responsibility to get registered, we'll move you out of town.

It's going to be the ballot or the bullet...