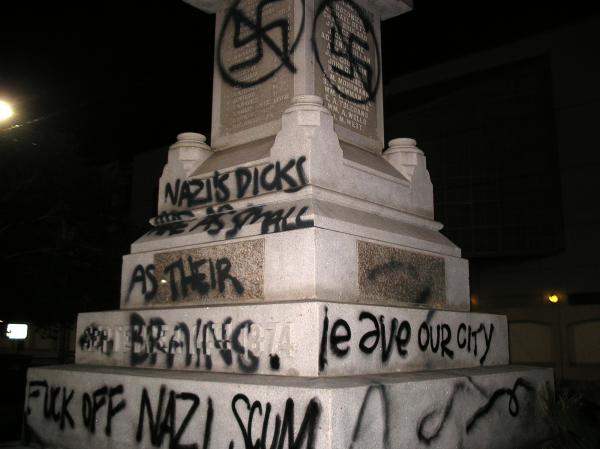 The uprising of white Democrats against the biracial Republican administration that ruled Louisiana after the Civil War raged through the downtown streets and ended with 32 dead on both sides. Within few years the whites here, and throughout most of the South, regained power and held it for almost a century.

Now a debate has emerged over a monument built in 1891 to commemorate the original battle. Three years ago, street repairs required the obelisk's removal from its spot at the foot of Canal Street near the French Quarter along the city's main shopping area. The issue is whether to take it out of storage, and where to put it now that a huge gambling casino is being planned near where the monument once stood.

Over the years, the gray granite obelisk has meant different things to different people. To some it recalls a glorious fight that drove out the carpetbaggers, as the politicians of the Reconstruction years were often called. Others acknowledge that it is a hateful symbol of white supremacy, but say it is also history, which should be preserved no matter how mean.

From time to time, the obelisk has been a rallying point for the Ku Klux Klan and for one of its Grand Wizards, David Duke. Civil rights advocates have rallied against the obelisk. The city's first black mayor, Ernest N. Dutch Morial, tried to remove it.

The monument cannot be junked, as many people here say they would like, because Federal funds were used in its removal as part of the road project. Federal guidelines require the monument's reconstruction in an appropriate spot.

The city missed two 1991 deadlines set by the state for resurrecting the obelisk. Many people suspect city officials did not want to put it back because it was an embarrassment, especially in the racially tense days of Mr. Duke's 1991 campaign for Governor. And racial tensions have continued this year during attempts to integrate Mardi Gras.

The current phase of the battle is occurring in Federal District Court here, which has set a Dec. 9 deadline for the city to pick a new site.

A New Orleans pharmacist, Francis J. Shubert, decided to sue the city, the state and the Federal Government to force the monument's resurrection. Mr. Shubert is a strong supporter of Mr. Duke.

According to the court file, Mr. Shubert has an ancestor who fought in the Liberty Place battle. In a court agreement, Federal Judge A. J. McNamara ruled that there would be a trial in February on the issue unless the city decides where to put the obelisk by the deadline and has it in place by Jan. 20. The battle in 1874 and the days that followed "signaled the beginning of the end of Reconstruction in Louisiana," Judith K. Schafer, a historian at Tulane, told members of the Louisiana Historical Society at a meeting last month.

Dr. Schafer, a consultant to Mayor Sidney Barthelemy in efforts to find a new site, said, "To destroy the monument would be an act of intellectual and historical dishonesty." But she added, "To restore it in its historically correct place, at the foot of Canal Street," would be seen as as an insult to the black majority of New Orleans.

In a recent column, Keith Woods, city editor of The Times-Picayune wrote: "Put the Liberty Monument back. Do it to preserve the truth. Do it for white children."

Mr. Woods, who is black, wrote: "Black parents will always have to explain prejudice, with or without monuments. We can go on hiding each new shameful monument to failed race relations. But one day we'll run out of warehouse space. And then what?"

"I'd rather throw it in the river," said Betty Wisdom, a white Democrat, "than put it back up." She believes "the monument represents an ugly myth and an uglier attitude."

Ms. Wisdom, who descends from a veteran of the battle, explained her views toward the "loathsome" monument in a recent letter to Gambit, a weekly newspaper. Her father, she wrote, told her the monument was a fraud and that "the battle which drove out the carpetbaggers' had done nothing of the sort." Her father said the same thing to a group of descendants of Liberty Battle veterans and, she said, "One of them tried to hit him with a walking stick."

Alfred Stokes, executive assistant to the Mayor, said the monument represents a dark moment in city history and the dispute over it has drained city energies, but officials never considered discarding it. "If we throw it in the river, we run the risk of forgetting and reliving it," he said.(source: The New York Times, Copyright 2013 The New York Times)
Posted by Ron at 12:04 PM