Edward A. Pollard - The Lost Cause

"The Lost Cause"  --  Edward A. Pollard wrote the "new southern history of the war of the Confederates" in 1866. Below are excerpts from that text. A former newspaper editor, Pollard criticized Davis for being a weak leader. Pollard was later named professor of Southern history at the University of Virginia.

Mr. Jefferson Davis had resigned from the Senate of the United States to encounter a responsibility and accept a trust the greatest of modern times. Public opinion in all the seceded States had long designated him as the leader of their new destinies. A convention of delegates from the then eight seceded States assembled in Congress at Montgomery, Alabama, on the 4th of February, 1861, for the purpose of organizing a provisional government. This body adopted a Constitution for the Confederate States on the 8th of February. On the 9th of February, Congress proceeded to the election of a President and Vice-President, and nnanimously agreed upon Jefferson Davis, of Mississippi, for President, and Alexander O. Stephens, of Georgia, for Vice-President. Edward Alfred Pollard was a pro-slavery lawyer, writer, journalist and U.S. Congressional Judiciary Committee Clerk who became a principle editor of the Richmond Examiner at the beginning of the Civil War.

The framers of the new government at Montgomery studiously adhered, in the main features of their plan, to the Washington model ­ but the Constitution adopted by them differed in some particulars from that of the United States. And it is to be remarked that at every point of difference it made an undoubted improvement, or corrected some acknowledged evil of former times. The Confederate Constitution absolutely prohibited the over-sea slave-trade; that of the United States did not. It permitted cabinet ministers to take part in the discussions of Congress. It prohibited bounties or duties to foster any branch of industry. After a specified time the post-office was required to cover its own expenses. No extra compensation was to be paid to any contractor. The President was to hold office for six years, and was not to be reeligible. The subordinate government officers were not to be removed by the President without a report to the Senate giving his reasons. The right of property in slaves and that of taking them into any Territory were expressly stated; but in this, it was claimed that no new principle was adopted or laid down, which did not already exist in the Constitution of the old Union. 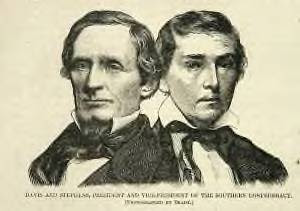 
The choice of President was thought at the time to be quite as fit and admirable as the other work of the Convention. But of this, the most serious doubts were hereafter to arise. Jefferson Davis, the President of the Confederate States, was a name that was associated with much that was brilliant and honourable in the history of the old government. He had served that government in the field and in council. IIe had received a military education at West Point; had served in the Mexican War, at the head of a regiment of volunteer riflemen, winning distinction at Monterey and Buena Vista; and had been called to the cabinet of President Pierce, as Secretary of War; in the administration of which office he increased the strength of the United States army, proposed to abolish the permanent staff-organization for one of details on staff-duty, and sent to the Crimea a commission to report upon the state of the science of war, and the condition of European armies. He re-entered political life as a Senator in Congress. In that highest school of debate in America, he was distinguished for a style of polished and graceful oratory; and speaking in moderate rhetorical figures, and in subdued tones, he was never the flaming fanatic or popular exhorter, but just the speaker to address with agreeable effect a small assembly of intelligent and cultivated persons.

Mr. Davis was a man whose dignity, whose political scholarship, whose classical and lofty expressions, whose literary style-unexcelled, perhaps, in the power of statement by any contemporary model,-whose pure morals, well-poised manners and distinguished air, were likely to adorn the high station to which he had been raised, and calculated to qualify him, in many striking respects, as the representative of the proud and chivalrous people of the South. But these accomplishments concealed from the hasty and superficial view defects of character which were most serious, indeed almost vital in their consequences, and which were rapidly to be developed in the course of his administration of the new government. His dignity was the mask of a peculiar obstinacy, which, stimulated by an intellectual conceit, spurned the counsels of equal minds, and rejected the advice of the intelligent, while it was curiously not inconsistent with a complete subserviency to the smallest and most unworthy of favourites. His scholarship smelt of the closet. He had no practical judgment; his intercourse with men was too distant and constrained for studies of human nature; and his estimate of the value of particular men was grotesque and absurd. The especial qualifications of a great leader in the circumstances in which Mr. Davis was placed would have been strong and active common-sense, quick apprehension, knowledge of men, and a disposition to consult the aggregate wisdom of the people, and to gather the store of judgment from every possible source of practical advice within its reach. Mr. Davis had none of these plain qualities. He had, instead of these, certain elegant and brilliant accomplishments, which dazzled the multitude, confused the world in its judgment of his merits, and gave him a singular reputation, in which admirers and censors were strangely mingled: one party, looking at a distance, extravagant in its praise, the other, having a nearer view, unlimited in its condemnation. 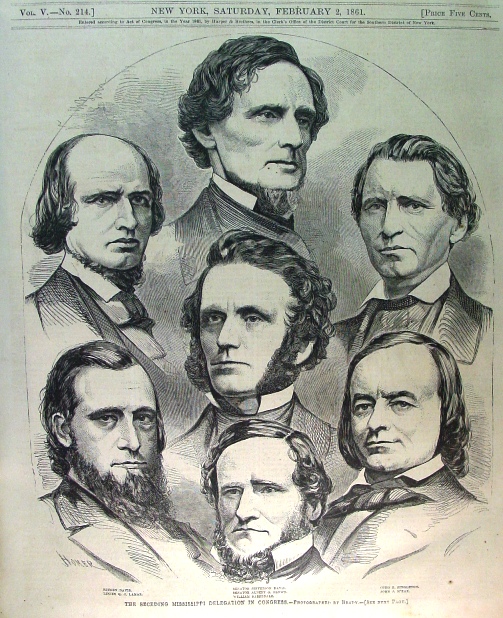 No one who lived in Richmond during the war can ever forget these gloomy, miserable days. In the midst of them was to occur the ceremony of the inauguration of the Permanent Government of the Confederate States. It was only a difference of name between two governments, one called Provisional and the other Permanent; for Mr. Davis had been unanimously elected President, and there was no change either of the organic law or of the personnel of the Administration. But the ceremony of the second inauguration of President Davis was one of deep interest to the public; for it was supposed that he might use the occasion to develop a new policy and to reanimate the people. The 22d of February, the day appointed for the inauguration, was memorable for its gloom in Richmond. Rain fell in torrents, and the heavens seemed to be hung with sable. Yet a dense crowd collected, braving the rain-storm in their eager interest to hear the President's speech from the steps of the Capitol. "It was then," said a Richmond paper, "that all eyes were turned to our Chief; that we hung upon his lips, hushing the beating of our heavy hearts that we might catch the word of fire we longed to hear-that syllable of sympathy of which a nation in distress stands so in need. One sentence then of detiance and of cheer-something bold, and warm, and human-had sent a thrill of lightning through the land, and set it ablaze with the fresh and quench less flame of renewed and never-ending fight. That sentence never came. The people were left to themselves." 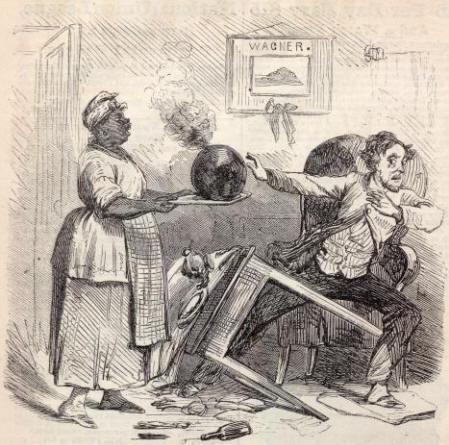 The Confederate President offered but little of counsel or encouragement to his distressed countrymen. He declared that the magnified proportions of the war had occasioned serious disasters, and that the effort was impossible to protect the whole of the territory of the Confederate States, sea-board and inland. To the popular complaint of inefficiency in the departments of the Government, he replied that they had done all which human power and foresight enabled them to accomplish. He lifted up, in conclusion, a piteous, beautiful, appropriate prayer for the favour of Divine providence. (source: Virginia Xroads)


The Colbert Report
Get More: Colbert Report Full Episodes,Political Humor & Satire Blog,Video Archive
Tuesday April 13, 2010, The Cobert Report, "The Word - The Lost Cause"
Every time Southerners try to celebrate Confederate heritage, Yankees ruin it by mentioning the s-word.
Posted by Ron at 5:18 PM