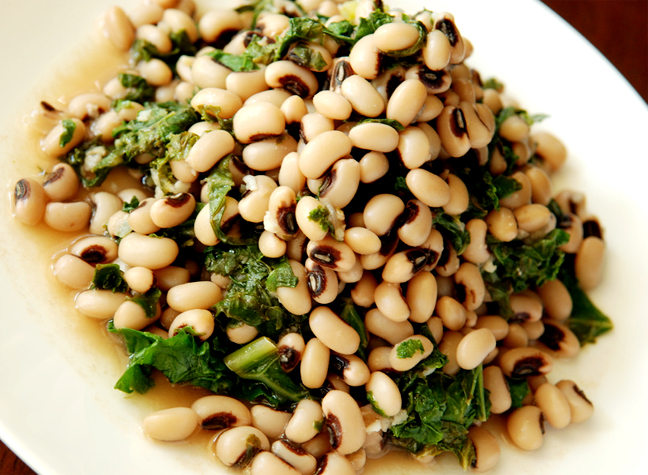 As reported in the Washington Post, "Hoppin’ John, a New Year’s tradition born from slavery," by Tim Carman, on 27 December 2011-- The hoppin’ John cassoulet on his New Year’s Eve menu at the Tabard Inn might give you the wrong impression about chef Paul Pelt. It might lead you to think that Pelt believes in random, mercurial luck. He doesn’t. The unusually taciturn cook — I’d call him shy if it weren’t for his occasional bursts of pointed humor — believes in divine providence over luck.

No, Pelt’s interest in one of the American South’s great superstitions — that annual ritual of eating black-eyed peas to bring good fortune for the new year — is purely culinary. “I don’t really believe in luck,” he deadpans. “I just like eating pork and beans.”

If you took a poll, many eaters would probably fall into Pelt’s camp. Few, I trust, expect to win the Powerball after devouring a dish of hoppin’ John swollen with slow-cooked black-eyed peas. I suspect any fascination over the dish is 1 part camp, 2 parts gustatory pleasure and 97 parts tradition. A desire for black-eyed peas around New Year’s does not automatically assume you believe in the Deep South version of Jack’s magic beans. The good-luck tradition tied to black-eyed peas is a curious one, given the bean’s history. Like the people who first loved the legume, black-eyed peas were a product of the slave trade. The men and women of West Africa, who were dragged involuntarily to the United States, were sought for their knowledge of rice cultivation.

In their search for a profitable crop, Southern plantation owners “tried everything they could,” says food historian and cookbook author John Martin Taylor (a.k.a. “Hoppin’ John”), during a phone interview from his new home in Bulgaria. “Rice happened to do really well there. That’s what then effected the slave trade. They specifically brought West Africans from rice-growing regions.”


And those West Africans, the literature so often notes, brought their food with them — except they didn’t, as food writer John Thorne so eloquently points out in his now-classic essay on hoppin’ John in the “Serious Pig” collection (North Point Press, 1996): “The only thing Africans brought with them was their memories. If they were fortunate enough to have been taken along with other members of their own community and to stay with them (which rarely happened) — there was also the possibility of reestablishing out of these memories some truncated resemblance of former rituals and customs.” 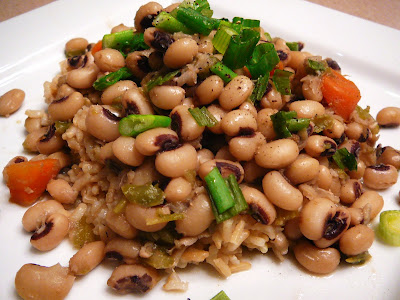 It was in all likelihood the slave traders who started to import black-eyed peas to the United States as some sort of backhanded charitable act to appease their unhappy charges during the long and often deadly journeys across the Atlantic. In the American South, with both rice and black-eyed peas available, the natives of West Africa could prepare a dish that reminded them of home: a humble combination of rice and beans that eventually became known as hoppin’ John.

Much has been written about the origin of the name. Most of the theories, as Taylor wrote in a recent essay about the dish for Gastronomica, are merely “fake­lore,” because “they are based on neither fact nor historical record.” One such theory supposes the dish earned its name from children hopping around the table before they could eat their beans and rice. (Please.) Another describes a hobbled man by the name of Hoppin’ John who sold the dish on the streets of Charleston, S.C. Thorne believes the name is a corruption of the French term for pigeon peas, “pois a pigeon,” while the late food historian Karen Hess thought the name derived from “the old Persian bahatta kachang, meaning cooked rice and beans,” Taylor wrote in his essay.

If writers and scholars disagree on the origin of the name, at least they have something to argue about. There are virtually no established theories about how hoppin’ John came to symbolize good luck, or how eating it would provide good luck for the coming year. Some point to the notion that the peas resemble coins, which would be true if our pocket change looked like jellybeans. Others note that hoppin’ John typically is served with braised collard greens, which popularly symbolize paper money.

Taylor suggests that the tradition might (emphasis on “might”) have started during that fallow period between Christmas and New Year’s Day, when slaves were given time off. The harvest season was essentially over, the planting season yet to come. It was a good time to give thanks for past crops, Taylor says, and raise expectations for the coming season. Such a ritual could have developed into a good-luck tradition, with the slaves’ favorite dish of hoppin’ John as the centerpiece.

Then again, as Taylor notes, “a historian of belief systems, superstitions and traditions I’m not.” 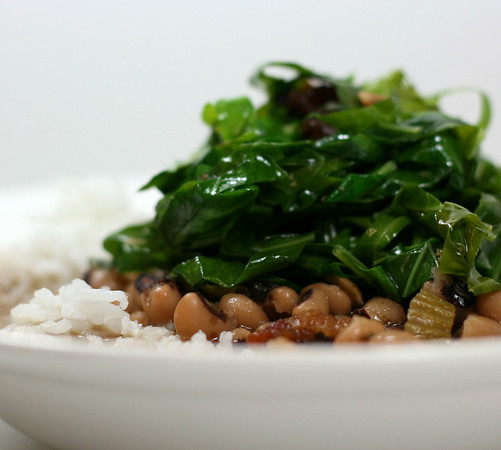 The historian stands on firmer ground when discussing what, to me, is the most fascinating part of the hoppin’ John story: the dish’s migration from slave table to slave owner table. Taylor believes it was a natural evolution, given that slaves often served as cooks to the plantation owners. “These wealthy families, they weren’t eating the grand food” every night, the historian says. “They would have been eating hoppin’ John and corn pone and grains.”

Hoppin’ John has that ability to worm its way into your life, even if it wasn’t part of your family’s tradition. Perhaps the combination of rice and beans is so universal, so nutritious and so satisfying that, on some level, the human body just craves it. In one form or another, rice and beans can be found on tables from Africa and India (try the black-eyed peas and pumpkin dish at Passage to India in Bethesda) to the Caribbean and the American South.

Tabard Inn’s Pelt, 52, didn’t grow up eating hoppin’ John. He’s a Chicago native whose parents were born in the Second City. Southern cooking was not a regular part of his diet, even though Pelt’s grandparents, on both sides of the family, were from the South. Pelt moved to the District in 1973 to live with his father, who had a healthy appreciation for food and was known to prepare a plate of collard greens from time to time. Pelt fell into the restaurant business along Pennsylvania Avenue SE, busing tables, washing dishes and doing prep. Like so many in the industry back then, he worked his way onto the kitchen line.


Pelt eventually landed a cooking job in the 1990s at the Tabard Inn (the first of two runs for him there), where chefs Stacy Cosor and David Craig took the untrained cook under their wing. They encouraged him to read as many cookbooks as he could get his hands on. “I always liked cooking, but reading made me start thinking how American food got to be what it is — all the different influences on what we cook.” 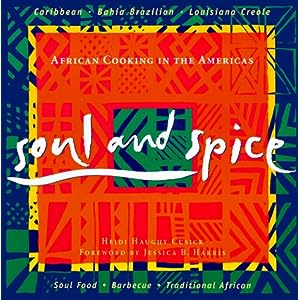 The book that really deepened Pelt’s appreciation for Southern food was Heidi Haughy Cusick’s “Soul and Spice” (Chronicle Books, 1995). “It’s about the cooking of Africans in the Americas,” he says. “Around the same time I got that book, I went to Nigeria for the first time, for like three weeks. . . . That was really an eye-opener for me: just the history of how the slave trade affected what we eat and what people eat in the Caribbean, what people eat in Brazil and the American South.”

Many years later, Pelt is creating his own fusion of cultures with his hoppin’ John cassoulet, which combines African and American traditions with the classic French stew. Aside from substituting black-eyed peas for the more traditional cannelloni or flageolet beans in cassoulet, Pelt also puts a Southern twist on the proteins in the dish. He retains the Toulouse sausage and duck confit but replaces the lamb and roast pork with ham hocks and pork shanks. The result is a deep, smoky, satisfying winter dish: perfect, I’d say, for many other occasions besides New Year’s. There’s just one ingredient missing from Pelt’s chef-driven hoppin’ John: the rice. He says the grains are a casualty of his multi-course New Year’s Eve meal. “Because it’s an appetizer,” he says about his cassoulet, “I don’t want to make it too filling.”

So given Pelt’s feelings about luck, will he include a mention of the hoppin’ John tradition on his New Year’s Eve menu at the Tabard Inn?

“I’ll tell the waiters the story: that people believe, or that people used to believe . . . that it’s good luck,” Pelt says. “But I won’t say, ‘Hey, it really is. You guys should eat some before you go out there tonight. You’ll make a lot of tips.’ ”  (source: Washington Post)
Posted by Ron at 8:31 AM