A Slave Shackle In Kansas 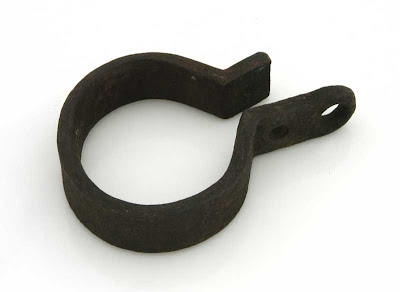 From the Kansas Historical Society, "Slave Shackle," One man chose to break the law by cutting this shackle from an enslaved person's ankle.


Escaped slaves crossed the Missouri border into Kansas Territory in increasing numbers after 1857. Some continued north into free states or Canada, but others stayed in Kansas hoping to start new lives in freedom.

This shackle is a very rare object and illustrates the efforts of both Blacks and Whites in opposing slavery. In 1860 Robert McFarland was asked by a neighbor to help rescue an abused slave at Lexington, Missouri. As a blacksmith, McFarland had the necessary tools to cut the shackle from the slave's leg. Many years later, when donating the shackle to the Society, McFarland wrote a letter describing the incident:

"As near as I can recollect it was in the fall of 1860 at Lexington, Mo., that a Virginian came to me stating that James Hicklin--a rich farmer living 4 miles east of Lex. & who (while an honest dealing man was very hard on his slaves) was treating an old slave in a barbarous manner & that he thought the slave should be relieved of the torture. . . . I told my informer to conduct the Negro to my shop in the night & I would take the shackle from his leg.

"Late in the night they came and I found an old Negro man--partly grey haired--apparently 60 years of age--around whose leg (I think the left one) was riveted [sic] a heavy shackle to which was attached what seemed like a trace chain. On the other end of the chain--about 5 ft from the shackle--was a heavy iron ball weighing about 20 lbs which the Negro (when going to or from his work) was obliged to carry by placing the chain over his shoulder with the ball hanging behind. His shin & ancle [sic] was very sore from the constant rubbing of the iron (although somewhat protected by rags wound around the parts). The appearance of the leg & ancle with the offensive smell emitted from the sores so aroused our sympathies that [we] wished we could change the irons from the slave to the master."

McFarland removed the ball and chain and threw them into a nearby well, then buried the shackle near his foundry to hide what he had done because the Fugitive Slave Act of 1850 made it a federal crime to aid escaping slaves. The slave probably escaped to Kansas by walking upstream along the Missouri River, a favorite route of those held in bondage on farms along the waterway. By this time, several Kansas cities on the border were the preferred destinations of fleeing slaves. This is particularly true of Leavenworth and Fort Scott, where army forts offered protection and opportunities for employment. The free Black population of Leavenworth alone grew from 14 in 1855 to 192 in 1860.

The Civil War began just a few months after McFarland freed the unnamed slave. He made shot for the Union forces during the war and, after the conflict, his wife Olive Edwards McFarland operated a school for African American children in the basement of their house in Lexington. The McFarland family moved to Kansas in 1871, eventually settling in Wichita where Robert opened a foundry and machine shop. They brought with them the shackle, which Robert had dug up at the end of the war. In 1893 he donated it to the Society as "a memento of slave times." It is on display at the Kansas Museum of History.  (source: Kansas Historical Society)
Posted by Ron at 4:50 AM