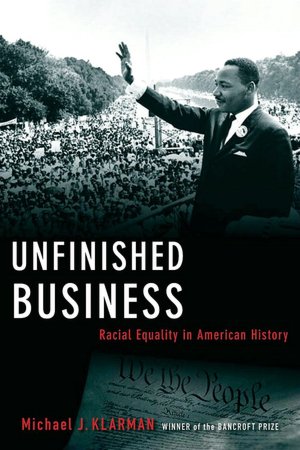 
From the University of Virginia, "U.Va. Law Professor Michael Klarman's Book Explores Uneven Road of Racial Equality in America,"  19 November 2007 — In his new book, “Unfinished Business: Racial Equality in American History,” University of Virginia law professor Michael Klarman traces the long and turbulent history of race relations in America. The book follows up Klarman’s “From Jim Crow to Civil Rights: The Supreme Court and the Struggle for Racial Equality,” which in 2005 won the prestigious Bancroft Prize, one of the most coveted honors in the field of history.

The slow judicial progress of racial equality in the United States shows a side of history many don’t know, Klarman said. “Americans in general are deficient in their historical knowledge,” he said. “I have students all the time tell me that they’re just shocked at how recently things were as bad as they were.”

In his book, published by Oxford University Press, Klarman looks at a judicial system historically in tune with the mores of the times. “It used to be accepted throughout the United States that holding property in human beings was OK,” Klarman said. “That wasn’t just a Southern view; if you go back before the Revolutionary War, it’s what most Northerners thought,” he said. As Klarman points out in his book, even Quakers in Pennsylvania held slaves.

“Unfinished Business” also shows how politicians and judges are driven by popular opinion to modify or abandon their own beliefs. “For us it seems obvious: The right thing to do was to end slavery, but it was always much more complicated,” Klarman said. He explained that this attitude continued well into the 20th century. Franklin Delano Roosevelt understood that “if he had promoted civil rights legislation it would have destroyed his administration. You can pursue your own agenda, but if it’s unpopular it could ruin your capacity to get anything else done,” he said.

According to Klarman, the majority decision in the 1954 Supreme Court ruling on Brown v. Board of Education might have been different had the case come to the court earlier. “If public opinion is set against a certain reform, there’s just no way you can make it stick, and the Supreme Court understands that,” he said. “Justice Frankfurter was very candid: If Brown had come up 10 years earlier he would have voted the other way because he didn’t think anyone would accept it.” Klarman noted that, in the aftermath of Brown, widespread exposure in the media, particularly television in the 1960s, helped galvanize public opinion in favor of integration and against the violent resistance of white supremacists. “What mattered hugely was that in 1963 everyone had a television and in 1953 almost nobody did. I think it’s very possible that the Civil Rights Movement plays out very differently had it not been for television,” he said.

Progress in racial equality, as Klarman sees it, is still slow. “As late as 1990 there was not a single jurisdiction in the South of all the counties and cities and thousands of elected officials … where a black person represented a majority white constituency.” Klarman noted Virginia’s role in breaking through this electoral barrier. “The fact that Doug Wilder, an African-American, could win a statewide election in a state that’s only 18 percent black is pretty good.”

Now, according to Klarman, the emergence of a large and growing Latino-American population nationwide and Asian-American population in the West complicates the issue for African-Americans. “We’ve seen in the last couple of election cycles both parties trying hard to adopt policies that were seen as attractive to Latinos. They have become the swing voters from the perspective of the Democratic and Republican parties. That disadvantages African-Americans [because] the Democratic Party can take black votes for granted,” he said. Despite the obvious advances, Klarman said that progress in racial equality is uneven. “Fifty years ago nobody could have dreamed that the last two secretaries of state would be black, the chairman of the Joint Chiefs of Staff would be black, and those are incredible changes,” he said, adding, “On the other hand, Hurricane Katrina told us what life is like for a lot of poor black people in cities and we haven’t done much to fix it, and I don’t think we’d tolerate it if those were white people.”

Klarman sees no end to the unfinished business of racial equality. “The issues have changed and the terms of debate have changed, but race issues are still everywhere