Booker T. Washington: Mr. President and gentlemen of the Board of Directors and citizens. One third of the population of the South is of the Negro race. No enterprise seeking the material, civil, or moral welfare of this section can disregard this element of our population and reach the highest success. I must convey to you, Mr. President and Directors, and Secretaries and masses of my race, when I say that in no way have the value and manhood of the American Negro been more fittingly and generously recognized, than by the managers of this magnificent exposition at every stage of its progress. It is a recognition that will do more to cement the friendship of the two races than any occurrence since the dawn of our freedom. Not only this, but the opportunities here afforded will awaken among us a new era of industrial progress. 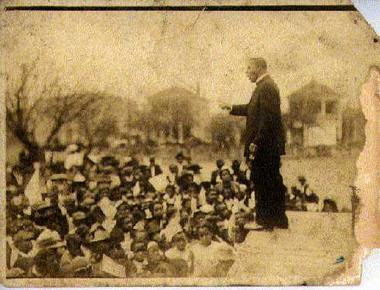 Ignorant and inexperienced, it is not strange that in the first years of our new life we began at the top instead of the bottom, that a seat in Congress or the state legislature was more sought than real estate or industrial skill, that the political convention of some teaching had more attraction than starting a dairy farm or a stockyard.

To those of my race who depend on bettering their condition in a foreign land, or who underestimate the importance of preservating friendly relations with the southern white man who is their next door neighbor, I would say: “Cast down your bucket where you are.” Cast it down, making friends in every manly way of the people of all races, by whom you are surrounded.

To those of the white race who look to the incoming of those of foreign birth and strange tongue and habits for the prosperity of the South, were I permitted, I would repeat what I have said to my own race: “Cast down your bucket where you are.” Cast it down among the eight millions of Negroes whose habits you know, whose fidelity and love you have tested in days when to have proved treacherous meant the ruin of your fireside. Cast down your bucket among these people who have without strikes and labor wars tilled your fields, cleared your forests, builded your railroads and cities, brought forth treasures from the bowels of the earth, just to make possible this magnificent representation of the progress of the South.