Broken Chains and Shackles On The Statue Of Liberty 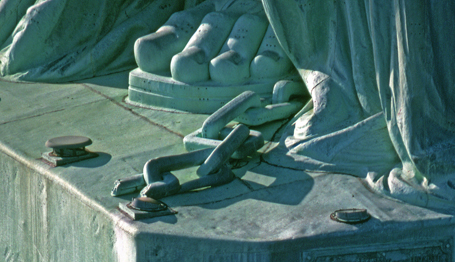 In 1886, The Statue of Liberty was a symbol of democratic government and Enlightenment ideals as well as a celebration of the Union's victory in the American Civil War and the abolition of slavery. Edouard de Laboulaye, the French political thinker, U.S. Constitution expert, and abolitionist, who first proposed the idea of a great monument as a gift from France to the United States was a firm supporter of President Abraham Lincoln and his fight for abolition. Laboulaye saw abolition not only as a way to eliminate immorality, but also as a way to protest repressive tendencies in France.

As an abolitionist, Laboulaye was an honorary member of the Philadelphia branch (founded in 1862) of the Union League Club. The Union league Club was a group of people who were dedicated to the new Republican Party, the Union's cause in the Civil War, and the abolition of slavery. Additionally, Laboulaye was a cofounder and president of the French Anti-Slavery Society. This society was founded in 1865. In essence, it called upon all nations to abolish slavery. Additionally, the members also raised money that was then given to newly freed slaves in the United States.

Invisible to tourists, the Statue of Liberty's 25-foot-long (7.6-meter-long) left foot, pictured in 1984, brushes against a little-known detail that nevertheless loomed large in sculptor Frederic Bartholdi's design. Broken chains beneath the statue's toga symbolize freedom from oppression in general and the United States' abolition of slavery—just 20 years prior to the statue's dedication—in particular. (Historic American Engineering Record, Library of Congress) With the abolition of slavery and the Union's victory in the Civil War in 1865, Laboulaye's wishes of freedom and democracy were turning into a reality in the United States. In order to honor these achievements, Laboulaye proposed that a gift be built for the United States on behalf of France. Laboulaye hoped that by calling attention to the recent achievements of the United States, the French people would be inspired to call for their own democracy in the face of a repressive monarchy.

When Laboulaye's Statue of "Liberty Enlightening the World" was completed, it not only represented democracy but also symbolized American independence and the end of all types of servitude and oppression. A broken shackle and chain lie at the Statue's right foot. The chain disappears beneath the draperies, only to reappear in front of her left foot, its end link broken. However, although the broken shackle is a powerful image, the meaning behind it was not yet a reality for African Americans in 1886; it would not be for at least another 100 years. This image from Puck Magazine, September 9, 1908, utilizes the likeness of the Statue of Liberty to convey the horrors African Americans experienced after the Civil War.

As W.E.B. Du Bois wrote in his autobiography, The Autobiography of W.E.B. Du Bois: A Soliloquy on Viewing My Life From the Last Decade of Its First Century, he was unable to imagine the same sense of hope he assumed some immigrant arrivals had felt when he sailed past the Statue on a return trip from Europe. This hope did not pertain to his race. The fight for equality, liberty, and justice for all at this point in time had not been achieved, but rather disregarded after the Statue's completion and dedication. Therefore, African Americans rarely used the Statue as a relevant symbol for their struggle - they were reluctant to embrace the symbol of a nation which would not fully include them as citizens. The Statue of Liberty did not help them to gain equality and justice in the truest sense - it was only the beginning. (source: National Park Service)