Included in an award-winning exhibit at the Paris Exposition, this photograph--one of 500--was part of the evidence collected under the direction of W. E. B. DuBois to illustrate the condition, education, and literature of African Americans at the turn of the twentieth century, only thirty-five years after the abolition of slavery. In his own description of the exhibit, DuBois noted that by 1900 African Americans owned one million acres of land and paid taxes on twelve million dollars worth of property. In addition to photographs about black-owned businesses like this one in Georgia, the exhibit included a number of images related to successful black businesses elsewhere. The related display in the foyer of the Library's John Adams Building features additional photographs of black businesses assembled for the Paris Exposition. [http://memory.loc.gov/ammem/aaohtml/aopart6.html] An African American-owned drugstore in Georgia--CREDIT: "Interior view of Dr. McDougald's Drug Store." 1899 or 1900. W.E.B. Du Bois Albums of Photographs of African Americans in Georgia Exhibited at the Paris Exposition Universelle in 1900, Prints and Photographs Division, Library of Congress


At the turn of the century, W. E. B. Du Bois compiled a series of photographs for the "American Negro" exhibit at the 1900 Paris Exposition. He organized the 363 images into albums, entitled Types of American Negroes, Georgia, U.S.A. and Negro Life in Georgia, U.S.A.. 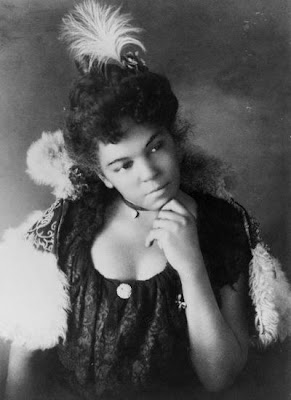 At the time, Du Bois was a professor of sociology at Atlanta University, committed to combating racism with empirical evidence of the economic, social, and cultural conditions of African Americans. He believed that a clear revelation of the facts of African American life and culture would challenge the claims of biological race scientists influential at the time, which proposed that African Americans were inherently inferior to Anglo-Americans. The photographs of affluent young African American men and women challenged the scientific "evidence" and popular racist caricatures of the day that ridiculed and sought to diminish African American social and economic success. Further, the wide range of hair styles and skin tones represented in the photographs demonstrated that the so-called "Negro type" was in fact a diverse group of distinct individuals. The one public statement Du Bois made concerning these photographs was that visitors to the American Negro exhibit would find "several volumes of photographs of typical Negro faces, which hardly square with conventional American ideas."

Du Bois's work for the American Negro exhibit was extensive and much praised. In the Spring of 1900, Paris Exposition judges awarded him a gold medal for his role as "collaborator" and "compiler" of materials for the exhibit. [http://www.loc.gov/pictures/collection/anedub/dubois.html]

NPR reported on 2 December 2003, "W.E.B. Du Bois' African-American Portraits: Collection Depicts Life for Blacks 35 Years After Civil War," by Michele Norris -- "Some foreigners will think we have nothing for the Negro but the bludgeon and revolver; we shall convince them otherwise." These are the words of B.D. Woodward, the assistant commissioner-general for the U.S.'s delegation to the 1900 Paris Exposition. He was referring to the "American Negro Exhibit," pulled together for the Paris Exposition by the young sociologist W.E.B. Du Bois. Du Bois put on exhibit 500 photographs that symbolized black life in America 35 years after the end of slavery. And he chose with care. The photos, many of them portraits, show the trappings of middle- and upper-class life: ornate clothing, fancy hats, jewelry, confident poses. Du Bois intended the photographs to counteract stereotypes of blacks as poor, uneducated, or the victims of American racism. Those photographs are now collected in a book, A Small Nation of People, published by the Library of Congress. Co-author and historian of photography Deborah Willis first heard about the photos during college. She didn't discover they still existed for years later. She says even today — in her 50s — she's still amazed by the stories the photos tell. NPR's Michele Norris, host of All Things Considered, talks with Willis about the collection. (source: NPR)