Few people living today in Rhode Island realize that the slave trade was once a vital component of the Ocean State's economy.

"The numbers are astonishing," says Ray Rickman, project director of an exhibit detailing the slave trade in Rhode Island which will be on display at the Jamestown Philomenian Library for the next three days, starting with an opening reception tonight.

"In an 80-year period, people in Rhode Island got rich" from the slave trade.

Jamestown was home to the last known slave in Rhode Island. "No one would ever think that," Rickman adds.

The following death notice was published in the Providence Daily Tribune on Jan. 10, 1859: "James Howland, the last of the Rhode Island slaves, died at the residence of John Howland, Jamestown, R.I., on the 3d inst., at the ripe old age of one hundred years. He had always been a faithful servant in the Howland family. Up to the time of his death he retained all his faculties unimpaired, and on the night of Jan. 2 attended to his usual duties about the house. On the morning of the 3d he rose, dressed himself, and was about to ascend the stairs from his chamber, when he fainted, and expired in a few moments."

Slavery was everywhere in Rhode Island, Rickman says. Slaves worked on South County farms and in the mansions in Newport. But it was the slave trade that was the "number one financial activity" for Rhode Island from 1720 to 1807.

The slave trade started here with the spirits: Rhode Islanders would manufacture rum, which they would ship to Africa and sell or trade for slaves. "Rhode Islanders were really good at making rum," he says.

Then the Rhode Islanders would transport the slaves in the Caribbean and the southern colonies, which later became states, where the slaves would be sold or traded for sugar cane. "They would fill the boat with sugar" that was brought home to the Ocean State to make the rum, Rickman says.

It was a trading triangle, he says. Slaves were packed below decks on the ships and many became sick and died. Their treatment was brutal and inhuman.

Many Rhode Island residents were involved in the slave trade. There were "16 or 17 rum factories" in the state. "Newport had six," Rickman said.

Wooden barrels to transport the rum were manufactured in northern Rhode Island. Trees were also felled in the northern areas of the state for the slave ships, many which "were built everywhere - Newport, Bristol, Providence," Rickman says.

Bakers in South County would make the bread used to feed the Africans who were being transported in the ship's hold from western Africa. 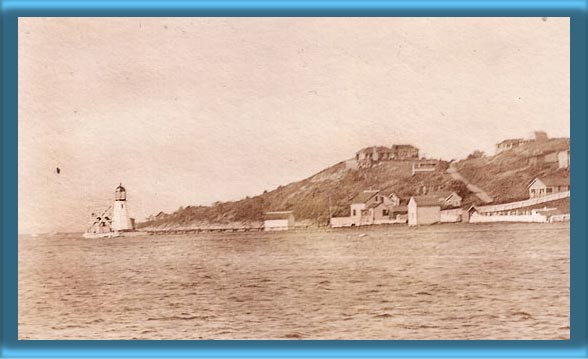 Rhode Islanders manufactured 50 percent of the clothing worn by slaves in the South up until the Civil War, he adds. "That's 10 million people" they provided clothing for.

"In Narragansett County, conditions favored large-scale farming, and here more than anywhere else in the North a system began to emerge that looked like the Southern plantation colonies. In parts of 'South Country' (as Narragansett also was called), one-third of the population was black work force by the mid-18th century. That's comparable to the proportion of slaves in the Old South states in 1820. Narragansett planters used their slaves both as laborers and domestic servants. William Robinson owned an estate that was more than four miles long and two miles wide, and he kept about 40 slaves there. Robert Hazard of South Kingstown owned 12,000 acres and had 24 slave women just to work in his dairy. The Stantons of Narragansett, who were among the province's leading landowners, had at least 40 slaves.

"In keeping with the usual pattern, a higher percentage of blacks meant a more strict control mechanism. South Kingstown had perhaps the harshest local slave control laws in New England. After 1718, for instance, if any black slave was caught in the cottage of a free black person, both were whipped. After 1750, anyone who sold so much as a cup of hard cider to a black slave faced a crushing fine of £30," historian Douglass Harper writes.

The exhibit, "Hidden from History: Slavery in Rhode Island from its Inception to Its End," provides a rare and often overlooked perspective "into the politics and pervasiveness" of slavery.

The exhibit includes many rare artifacts and documents. It will open tonight - Thursday, March 19 - at the Jamestown library with a reception and a talk at 7 p.m.

Richard Ring and Robb Dimmick also helped put together the slavery exhibit and will talk at tonight's reception, Rickman says.

"We are trying to capture this information before it gets lost," Rickman says. "The folks in the Jamestown Town Clerk's Offices were surprised that they have that document" concerning Rhode Island's oldest slave.

"This exhibit makes us realize what we don't know" about the slave trade in our home state, he adds.  (source: Jamestown Press)

Jamestown's Registry of Births and Deaths 1850 to 1916 where the death of James Howland, Rhode Island's last slave, was recorded. Howland died Jan. 3, 1859. He was 100 years old, born in Jamestown, birth date unknown. The registry listed Howland as "a Slave Freed by the Act of 1792." His father's name was Great Petre; his mother was called Sylvia. The cause of death was "infirmities of age." Photo by Jeff McDonoug (source: Jamestown Press)