From UT San Diego, "Jim Crow era recalled in rail car project: Passenger car gives glimpse of country’s segregated past," by Karen Pearlman, on 8 February 2012 -- Thousands of miles were put on the Rockdale, Sandow & Southern #3 wooden railroad car, and with that, thousands of stories were no doubt told by the people who were part of its work in rural Texas.

Since then, a group of dedicated volunteers, led by Ted Kornweibel Jr., a professor emeritus in African American history at San Diego State University, worked countless hours to restore, rebuild and replace parts — and recapture part of the past through this rail car, which was built in 1886 in Pennsylvania.

In time for Black History Month, the museum will display this special car and a photographic exhibit free to the public. An inaugural ceremony is set for 1 p.m. Feb. 25 inside the museum’s display building at 750 Depot St., Campo.

This car may already be familiar to some.

For years its home was 20th Century Fox in Los Angeles, and the car had parts in several Hollywood movies, including the Otto Preminger-directed “Centennial Summer,” “The True Story of Jesse James” starring Robert Wagner, and Elvis Presley’s “Love Me Tender.”

But for Kornweibel, who taught at SDSU from 1977 through 2005 and has been a volunteer at the museum for more than 30 years, those stars have nothing on this rail car.

The San Carlos resident has a deep love in all aspects of this subject and is the author of “Railroads In The African-American Experience: A Photographic Journey.”

The book offers a detailed look (more than 500 pages, including 200 photos) at the history of the railroad business and the way it affected black Americans, many of whom created the tracks and many others of whom worked on board the trains. 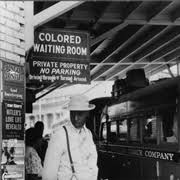 This particular car made only 7-mile journeys, but it had all the hallmarks of trains that went longer distances, including partitions. The car has a section with eight seats for black passengers and a section with 22 seats for white passengers.

The bathroom and water fountain are both located in the white area, meaning that nonwhites had to go without either on their journey. On trains such as this, the dining area was also off limits to black passengers.

“Separate is not equal,” Kornweibel said, then adds, “I am just stoked anytime someone recognizes the issue of segregation. It’s now a fading memory, thankfully. Many black people have seen the car and said, ‘I didn’t experience that,’ but the oldsters... the stories that they can easily tell... ‘I remember visiting Grandma, we had to bring own food with us, sandwiches wrapped in string because they wouldn’t let us eat in the dining car.’ It breaks my heart to hear that but that’s how it was.”

Only a handful of museums display a restored segregated car, none west of the Mississippi, according to Kornweibel. No other museum has a fully restored car of this kind as well as the accompanying exhibit, which depicts a 180-year scope of black railroading. 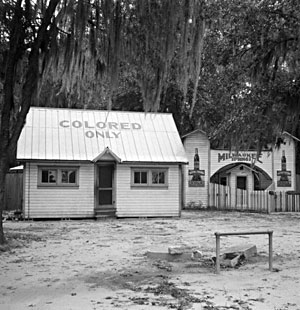 The car has an open platform with hundreds of beautiful aquamarine squall glass panes that have a rosette design. Red plush upholstered walkover seats in the passenger area look inviting and comfortable.

Larry Rose, the museum’s facilities director, said it’s difficult for him to pick out his favorite part of the Jim Crow car — much less his favorite of the 80 cars and 20 locomotives on site — but he said he is proud of all the work that the volunteers do, even if few of the cars actually do any physical moving.

He also said he fears that the youth of today are losing interest in trains and has noticed fewer young visitors to the museum annually. He and volunteer Frank Stites say they hope that this exhibit will attract people of all ages.

Rose and Stites carpool to Campo from La Mesa and San Carlos almost daily to work on trains. Stites is a retired professor of American history who sees the big picture of how the trains are a part of every American’s past.

“A group of black storytellers came out here a couple of years ago,” Stites recalled. “I took them through the (Jim Crow) car and they told me how the car makes it real for them, how it’s much better than a picture, and tells more than 1,000 words. They know this is the real McCoy. We’re making it real. This is a great opportunity to illustrate the past and teach the present.” [source: http://www.utsandiego.com/news/2012/feb/08/jim-crow-era-recalled-in-rail-car-project/]

The Pacific Southwest Railway Museum in San Diego is restoring a vintage railroad car to its condition during a controversial period of American History. Built in 1886 in Pennsylvania the car was sold and used on the Rockdale, Sandow and Southern railroad as a "Jim Crow" car, segregating black from white passengers from 1936 to 1945 when it was sold to 20th Century-Fox. It was used in films that included "Love Me Tender" with Elvis Presley, ' Centenial Summer," "The True Story of Jesse James" and "Raid." The museum obtained the cars in 1976 and restoration started in 1999.