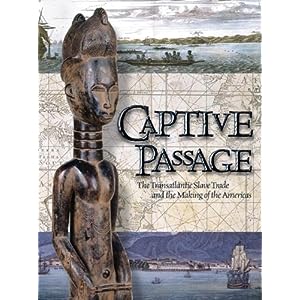 Captive Passage: The Transatlantic Slave Trade and the Making of the Americas.

Between 1441 and 1888, Europeans and their descendants in the Americas enslaved many millions of Africans. Torn from their homeland, men, women, and children were shipped to the Americas and forced into slavery.

The transatlantic slave trade was a highly profitable maritime business. Without African slaves, the potential economic value of the Americas could never have been realized. Slaves made possible the taming of the wilderness, construction of cities, excavation of mines, and the establishment of powerful plantation economies.

This exhibition examines the transatlantic slave trade and seeks to increase understanding of this maritime epic and its legacies in the modern world.

The transatlantic slave trade was the second leg of a triangular economic route between Europe, Africa, and the Americas. Traders left European ports headed for Africa's west coast. There they exchanged trade goods for humans and loaded their human cargo into ships. The transatlantic voyage itself-the infamous "Middle Passage" -usually took six to eight weeks.

Once in the Americas, sailors off-loaded those Africans who had survived the journey and sold them in the markets in the Americas where the captives began their life of labor as slaves. The ships then returned to Europe with goods produced by the subsequent slave labor. With this triangular trade, European capital, African labor, and American land and resources combined to supply an emerging global economy.

Historians do not agree on the exact number of Africans who were forcibly transported across the Atlantic, although it is generally accepted that the number exceeds ten million.

Slave traders actively encouraged wars in Africa, resulting in the death or enslavement of millions more Africans on that continent than ended up in the Americas. Scholars of African history believe the total number of Africans killed or abducted in Africa and the Americas could be between 50 and 100 million. Whatever the figure, the slave trade brought death and dislocation on an unimaginable scale. Its full impact will never be fully known. (source: Mariner's  Museum)
Posted by Ron at 5:16 AM