The Brown Brothers, the Slave Trade SONS OF PROVIDENCE: The Brown Brothers, the Slave Trade, and the American Revolution, by Charles Rappleye


From the Washington Post, "How a family in the New England slave trade came to grips with the moral issues.," by Jonathan Yardley on 11 June 2006 -- In the winter of 1770, the Brown brothers of Providence won a spirited contest among various Rhode Island interests for the honor of establishing the colony's first college. They chose to locate it on Prospect Hill, "with the town of Providence laid out below, and all the broad reach of Narragansett Bay in view to the south." It was called Rhode Island College, and it held its classes in "the largest building in Rhode Island, with dimensions of 150 by 46 feet, five stories high, and all enclosed in brick" -- a considerable feat of construction when one considers that most of Providence at the time consisted of modest single-family wooden houses.

That great building was then called the College Edifice. Now it is University Hall, the principal administrative center of Brown University, the name given to Rhode Island College in 1804 in recognition of the Brown family's support and generosity. It is, of course, a very different institution now, but its indebtedness to the Browns remains great. So, too, does the ambiguity of the Browns' legacy because some of their fortune's roots are less than honorable.


Like many other wealthy New Englanders of their time, the Browns were in the slave trade. That this trade flourished in New England is perhaps the dirtiest secret of a region that has spent much of the past two centuries lecturing the rest of the country about slavery, racial discrimination and other practices of which New England feigns innocence. The Browns were not in the trade as heavily as many of the great families of Newport, 30 miles to the south on Narragansett Bay. But not merely did they deal in slaves, they owned them; their treatment of their human chattel may have been somewhat more humane than that of plantation owners in the South, but their servants were slaves all the same. Though Moses Brown, an enthusiastic convert to Quakerism, freed his own slaves in 1773, his brother John never got over his belief "that the true course to wealth lay through Africa." He "willingly assumed the mantle of spokesman for slaving interests" as abolitionist sentiment began to rise in Rhode Island.

All of this is reported by Charles Rappleye, a freelance journalist and editor whose previous book (written with Ed Becker, a private detective) was All-American Mafioso: The Johnny Rosselli Story . The leap from the Mafia to colonial New England is a long one, but Rappleye makes it with style. He is a diligent researcher (who has difficulty letting go of what he finds, hence this book's excessive length) and a fair-minded, unjudgmental chronicler of the Browns' complicated story. Unsurprisingly, his sympathies gravitate toward Moses, the brother whose conscience and moral acuity eventually made him one of New England's most ardent and effective opponents of slavery. He also gives full due to John, the rougher and more driven of the two men but, in some ways, the more interesting. 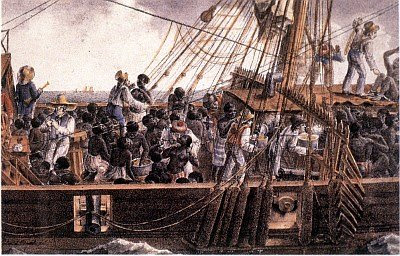 John was born in 1736, Moses two years later. Their father, James, was well established in Providence; indeed, by the time the boys were born, the Browns were the leading family of Providence, chiefly because of their various nautical activities. After James's death in 1751, the boys were raised by their uncle Obadiah. "Records show that between 1748 and 1760, Obadiah and his nephews owned outright or jointly more than sixty vessels. . . . While the slave trade was never its primary concern, the family firm maintained an active interest in that line of business," and the boys came to maturity taking it for granted. In the mid-1760s, when John, Moses and their brother Joseph invested in a slave ship sailing out of Newport called Sally, "each signed on to this venture individually, and as equal partners." There was nothing unusual about this. What was unusual was that less than a decade later, Moses had a revelation: "I saw my slaves with my spiritual eyes plainly as I see you now, and it was given to me as clearly to understand that the sacrifice that was called for of my hand was to give them their liberty." He offered his slaves generous terms of release, including use of his own land. Rappleye writes:

"As obvious a moral affront as slavery appears today, there was no consensus on the evils inherent to slavery at the time Moses freed his slaves in 1773. Opposition to slavery was, in fact, espoused by a tiny minority, controversial even among the Quakers, and considered heretical by theologians and political thinkers on both sides of the Atlantic. In the West Indies in particular, but also in North and South America, slavery was the engine that drove the mercantile empires of Europe. The institution was as old as time -- finding explicit sanction in the Bible, and in the glory days of Greece and Rome -- and had flourished, in its modern form, for two hundred years. It appeared, in the eighteenth century, as universal and immutable as human nature."


Moses' change of heart, though, was complete. He believed that "given the opportunity, blacks could assimilate into white society," and, "unlike many fellow abolitionists, Moses saw blacks not just as pitiable objects for philanthropy but as equal to whites in every human capacity." He was, for his day and time, a genuine radical, and his views greatly complicated his relationship with his brother John, who had "built his fortune as a smuggler and a privateer" and, during the war with England, "managed to turn the war into a personal bonanza," through profiteering that made him "the richest man in Rhode Island."

John was an odd duck: pugnacious, overbearing, impulsive, greedy, yet "within the circle of his family . . . caring and compassionate, a father who doted over his children and shared their smallest concerns." He "was possessed of a vision acutely tuned to his times and the direction that America was headed. The sheer range of his enterprises, from farming and manufacturing to shipping and finance, was extraordinary. And while he was a man of property, he was never obsessed with his possessions. . . . For John, the pleasure was not in the spoils but in the hunt, and in the stature that came with material wealth."

After Moses' revelation about slavery, the brothers' relationship became testy and underwent sharp swings. The men liked and admired each other, different though they were, but slavery put them on opposite sides of the greatest moral issue ever faced by the country in whose founding they played a part. Once they took opposing stands in public, Moses "knew now -- if he had any doubts before -- that his nemesis was his brother." John "embraced the role of ever-ready alter ego, dogging Moses, even ridiculing him in his quest for spiritual atonement." Still, "Moses never broke with John, never even rebuked him for his public attacks on his character. It was as if John had become the first object in Moses' mission of spiritual atonement: if he could not bring his own brother to share his sense of moral obligation, how could he expect to reform an entire nation?"

That, as we know all too well nearly two and a half centuries later, is a task far too large for any individual, even one as great as Abraham Lincoln or Martin Luther King Jr. The sorrow that seems to have descended on Moses in his later years was unwarranted; he had done his best. But as Rappleye understands, the struggle of brother against brother is deep in the American grain. To call the conflict between the Brown brothers America in microcosm would be far too glib, and to his credit Rappleye resists the temptation, but it is a struggle with which countless Americans have been intimately familiar over the generations, and one that led to the most terrible war in the country's history. So Sons of Providence is more than the story of two privileged and disputatious men, and it should be read with an eye to its larger implications. · [source: Washington Post]

Click here to view author Charles Rappleye talk about his book Sons of Providence: The Brown Brothers, the Slave Trade, and the American Revolution, published by Simon and Schuster, on C-Span. In his book he investigated the history of the Brown brothers,
Posted by Ron at 1:59 AM