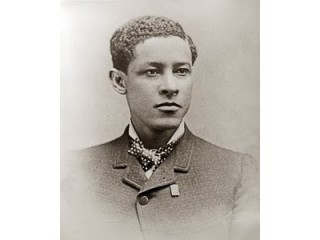 As an apprentice in a shoe factory where he operated a sole-sewing machine, Jan Ernst Matzeliger was responsible for attaching different parts of a shoe together. At the time, no machines existed that could attach the upper part of a shoe to the sole, therefore it had to be done by hand. “Hand Lasters” were able to produce approximately 50 pairs of shoes a day. In 1882, Matzeliger perfected a shoe lasting machine that was able to complete 150 to 700 pairs of shoes a day. By 1889 the demand of the shoe lasting machine was overwhelming and The Consolidated Lasting Machine Co. was formed, where Matzelinger was given huge blocks of stock for his invention. His machine had revolutionized the entire shoe industry in the U.S. and around the world.

United Shoe Machinery Company of Boston. In a biographical sketch of its president, Mr. Sidney W. Winslow, a multimillionaire,[19] it is related that he claims to have laid the foundation of his immense fortune in the purchase of a patent for an invention by a Dutch Guiana Negro named Jan E. Matzeliger. This inventor was born in Dutch Guiana, September, 1852. His parents were a native Negro woman and her husband, a Dutch engineer, who had been sent there from Holland to direct the government construction works at that place. As a very young man Matzeliger came to this country and served an apprenticeship as a cobbler, first in Philadelphia and later in Lynn, Massachusetts. The hardships which he suffered gradually undermined his health and before being able to realize the full value of his invention, he passed away in 1889 in the thirty-seventh year of his age. 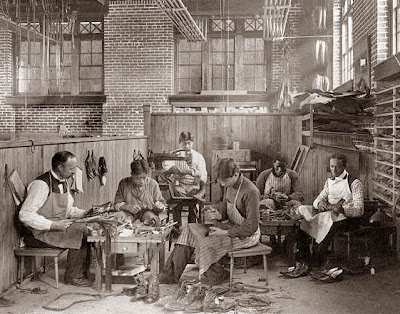 He invented a machine for lasting shoes. This was the first appliance of its kind capable of performing all the steps required to hold a shoe on its last, grip and pull the leather down around the heel, guide and drive the nails into place and then discharge the completed shoe from the machine. This patent when bought by Mr. Winslow was made to form the nucleus of the great United Shoe Machinery Company, which now operates on a capital stock of[Pg 29] more than twenty million dollars, gives regular employment to over 5,000 operatives, occupies with its factories more than 20 acres of ground, and represents the consolidation of over 40 subsidiary companies. The establishment and maintenance of this gigantic business enterprise forms one of the biggest items in the history of our country's industrial development. Within the first twenty years following the formation of The United Shoe Machinery Company, in 1890, the product of American shoe manufacturers increased from $220,000,000 to $442,631,000, and during the same period the export of American shoes increased from $1,000,000 to $11,000,000, the increase being traceable solely to the superiority of the shoes produced by the new American machines, founded on the Matzeliger type. The cost of shoes was reduced more than 50 per cent. by these machines and the quality improved correspondingly. The wages of workers greatly increased, the hours of labor diminished, and the factory conditions surrounding the laborers immensely improved. The improvement thus brought about in the quality and price of American shoes has made the Americans the best shod people in the world.[20]

That invention will serve as Matzeliger's towering monument far beyond our vision of years. Throughout all shoe-making districts of New England and elsewhere the Matzeliger type of machine is well known, and to this day it is frequently referred to in trade circles as the "Nigger machine," the relic, perhaps, of a possible contemptuous reference to his racial identity; and yet there were some newspaper accounts of his life in which it was denied that he had Negro blood in him. A certified copy of the death certificate of Matzeliger, which was furnished the writer by William J. Connery, Mayor of Lynn, on Oct. 23, 1912, states that Matzeliger was a mulatto. (source: The Journal of Negro History, 1917)