The long history of Zanzibar has its darker side. During the 18th and 19th centuries it was the main base for the trade in African slaves brought from the interior by Arab traders, who often purchased their captives from warring tribes. The slaves were sold to European and American merchants, and shipped in appalling conditions to the Americas and the Caribbean. It is still possible to visit the old slave pens, but an Anglican cathedral has been built on the site of the slave market.

The altar is on the very spot where the whipping post once stood, and the cross beside it is made from the tree under which Livingstone died. During his time as a missionary Livingstone became a tireless crusader for the abolition of slavery, but the trade continued illegally for some years after it was banned. The heart of Zanzibar town, built of stone, is a tangle of narrow winding streets that seem to lead everywhere and nowhere. Look out for the ornate, carved wooden doors, many of which date from the time of the sultans. They were designed both to display and protect the wealth of the house-owners.

From the UK Guardian:  In Zanzibar, Tanzania, there is another striking interplay between material structures and the realm of ideas.

The Stone Town was host to one of the world's last open slave markets, presided over by Arab traders until it was shut down by the British in 1873. The slaves were shipped here in dhows from the mainland, crammed so tightly that many fell ill and died or were thrown overboard.

Below St Monica's guesthouse, dozens of slaves, and women and children, were imprisoned for days in crowded cellars with little air and no food or toilets. Even after two minutes down there, under the low roof, the atmosphere seemed poisonously oppressive.

The guide said the slaves were led outside and lined up in order of size. They were tied to a tree and whipped with a stinging branch to test their mettle. Those who did not cry or faint fetched a higher price at market. Africa has its share of cruelty and suffering, but such stories bite our conscience as if for the first time.

What now stands on the site? The Anglican Cathedral Church of Christ. The former whipping tree is marked at the altar by a white marble circle surrounded by red to symbolise the blood of the slaves.

Legend has it that former slaves in need of work were employed in the cathedral's construction, and made one mistake. The supervisor, Bishop Edward Steere, was called away on business and returned to find 12 pillars had been erected upside down. He decided to leave them, and so they remain.

Steere, a popular figure who in 1885 wrote A Handbook of the Swahili Language: As Spoken at Zanzibar, eventually died of a heart attack in a nearby building. He is buried behind the altar.

There is also a tribute to Dr David Livingstone, who stayed in Zanzibar before his final expedition. Some wood from the tree in Zambia under which his heart was buried has been fashioned into a cross that hangs in the cathedral. Again, history has imbued a place – a tree – with quasi-religious significance. 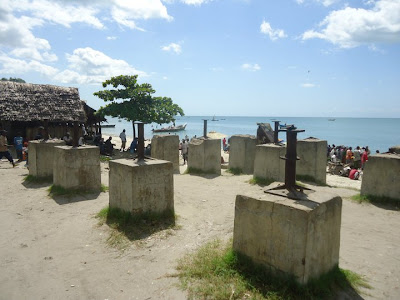 Outside, sunken in the ground, is an artwork: lifesize statues of slaves that could have been made by Antony Gormley, bearing original chains.

The Stone Town is a labyrinth of alleyways, spice markets and unruly traffic, all sufficiently exotic for a chase sequence in a Bond or Bourne movie. There is a mix of Arab, Indian and African influences, notably elaborately carved wooden doors with brass studs, a style that originated as a defence against charging elephants. No one could accuse this place of being soulless. (source: UK Gaurdian )

This sculpture was next to the Cathedral - and a building used to imprison slaves prior to shipping them out. Zanzibar had a 'thriving' slave trade.