The Story of The Legendary Icon Anastacia: Escrava Anastacia 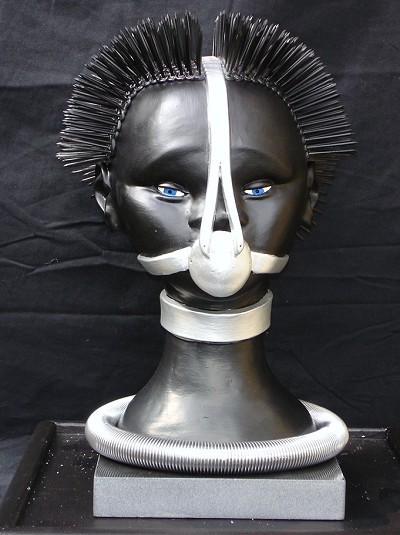 Editor's note:  This story comes from the website, Artworks By Matt Branson. Finding Anastacia's story in English has been a challenge, but this author seems to be from the UK and has the essence of the story correct (my Portuguese is sketchy at best, but from what I've been able to translate his version of the story rings true).  I've seen this iconic image of the cruelties of slavery, but I haven't, until this day, been able to locate the backstory of the masked woman.

From my understanding and research, it appears that the Portuguese/Brazilian slave holders possessed this strange propensity to mask their enslaved population.  One can just imagine the agony of wearing an iron bridle in the subtropic heat, day in and day out.  The utter misery and torment of enslavement coupled with an unbearable  torture devise like the "dirt eating mask" must have yielded untold suffering for those wearing these vile devices.  Add on to that the burdensome iron slave collar with prongs for extra torture, along with enslavement in perpetuity and the hopeless tyranny of enslavement seems too extreme to wrap your mind around.--Ron Edwards, US Slave Blog

So, on with the story from Matt Branson:  "I had lived in Rio De Janero for a few years. One day while out down town, I came across a little head of a black girl wearing an iron mask. I had already collected quite a few strange looking statues and thought she would fit in just fine with the rest of them. She pecked my curiosity and I wanted to know more about her."

The story I discovered concerning this new, small statue, was about a child named Anastacia. A black female slave brought from the west coast of Africa to Brazil. Her mother had been forcibly taken by her white owner for his physical pleasures. A child was conceived, the first black child to be born with blue eyes. The cruelty and guilt of this plantation owner drove him to have the baby sent far away, concealing from his wife his indiscretion as well as his violence.

"A man I had met in Rio first told me the tale of Anastacia and of the church in which her image is honored. The truth is that little remains to prove her existence. Two accounts exist, the one above and the following narrative, both of which explain my interest in this amazing woman. My experiences in life, and particularly in Brazil, leads me to believe she truly was a real person. " -MATTHEW BRANSON The Story of Anastacia - The Slave Girl

Based on oral tradition and translated from a Brazilian website Worshipped in Brazil as a saint and heroine, Anastacia is considered one of the most important woman in black history within the culture of Rio de Janeiro. "Her story still has the power to move us to awe and compassion and for that reason alone, I want to make her real to those that don't know about her."

Anastacia's birth is linked to the tale of Delminda. Some say Delminda was from the Bantu tribe (originating in about 2,000 B.C.E. in southern Nigeria and Cameroon), a daughter of the royal family of Galanga brought to Brazil in 1740 with a cargo of 112 slaves. One version of the story is as follows. Delminda was extremely pretty. She was sold in the harbour by Antonio Rodrigues Velho. She had been raped by a white man and was sold pregnant to Joaquina Pompeu. Delminda gave birth that same year on the 5th March to the blue eyed Anastacia. She was the first black girl with blue eyes in Brazil. It is at this point the two stories seem to merge. Whether or not she was separated from her mother or remained with Delminda, all seem to agree on what comes next. As she grew up Anasatcia became the obsession of the owner's son, Joaquin Antonio.

Very beautiful, It is said that all the white women around were jealous of her, so encouraged Joaquin to make her wear the slave mask. As a punishment for repeatedly refusing his advances, he raped her and condemned her to wear the iron mask for the rest of her life, only removing it once a day to eat. She lived for some years before the toxicity of the metal from the mask became poisonous.

Some accounts claim she was performing miracles toward the end of her life. It became gossip amongst the poor that she could heal because she had found it in her heart to forgive the torture she had suffered, and that she even healed her owner's son of some disease. At that moment she became a saint for many of the poor. 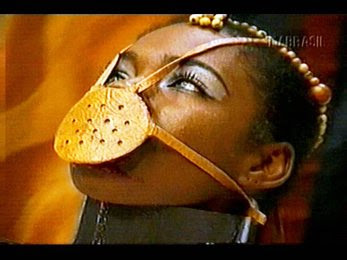 Some continue today petitioning Rome, to have her canonized as St. Anastacia of Rio. There is a statue and a place of worship in Vas Lobo, where pilgrims flock to worship her. She has more than twenty-eight million followers, though I was surprised to find that most of the Brazilian's I have met have never heard of her.

She is exclusive to the poor of Rio and the descendants of slaves. Some link her image with a number of paintings by Etienne Victor Arago (b. 1755 d. 1855), a French watercolourist who traveled in Brazil sometime between 1817-1820. His known works portrayed gold mining slaves who were also forced to wear iron masks, so as not to hide or swallow gold nuggets while they were digging.

She died in Rio after years of agony, her remains were housed in the Church of Rosario, in downtown Rio, but disappeared after a fire. Anastacia became a religious myth, performing miracles, even until today. Many people continue to pray to her when they are sick. Then they are healed.

Her history was miraculously recovered in 1968, when an exhibition to celebrate 90 years of the abolition of slavery was held in the Church of Rosario. In the back of the church was found a portrait of her by Arago. "As you can see, there are a few different accounts of her existence, of Anastacia, the slave girl. She would have been forgotten entirely if it hadn't been for a portrait by Arago.

Mystery is part of her story as it is part of the life of this French painter who sailed the seas between Australia and South America. There are conflicting tales as to whether or not Arago is buried in Paris or in Rio itself. 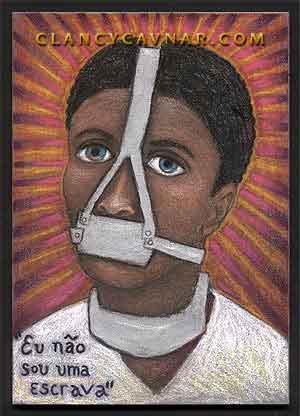 Human Rights are for all of us and slavery is not a condition for humanity. I continuously lived in Brazil from 1985 to 1992. Around 1987, a television news broadcast in Rio said authorities had found a farmer in the middle of nowhere in rural Brazil, who operated his farm with all his workers in chains. He repeatedly advertised jobs through the press in Sao Paulo and when anyone arrived to work, he made a slave of them, one-hundred and ten years after the abolition of slavery. How can we be so unconscious as to not know about these things? How can we be apathetic to the conditions of others? I would like to put Anastacia into the history books, in Brazil and everywhere else. She represents the suffering of people that have been forgotten and are still being ignored today. I hope you see my point of view, and can appreciate my art, for her sake.

It wasn't until years later, that I discovered the meaning of the name Anastacia -- it means "Resurrection". (source: http://www.mattbranson.co.uk/page4.htm)