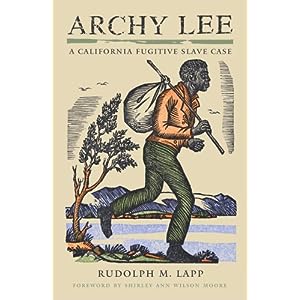 
Most people do not think of Sacramento when discussing the history of slavery, but during the Gold Rush, enslaved human beings worked for their owners here in California. In 1857, Sacramento became the site of a court battle between an escaped slave, Archy Lee, and his former owner. The resulting struggle became an early victory in American civil rights, and a rallying point for Sacramento’s early African American community.

Archy Lee was an African American slave from Mississippi, brought to Sacramento by his owner, Charles Stovall. Stovall came to Sacramento on October 2, 1857, bringing Lee with him. Once in California, Stovall established a school and hired out Archy, keeping a portion of his wages. At the time, slave owners were permitted to keep their slaves only if they were visiting California for short periods. Permanent residents could not own slaves.

During his stay in Sacramento, Lee came into contact with the established African American community in Sacramento, centered around the Hackett House hotel on Third Street. This community was small, but politically very well organized. In a state where most whites were split between those who wanted to exclude African Americans entirely and those who wanted California to become a slave state, their need for organization was obvious. By 1857, they had established two churches (Shiloh Baptist Church and St. Andrew’s African Methodist Episcopal), a school, several local businesses, and hosted statewide “Colored Convention” events to organize the call for civil rights.

In January of 1858, Stovall decided to return Archy Lee to Mississippi. Lee resisted by taking refuge in the Hackett House hotel. Stovall sought assistance from the Sacramento County sheriff and had Lee arrested. The first decision in the Archy Lee case, made by Judge Robert Robinson on January 26, 1858, was that Archy was a free man, because Stovall was a permanent resident of California and thus could not own slaves.

However, Stovall had arranged for a second arrest warrant by appealing to the State Supreme Court, and Lee found himself before another judge, Peter Burnett.

Judge Peter Burnett, formerly California’s first elected governor, was a virulent racist. While a member of the Oregon legislature, he authored a bill banning African Americans from the state, punishing those who chose to remain with flogging every six months. While governor of California, he attempted to pass a bill banning them from California entirely, whether slave or free. On February 11, 1858, Judge Burnett handed down a very unusual decision. While California law prohibited slave ownership for state residents, Burnett decided that Stovall’s inexperience and poor health was sufficient reason to grant what he viewed as leniency in the case. Thus, Lee was Stovall’s property and had to leave California with him.

Most Californians, especially in the African American community, were outraged by the absurdity of this decision, and even Stovall realized that he had to leave California quickly. On March 5, Stovall tried to sneak Lee out of California on the ship Orizaba, but was stopped by representatives of the Colored Convention. This time, both Lee and Stovall were taken into custody; Lee for “safe-keeping,” and Stovall for holding a slave illegally.

By March, the case had come to the attention of both the African American community and white abolitionists throughout California. Both solicited funds for Lee’s defense, and organized a legal team led by Edwin T. Baker to argue on Lee’s behalf. Baker claimed that the previous decision, based on Stovall’s ignorance of California law, was insufficient grounds to set aside the Constitution. Judge Thomas W. Freelon of the San Francisco district court agreed, and overturned Burnett’s decision.

As a final strategy, Stovall’s team appealed to United States Commissioner William Penn Johnston, a Southerner, arguing that Lee was in violation of the 1850 National Fugitive Slave Law. They hoped that Johnston’s status as a federal official would trump California state law. Baker argued that since Lee attempted to escape Stovall’s bondage while in California, no state lines were crossed and thus no federal case could be established. Johnston agreed, and on April 14, 1858, Archy Lee was declared a free man.

After his release, Lee joined an expedition of African Americans resettling in Victoria, British Columbia. While living in Victoria, he worked as a drayman, owned property, and even applied for Canadian citizenship, but later returned to the United States. Little is known of Lee’s later life. The Pacific Appeal newspaper reported in 1862 that he was working as a barber in Washoe, Nevada. In 1873, several newspapers in San Francisco and Sacramento reported that Lee was found ill near the bank of the American River, and was taken to the county hospital, where he died.

In addition to the basic desire to escape slavery, other factors may have motivated Archy Lee’s attempts to avoid a return to the South. Prior to leaving Mississippi, Lee had wounded a white man in a fight. While in California he was safe from retribution, but a return to Mississippi would certainly have meant imprisonment or lynching.

Archy Lee’s struggle for freedom energized California’s African American community and California abolitionists. The resolution of this legal battle was a victory for foes of slavery, African Americans in California, and certainly for Archy Lee. It also made Sacramento the site of an extraordinary early battle in the struggle for civil rights.  (soource: http://www.midtownmonthly.net/life/slavery-in-sacramento/)
Posted by Ron at 1:53 PM