After the convict's death, improvements were made to the Sunbeam sweat box. Black convicts replaced the white prisoners at Sunbeam road camp.


On Oct. 15, 1932, after the 12-man jury deliberated two hours, they brought in a verdict of manslaughter against Courson, but acquittal for Higginbotham. Mrs. Courson began weeping while Mrs. Maillefert remained dry eyed and stared at the floor. Avriett said that he would immediately seek a new trial.

The Maillefert case became the basis for a motion picture. After the convict's death, improvements were made to the Sunbeam sweat box. Black convicts replaced the white prisoners at Sunbeam road camp.

Exterior of the Sunbeam Prison Camp

Original caption:Jacksonville, Florida: "Box-Ext." "Sweat Box" In Which prisoner died. An exterior view of the Sunbeam Prison Camp "Sweat Box" in which the lifeless form of Arthur Maillefert, 19, of Westfield, new Jersey, was found recently, his neck in an iron chain and his feet in stocks. The man on the right is Capt. George Courson, of the Camp, who with Solomon Higginbotham, a guard, is indicted for first degree murder in connection with the death. at the left is Country Detective Gasque.

The convicts work along the road in summer heat, distinguished only by uniforms they wear.

Forgive me, but they are not busting their hump.

You wonder if they know about Jersey Maillefert.

Maillefert changed their lifestyle 66 years ago, when he died the most infamous death in the Florida prison system.

Guards said it was suicide.

He was from Westfield, N.J., which is why he was called Jersey.

Prison Capt. G.W. Courson said he was a handful from the get-go.

Last time was just before he was put in the sweatbox, his feet nailed under wooden staves so he wouldn't run again.

''I talked to him,'' Courson said. ''Reasoned with him. Had ministers talk to him. But it did no good.''

One minister said Maillefert told him he'd do nine years in hell, sooner'n he do it in Sunbeam labor camp.

Seventy-four convicts at the camp went on strike.

He was wearing only a barrel, which he had chewed through once to escape - that's why his feet were nailed down. His body was covered with bruises.

Courson said Maillefert bruised himself beating against the barrel.

Courson and other guards said they had bent over backward to set the boy straight. Never seen anything like Jersey in 12 years of handling prisoners, Courson said.

Gasque told the Jacksonville Journal that Courson had just about convinced him.

Then one of the guards bellied up and grimly told the big city gumshoe:

''Captain sure did treat that man nice.''

The guard kicked Gasque inthe shin to make his point.

''We sure did treat that man nice,'' he repeated.

(The penal system employed no rocket scientists at the time.)

They turned up the heat at a bond hearing before Circuit Judge George Couper Gibbs.

Gibbs personally visited the labor camp, where prisoners were building the Bayard cutoff on the road to St. Augustine.

Gibbs, and the newspapers, examined the sweatbox, the chain, the wooden stocks, the barrel Maillefert had chewed through to escape.


Gibbs had 15 prisoners testify to beatings and maltreatment. He had them removed from the camp for their safety.

He heard from a doctor who said Maillefert had been without food 12 hours before death. The chained prisoner likely buckled from exhaustion and strangled, the doctor said.

Through July, August and September the sordid story of Sunbeam labor camp spread across the finger-pointing nation. Hollywood made a movie.

The state closed the labor camp. The prisoners were dispersed. Free labor finished the Bayard road.

Courson was convicted of manslaughter, punishable by 1 to 20 years in prison. Higginbotham was acquitted.

The work camp system as Florida had known it, from the phosphate mines and turpentine camps and roadsides of the state, was done.

You wonder what the men in the muted uniforms by the side of the road in the slow-motion heat of the present July would be doing if not for Jersey Maillefert.

Or George Couper Gibbs or W.B. Cahoon or Buddy Gasque.

Or maybe even Dimwit the shin-kicker. (source:  The Times-Union) 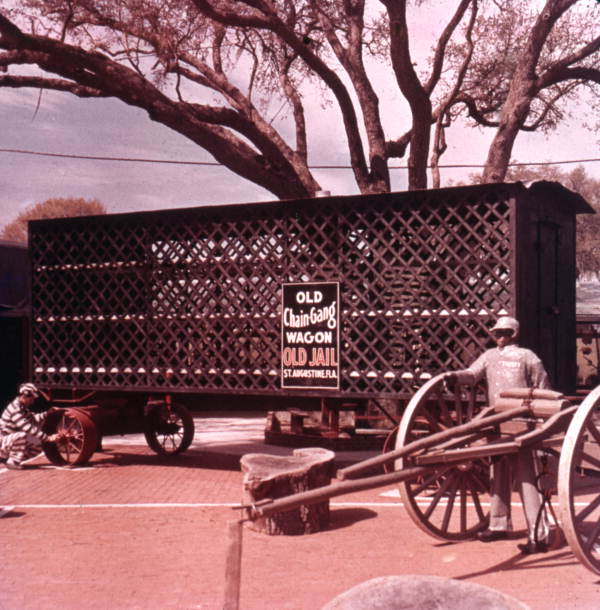 This story by Marlene Womack was printed in the Panama City News Herald on July 1, 2001. It details the events surrounding Maillefert's death.

Sunbeam Camp was Said to be 'Hell Hole on Earth'

In 1930, Florida listed Sunbeam (Prison Camp) as one of its many camps where convicts were housed to work on roads. The place, still on maps of North Florida, was located approximately 12 miles southeast of Jacksonville along U.S. 1 and the Florida East Coast Railway.

Like most other convict camps, Sunbeam was not a popular place. The camp consisted of a stockade, several other buildings and a pen that held two bloodhounds. Some referred to it as "a hell hole on Earth."

On June 3, 1932, the camp became the site of Florida's infamous "chain gang hanging" when Arthur Maillefert, an unclothed prisoner, was found dangling from a chain after enduring some of the most brutal torture ever administered by representatives of the state.

The case drew nationwide attention through newspaper and magazine articles. The young prisoner's death exposed the hellish convict system in Florida that brought out the worse (sic) in people.