Northern Lynchings: Presence of the Past in Duluth, Minnisota 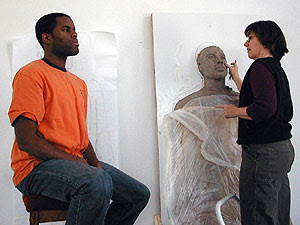 On June 15, 1920, following the alleged rape of a young woman, Duluth police locked up a number of men who worked for a travelling circus. That evening, thousands of Duluthians gathered outside the city jail. The police were under orders not to shoot, and they obeyed.

News Tribune, 1920
With timbers and rails as battering rams, the mob broke down the doors of the jail and staged a trial of six of the men. They convicted Elias Clayton, Elmer Jackson, and Isaac McGhie, who had been held as a witness. The crowd dragged the young men about a block, beat them as viciously as you may imagine, and hanged them from a light pole that stood diagonally across the street from where you are now. Some brave people spoke out in protest, but they were few against thousands. One man took a photograph that was later distributed as postcards. This memorial is dedicated to the memories of the murdered here and everywhere.

The graves are marked  -- An effort began to find the unmarked graves of the victims of the lynchings. Craig Grau, Sociology professor at UMD led this investigation. Park Hill cemetery had interred the bodies in unmarked graves in 1920. First Lutheran Church helped finance the marking of the graves on October 26, 1991. Vigils began to be held at the intersection where the lynching occurred in the 1990’s. In June, 2000, Heidi Bakk-Hansen published an article about the lynching in The Ripsaw, a weekly newspaper in Duluth. The Vigil held that year generated talk about getting a plaque at the site of the lynching to commemorate the 3 young men. A meeting was scheduled and over 30 people attended.

North Star - Duluth Lynchings: Presence of the Past

Email ThisBlogThis!Share to TwitterShare to FacebookShare to Pinterest
Labels: lynching