From the Smithsonian Photography Initiative, "Photography changes the way we record and respond to social issues," by Frank H. Goodyear, III, assistant curator of photographs at the National Portrait Gallery, suggests how mass produced and widely distributed images helped the abolitionist movement.

During the Civil War, photography heroicized the leading politicians and military officers, memorialized sites where the war was waged, and—remarkable for the time—revealed how violent and deadly the battles between Union and Confederate forces actually were. It also played an influential role in broadening the national debate about slavery. As this famous photograph suggests, photography was capable of communicating powerful ideas about the so-called “peculiar institution”—ideas that ultimately undermined the prevailing notion that slavery was a benign tradition.

Gordon As He Entered Our Lines


The photograph pictures the runaway slave Gordon exposing his scourged back to the camera of two itinerant photographers, William D. McPherson and his partner, Mr. Oliver. Gordon had received a severe whipping for undisclosed reasons in the fall of 1862. This beating left him with horrible welts on much of the surface of his back. While the plantation owner discharged the overseer who had carried out this vicious attack, for the next two months as Gordon recuperated in bed, he decided to escape.


In March 1863 he fled his home, heading east towards the Mississippi River. Upon learning of his flight, his master recruited several neighbors and together they chased after him with a pack of bloodhounds. Gordon had anticipated that he would be pursued and carried with him onions from the plantation, which he rubbed on his body to throw the dogs off-scent. Such resourcefulness worked, and Gordon—his clothes torn and his body covered with mud and dirt—reached the safety of Union soldiers stationed at Baton Rouge ten days later. He had traveled approximately eighty miles. 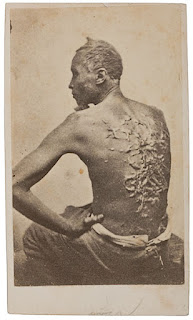 
While at this encampment Gordon decided to enlist in the Union Army. As President Lincoln had granted African Americans the opportunity to serve in segregated units only months earlier, Gordon was at the front of a movement that would ultimately involve nearly 200,000 African Americans. It was during his medical examination prior to being mustered into the army that military doctors discovered the extensive scars on his back. McPherson and Oliver were then in the camp, and Gordon was asked to pose for a picture that would reveal the harsh treatment he had recently received. 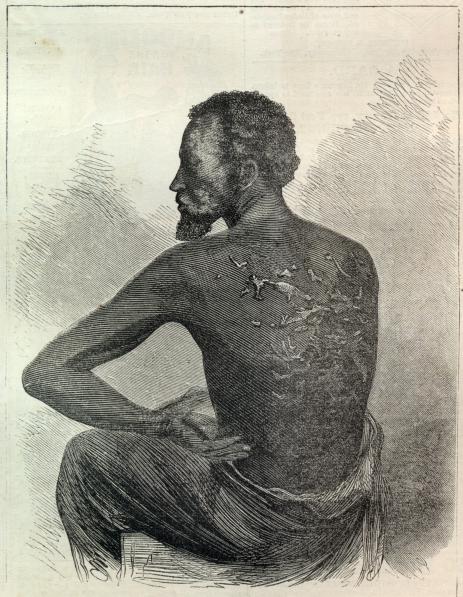 The photographic team mass-produced and sold copies of Gordon’s portrait in the small and popular format of the time, known as the carte-de-visite. The image provoked an immediate response as copies circulated quickly and widely. Samuel K. Towle, a surgeon with the 30th Regiment of the Massachusetts Volunteers working in Baton Rouge, sent a copy of the photograph to the Surgeon-General of the State of Massachusetts. In his accompanying letter he wrote: “Few sensation writers ever depicted worse punishments than this man must have received, though nothing in his appearance indicates any unusual viciousness—but on the contrary, he seems INTELLIGENT AND WELL-BEHAVED.” Within months commercial photographers in Philadelphia, New York, Boston, and London were issuing this image on their own studio mounts. This particular copy was made by the famous New York portrait photographer Mathew Brady. 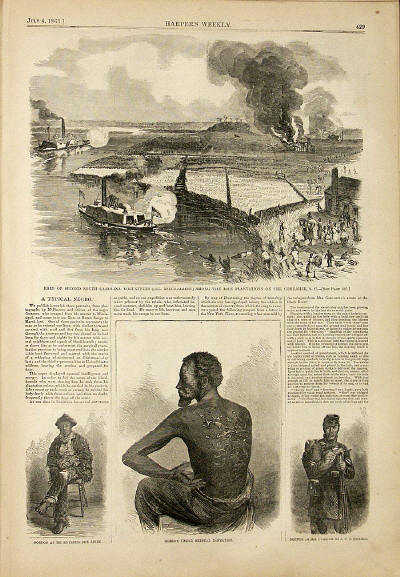 Recognized as a searing indictment of slavery, Gordon’s portrait was presented as the latest evidence in the abolitionist campaign. An unidentified writer for the New York Independent wrote: “This Card Photograph should be multiplied by 100,000, and scattered over the States. It tells the story in a way that even Mrs. [Harriet Beecher] Stowe [author of the 1852 book, Uncle Tom’s Cabin] can not approach, because it tells the story to the eye.” Abolitionist leaders such as William Lloyd Garrison referred to it repeatedly in their work.

On July 4, 1863 Harper’s Weekly reproduced the image as a wood engraving with the article, “A Typical Negro.” Two other portraits of Gordon—one “as he entered our lines,” and the other “in his uniform as a U.S. soldier”—were also included. Together these three images and the accompanying article about his harrowing journey and the brutality of Southern slaveholders transformed Gordon into a symbol of the courage and patriotism of African Americans. His example also inspired many free blacks in the North to enlist. 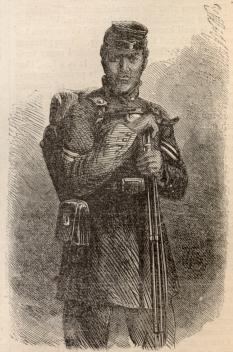 Gordon in his uniform as a U.S. Soldier.

Records of Gordon’s military service during the Civil War are incomplete. Harper’s Weekly reported that he served as a Union guide in Louisiana, and that during one expedition he was taken captive by Confederate forces, beaten, and left for dead. Yet, he supposedly survived and returned to Union lines. The Liberator reported that he served as a sergeant in an African American regiment that fought bravely at the siege of Port Hudson, an important Confederate stronghold on the Mississippi River twenty miles north of Baton Rouge. This battle on May 27, 1863 marked the first time that African American soldiers played a leading role in an assault on a major Confederate position. Their heroism was widely noted and helped convince many skeptics to accept the enlistment of African Americans into the U.S. Army. There are no further records indicating what became of Gordon. Yet, this famous image of him lives on as a searing testament of slavery’s brutality and the fortitude displayed by so many African Americans during this period. (source: Smithsonian Photography Initiative)
Posted by Ron at 7:55 PM