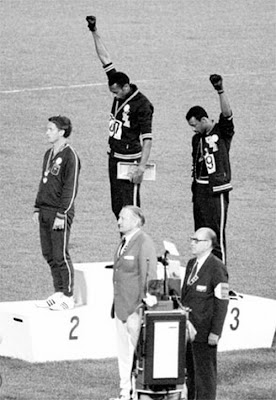 Tommie Smith and John Carlos, gold and bronze medalists in the 200m, stood with their heads bowed and a black-gloved hand raised as the American National Anthem played during the victory ceremony.

The pair both wore black socks and no shoes and Smith wore a black scarf around his neck. They were demonstrating against continuing racial discrimination of black people in the United States.

As they left the podium at the end of the ceremony they were booed by many in the crowd. 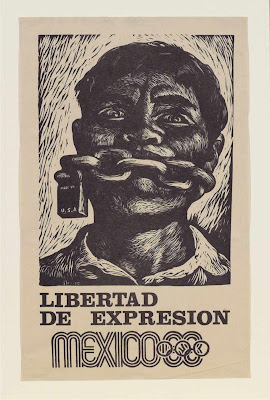 At a press conference after the event Tommie Smith, who holds seven world records, said: "If I win I am an American, not a black American. But if I did something bad then they would say 'a Negro'. We are black and we are proud of being black.

"Black America will understand what we did tonight."

He said the black scarf represented black pride and the black socks with no shoes stood for black poverty in racist America.

Within a couple of hours the actions of the two Americans were being condemned by the International Olympic Committee.

A spokesperson for the organization said it was "a deliberate and violent breach of the fundamental principles of the Olympic spirit."

It is widely expected the two will be expelled from the Olympic village and sent back to the US.

In September last year Tommie Smith, a student at San Jose State university in California, told reporters that black members of the American Olympic team were considering a total boycott of the 1968 games. 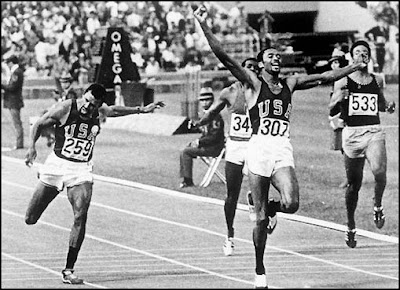 He said: "It is very discouraging to be in a team with white athletes. On the track you are Tommie Smith, the fastest man in the world, but once you are in the dressing rooms you are nothing more than a dirty Negro."

The boycott had been the idea of professor of sociology at San Jose State university, and friend of Tommie Smith, Harry Edwards.

Professor Edwards set up the Olympic Project for Human Rights (OPHR) and appealed to all black American athletes to boycott the games to demonstrate to the world that the civil rights movement in the US had not gone far enough.

He told black Americans they should refuse "to be utilized as 'performing animals' in the games."

Although the boycott never materialized the OPHR gained much support from black athletes around the world. 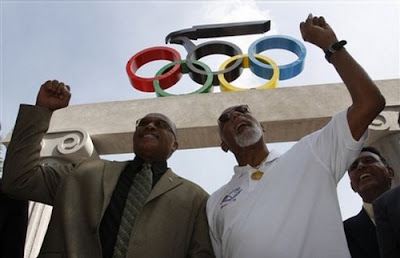 That evening, the silver medalist in the 200m event, Peter Norman of Australia, who was white, wore an OPHR badge in support of Smith and Carlos' protest.

But two days later the two athletes were suspended from their national team, expelled from the Olympic village and sent home to America.

Many felt they had violated the Olympic spirit by drawing politics into the games.

On their return both men were welcomed as heroes by the African-American community but others regarded them as trouble-makers. Both received death threats.

Thirty years after their protest, the two men, who went on to become high school athletics coaches, were honored for their part in furthering the civil rights movement in America.