The 1858 Harper's Weekly article reads: We need no longer, it seems, travel to China or Japan for illustrations of torture. A visit to our own penitentiaries and prisons will furnish all the horrors that the curious appetite can desire.
A year ago we published an account of the poor-houses of this State. Our account was derived from the Report of a Legislative Committee. It showed, in brief, that, as a general rule, paupers and other inmates of the State benevolent institutions were not adequately protected against the cold; that the sexes herded together promiscuously at night; and that, in many instance, poor wretched idiots, half-starved and ill-clad, had actually frozen to death in their cells in State institutions.
We now present a far more fearful picture of the mismanagement of our public institutions for the confinement and correction of criminals. On 21 inst. a convict named More, imprisoned in the State Prison at Auburn, was showered to death by the prison officials. The circumstances of the case are simply as follows: 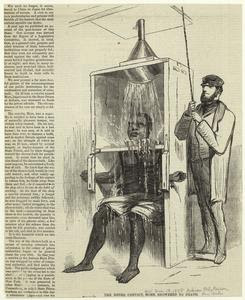 1858 Harper's Weekly
The convict, More, was a negro. He is certified to have been a man of naturally pleasant temper, but violent when crossed. On 1st inst. he was said to have been in a bad humor; he was seen, or is said to have been seen, to sharpen a knife, and mutter threats against someone; on the strength of which he was, on 24 inst., seized by several keepers or deputy-keepers of the State Prison, and by them dragged toward the shower-bath for punishment. It seems he stood in dire dread of the the shower-baths. Like most negros, he entertained a lively fear of cold. He knew that the water of the shower bath would be very cold indeed; and after vainly appealing to the feelings of his captors to release him, he broke away from and and fled -- be it remarked -- to the shop where he was in the habit of working. At the door of the shop a convict arrested him; a keeper and his assistants swiftly followed; he was dragged by main force, and after many violent struggles, to the shower-bath; all the water that was in the tank -- amounting to from three to five barrels, the quantity is uncertain -- was showered upon him in spite of his piteous cries; a few minutes after his release from the bath he fell prostrate, was carried to his cell, and died in five minutes."
It is this homicide that we this week illustrate.
The use of the shower-bath as a means of coercing criminals into submission to the orders of prison authorities began to be general about the year 1845. In that year a convict at the Auburn State Prison was whipped by order of competent authority, and died under the lash. The public indignation which was aroused by the even led to the abolishment of whipping as a punishment in the prisons of State of New York. It was preserved in other States. [Illegible] instance, in Connecticut, in [illegible] State Prison wardens are authorized to this to administer [illegible]..
Posted by Ron at 4:21 PM