Franklin and Armfield Dealer in Slaves 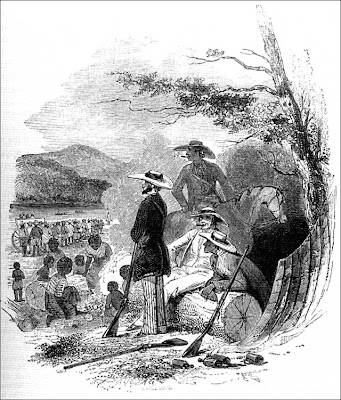 John Armfield and employees guarding a coffle of enslaved men and women being marched southwest. From George W. Featherstonhaugh, Excursion through the Slave States, 2 vols. (London, 1844).
Virginia Census shows the holdings of the Armfield and Franklin slave pen. Their inventory of consisted of predominantly of children and teenagers who would be taken from Virginia and surrounding States and sold to work the Cotton Plantations. 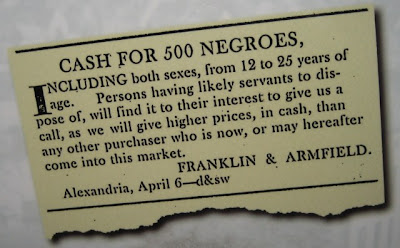 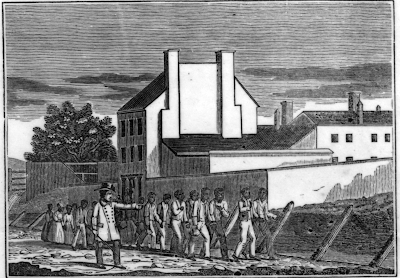 Franklin and Armfield business dealings depended largely on the agents representing the enterprise, who were scattered throughout slave-holding areas of Maryland and Virginia. In Richmond there was R.C. Ballard & Co.; in Warrenton, Virginia, J.M. Saunders & Co.; in Baltimore, Rockville and Fredericktown, Maryland, George Kephart; in Frederick, Maryland, James Franklin Purvis, nephew of Isaac Franklin; and in Easton, Maryland, Thomas M. Jones (Sweig 1980;8). 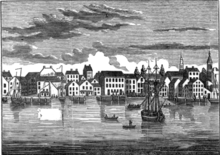 Slave ship taking on slaves at the Alexandria, Virginia, USA waterfront in 1836.
There eventually were three ships traveling between New Orleans and Alexandria for Franklin and Armfield—the Tribune, the Uncas, and the Isaac Franklin. (The Alexandria Slave Pen: The Archaeology of Urban Captivity, by Janice G. Artemel, Elizabeth A. Crowell and Jeff Parker, October 1987. Engineering-Science, Inc. Washington, DC)
(source: Chronology of the History of Slavery and Racism 1830-End) 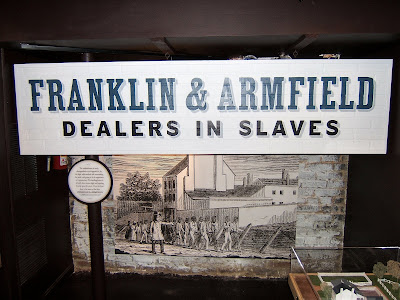 Franklin and Armfield Office was started in 1828 by Isaac Franklin and John Armfield. The office was known to have been the largest slave trading firm in the antebellum south. At its height in the 1830s, the firm transported between 1,000 and 1,200 slaves from Alexandria to New Orleans each year. 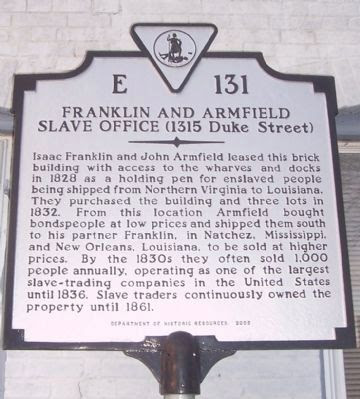 Franklin and Armfield Slave Office Marker (Alexandria, Virginia)
Inscription. Isaac Franklin and John Armfield leased this brick building with access to the wharves and docks in 1828 as a holding pen for enslaved people being shipped from Northern Virginia to Louisiana. They purchased the building and three lots in 1832. From this location Armfield bought bondspeople at low prices and shipped them south to his partner Franklin in Natchez Mississippi and New Orleans, Louisiana, to be sold at higher prices. By the 1830s, they often sold 1,000 people annually, operating as one of the largest slave-trading companies in the United States until 1836. Slave traders continuously owned the property until 1861. 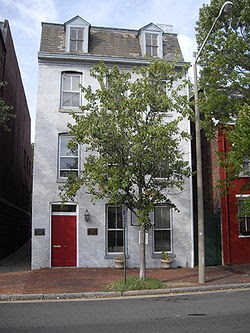 Franklin and Armfield Slave Office/Freedom House Museum
It then closed in 1836 and was sold several times to other slave traders like George Kephart, Price, Birch, and Company, and Solomon Stover. The property was used by the Union to imprison Confederate soldiers and was then a hospital from 1878-1885. The office can be found at 1315 Duke Street in Alexandria, Virginia.
Posted by Ron at 5:25 AM