Murals of slavery coming down from Atlanta office 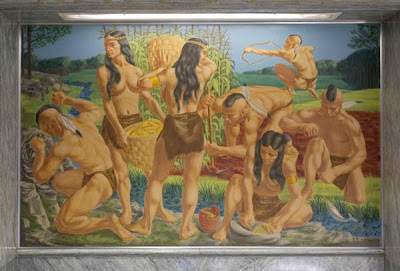 According to the Associated Press article from Monday, 03 January 2011, by Ray Henry: The 4-by-7-foot mural in the Department of Agriculture lobby "... of slaves harvesting sugar cane on a Georgia plantation and picking and ginning cotton are coming off the walls of a state building on the order of a new agriculture commissioner."

The murals are part of a collection of eight works painted by George Beattie in 1956 depicting an idealized version of Georgia farming, 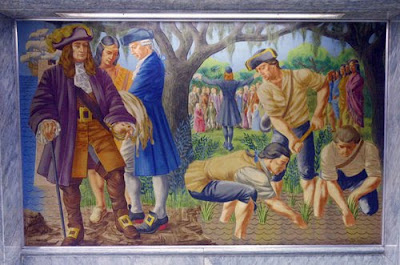 from the corn grown by prehistoric American Indians to a 20th-century veterinary lab. In the Deep South, the history in between includes the forced use of slave labor.

“I don't like those pictures,” said Republican Gary Black, the newly elected agriculture commissioner. “There are a lot of other people who don't like them.” 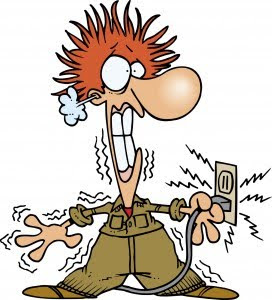 Slavery was indisputably part of 19th-century farming in Georgia. By 1840, more than 280,000 slaves were living in the state, many as field hands. Just before the Civil War, slaves made up about 40 percent of the state's population. 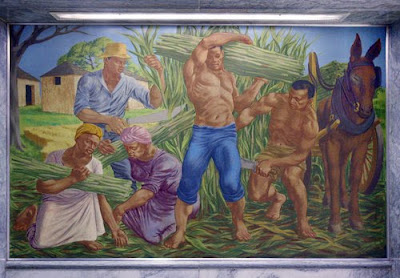 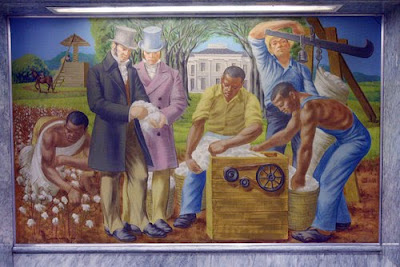 They're framed on either side by black slaves doing the backbreaking work of cotton farming.On the left, a slave hunches over to pick cotton bolls by hand. Two other slaves are using a Whitney gin to separate cotton fiber from seeds as a white overseer weighs cotton bags behind them.

“I think we can depict a better picture of agriculture,” Black said.

There are no signs of the whippings, beatings, shackles or brutality used to subjugate the slaves, who appear healthy, muscular, even robust.
Black said less controversial murals, a scene at a state farmers market, for example, may find a new home in a conference room or elsewhere in the building.Few have openly protested the murals, maybe because the agriculture department is not heavily visited. Black's election marks a generational shift. He will succeed Democrat Tommy Irvin, who was appointed to the post by a segregationist governor in 1969 and won re-election ever since.

Black's plans after the inauguration next month include painting rooms, cleaning offices, patching walls – and taking down those murals.A full century after the Civil War, Southerners still argue over how to handle potent symbols of slavery and segregation in public places. It's nothing new. 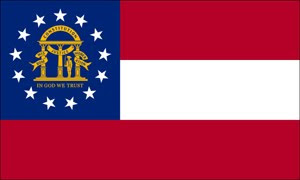 Only in 2001 did Gov. Roy Barnes replace it, and some say it cost him the election the following year.
Those conflicts spill into art. In 2007, a black lawmaker lashed out at white colleagues for refusing to support putting a portrait of Coretta Scott King in the Statehouse beside that of her husband, slain civil rights leader Martin Luther King Jr. The sponsor suggested her white colleagues were bigoted. The opposing lawmakers argued that portraits in the capitol should be reserved for Georgia legislators.
In 1995, shortly before he died, Beattie defended his murals in a department-sponsored article that mentioned the art had spurred debate and concern among visitors and employees. 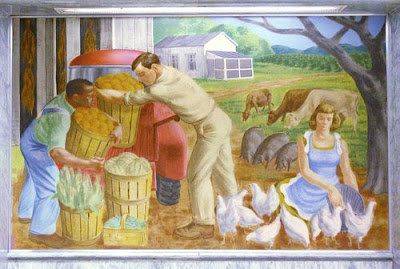 “As a human being, I am vehemently opposed to slavery, as anyone should be,” Beattie said, “but it was a significant epoch in our history; it would have been inaccurate not to include this period.”
"His paintings showing slavery could be interpreted as an indictment. They hang in a lower lobby opposite a painting of colonial founder James Oglethorpe, a utopian who dreamed of making Georgia a classless society free of slavery."
***
Perhaps, Mr. Beattie shouldn't have painted such a happy darkie narrative of slavery. In all of Mr. Beattie's murals, the enslaved labor is wearing shoes, well heeled or "likely negroes" are picking the cotton, and their clothes are well fitted and mended. As we've seen in photographs, most slaves were barefooted and dressed in rags. Furthermore, most of the picking was done by child slaves, women or older people. The strong men, loaded the bales of cotton, dug ditches, felled trees, built the railroads and roadways.
The shocking narrative isn't that there was slavery, that was well established in Georgia during the 18th Century. No, of course enslaved men, women and children were the sin qua non of Georgia agriculture and the planter plutocracy wealth. There are plenty of accounts of Georgia's slave auctions, illegal slave trading in Savannah, the convict lease system was notoriously racially abusive.
Posted by Ron at 8:43 AM