African Americans and the War of 1812

From the USA National Park Service Series: Fighting for Freedom: African Americans and the War of 1812, "Chapter 6: Wedged Between Slavery and Freedom: African American Equality Deferred," by Gene Allen Smith of Texas Christian University -- The documentary record that chronicles black service during the War of 1812 is very fragmentary at best. Peter Denison, Prince Witten, Charles Ball, Ned Simmons, and Jordan Noble all chose sides during the War of 1812, and these choices ultimately defined their individual and collective identities.

In the end, the War of 1812 did not provide greater opportunities or equality for free blacks as they anticipated, nor did it initiate a wave of emancipation for enslaved Americans seeking freedom. 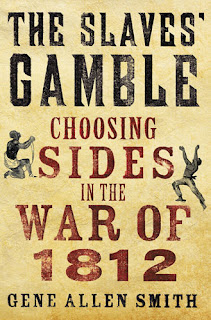 As their stories testify, men of African descent did serve as soldiers and sailors aboard warships and on privateers during the war in substantial numbers on either side; nearly 1,000 African American sailors were captured and held in Britain’s notorious Dartmoor prison—and they embraced their status as free black seamen struggling to uphold their belief in “Free Trade and Sailors Rights.” Some 600 Chesapeake Bay slaves joined the British Colonial Marines and marched with redcoats on Washington, DC, and Baltimore, while others chose to remain with their masters and fight for the Americans. The American army had not opened its enlistments to black troops, and most states did not permit blacks to muster. There were no all-black regular army units in 1812 and 1813, and the black presence, when noted, was poorly documented. Along the coast of Georgia and South Carolina, enslaved peoples faced the same choices as did those in the Chesapeake, while along the Gulf Coast they found additional choices—some joined with the Spanish, with Native American tribes, and others with Andrew Jackson or the British. Jackson ultimately secured the assistance of most with promises of freedom and equality that never fully appeared.

In some instances, the feats of men like Denison were recorded for posterity, but the stories of noncombatants are chronicled often only in statistics. In the Chesapeake, as many as 4,000 to 5,000 enslaved people fled to British protection and were evacuated to Bermuda, Canada, or Trinidad. In New York, Philadelphia, and Baltimore, enslaved people and free blacks worked alongside whites to dig entrenchments for those cities, loudly proclaiming their civic and patriotic duty. Yet, black-white relations worsened after the war. Collectively, black unity had demonstrated a powerful threat, engendering fears in white America that were exacerbated by memories of the recent revolution in nearby Haiti (1791–1804). In the aftermath of the conflict, Americans destroyed free mulatto gulf communities in former Spanish Florida that they viewed as a threat to peace and as a challenge to the white status quo. Later, the removal of American Indians east of the Mississippi River bolstered the southern plantation system, creating the Cotton Kingdom of the mid-1800s and further altering race relations. Meanwhile, in British dominions, former American enslaved people clutched tenaciously to the freedom they obtained with evacuation, though the British government abandoned them in a segregated naval base in Bermuda or herded them into ill-provisioned camps in Canada and then into unsettled regions of Trinidad; they struggled economically, but they remained free.

In the end, the War of 1812 did not provide greater opportunities or equality for free blacks as they anticipated, nor did it initiate a wave of emancipation for enslaved Americans seeking freedom. They would find themselves wedged between slavery and freedom, and between race discrimination and egalitarianism. Their patriotic efforts had not reshaped white minds about what role they should play in society, and public memories of the war largely ignored their contributions. New prejudicial racial distinctions replaced class differences among blacks and destroyed once and for all the optimism of the Revolutionary era. For African Americans, the “forgotten war” delayed their quest for equality and freedom. (source: National Park Service)


Fighting for Freedom: African Americans and the War of 1812 from Virginia Historical Society on Vimeo.
Posted by Ron at 6:33 AM