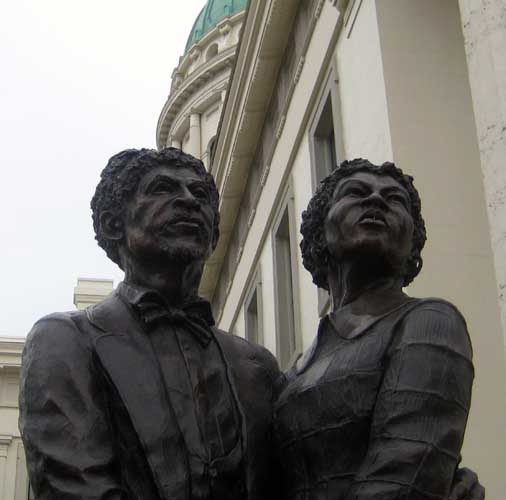 From the Washington Post, "Invisible Woman," by Martha A. Sandweiss, on 5 April 2009 -- In 1857, the Supreme Court ruled in Scott v. Sandford that African Americans -- whether free or enslaved -- could not be citizens of the United States. The plaintiff, Dred Scott, an enslaved resident of St. Louis, had sued for his freedom 11 years earlier on the grounds that he once lived in a territory where Congress had prohibited slavery. The Supreme Court not only denied Scott any and all rights within the American legal system, it also declared that Congress could not prohibit slavery in an American territory. In negating the limits on the expansion of slavery established by the Northwest Ordinance and the Missouri Compromise, the infamous Supreme Court ruling exacerbated the tensions between North and South that led, a few years later, to civil war.

Previous historians have examined the life of Dred Scott for clues that might explain the timing of his lawsuit and his stubborn perseverance in the courts. A Virginia-born slave, he was sold to an Army doctor who took him to the free state of Illinois and to Wisconsin Territory; eventually master and slave returned to St. Louis. Along the way, Scott likely gained some medical expertise and a taste of relative independence. He may also have had the temperament and resilience for a tough legal fight. But in "Mrs. Dred Scott," University of Iowa law professor Lea VanderVelde argues that the real impetus for the legal case came from Dred's wife, Harriet, a woman heretofore all but unknown. Originally a co-plaintiff with her husband, Harriet watched her case become subordinated to his as the lawsuit moved through the appellate process. But, VanderVelde insists, she probably instigated the court battle. 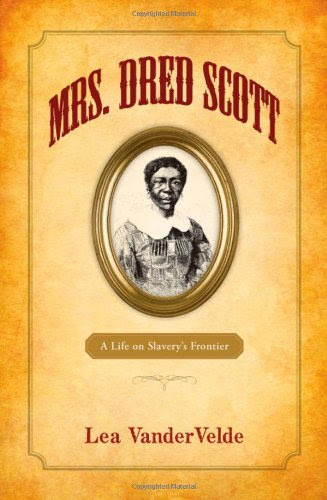 In a remarkable act of historical recovery, VanderVelde resurrects the life of Harriet Scott. As a woman, a slave, an illiterate person and a resident of a frontier community, Harriet left few traces in the historical records. But drawing largely on the diary of Lawrence Taliaferro, the Indian agent and slave owner who brought the teenaged Harriet with him from Pennsylvania to Fort Snelling in Wisconsin (later Minnesota) Territory in 1835, VanderVelde recreates the world in which Harriet lived before her marriage to Dred in 1837.

And what a remarkable world it was. In the remote outpost where her master engaged in diplomatic negotiations with Indian tribes, Harriet likely encountered the painter George Catlin, the French geographer Joseph Nicollet and the future president Zachary Taylor, and she probably observed the Ojibwa treaty negotiations of 1837. Drawing inferences from the experiences of others, VanderVelde paints a compelling picture of Harriet's everyday life -- where she slept, what she ate, how she stayed warm through frigid winters. 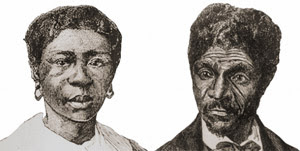 When she turns to Harriet and Dred's later married life in St. Louis, VanderVelde again relies largely on the experiences of others -- particularly of other enslaved people who came to public attention through freedom suits of their own -- to infer the shape of the Scotts' daily life. The detail is rich and suggestive, but keeping Harriet Scott at the center of the story proves challenging. The reader often loses sight of Scott amid all the events that transpired around her. And for all we learn about the circumstances of Harriet's life, her inner thoughts remain unknown. VanderVelde tries to argue that Harriet acquired her passion for justice from watching her master be fair to Indian tribes. But it remains difficult to understand how a young woman might learn about justice from the man who owned her.

Harriet Scott's practical concerns seem more compelling than her philosophical beliefs. The Scotts created an acceptable life for themselves in St. Louis in the early 1840s. "Having a nominal master who left one alone," VanderVelde notes, "may have, in certain circumstances, been more secure than being free and subject to the random persecutions to which free blacks were sometimes exposed." But when Dred's mistress declined his offer to purchase his freedom, Harriet came to understand that the family's value as property lay not in her aging husband but in herself and her two daughters, the eldest of whom was now old enough to be hired out or sold away. The evidence presented here suggests that her decision to press for legal freedom stemmed not from some abstract desire for justice but from a very immediate desire to protect her family. 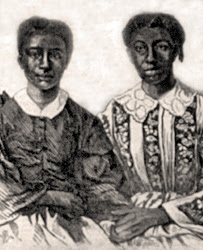 After the Scotts lost their appeal to the Supreme Court in 1857, a benefactor purchased their freedom. Dred died a free man in 1858. Harriet lived until 1876, supporting herself as a washerwoman. She had little interest in talking about her life or explaining what motivated her to go to court. But rescued here from the dustbin of history, she becomes the face of an infamous trial and a reminder of how immediate personal concerns can compel one to take extraordinary risks.  (source: The Washington Post)