MERRY CHRISTMAS! From the US Slave Blog

Merry Christmas From The US Slave Blog!


According to CBS News, "Special African-American Santa Holds Court At Macy’s: People Come From All Across The 5 Boroughs To Wait In Line, Request Him," on 23 December 2013 --  NEW YORK (CBSNewYork) — Crowds in the know have been drawn to Macy’s to see the “special Santa,” an African-American Santa Claus tucked away in Santaland at the Macy’s flagship store in Herald Square.

As CBS 2’s Tracee Carrasco reported, the special Santa only appears by request. But he was the sole reason Elizabeth Kittles and her family made the trip from the Bronx Monday night.

“I could have gone anywhere,” Kittles said, “but I came right here to Macy’s because I knew they had an African-American Santa.”

When they reach the front of the line, parents must ask to see the special Santa. But Kittles said he is like a secret Santa to many.

“There was plenty of African-American families that didn’t know, and when I did tell them, one guy said, ‘They have a black Santa?’ (I said), ‘Yeah they do,’” Kittles said.

Kittles, who has been bringing her sons to see the special Santa at Macy’s for 10 years now, wishes the store would make sure more families know.

“An elf just told me as I was going through Santaland,” Kittles said. “It’s great that they have that option, but it would be great if they put it out there either on the visitors’ website or when they advertise when Santaland is open.” 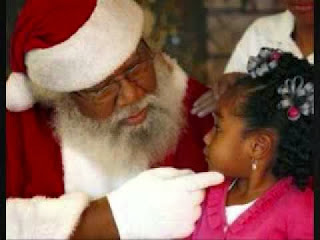 Other parents who spoke to CBS 2 did not know about the special Santa either, but agreed with Kittles.
“I think it would mean a lot to some people; would make a difference for some people,” said Danielle Moriello of Linden, N.J. “It doesn’t matter what color he is.”

“It wouldn’t confuse the kids at all,” added Rafael Mendoza of Washington Heights. “It’s just the way you raise them up.”

CBS 2 reached out to Macy’s for a comment about their special Santa. They responded, “Santa is all things to all who believe.” (source: CBS News)