From the November 2012 issue of the Richmond Magazine, "First Market: Shopping at 17th Street," by Harry Kollatz, Jr., on 30 November 2012, [This piece appeared as a Flashback in November 1997 and again in Kollatz’s book “True Richmond Stories”]  --  The Virginia General Assembly established the “publick market” in 1779 as part of the state capital’s transfer from Williamsburg to Richmond. The legislative act also selected sites for the Capitol, Halls of Justice and the governor’s residence. At the time, 17th Street was known as First Street.

In 1792, “an open shed supported on wooden posts” occupied a site at First Street, east of what was Shockoe Creek, recalled Samuel Mordecai in his 1859 book Richmond In By-Gone Days. The slope down to Shockoe Creek “was a green pasture and considered a common, much used by laundresses whereon to dry their clothes which they washed in the stream.” This common on the south side of Main Street held a spring that later served the tavern built there.

Main Street was a country road wending between Williamsburg and Richmond, placing the market at an important intersection. Shockoe Creek was navigable by small oyster boats, and the market was the natural pivot of commerce.

Near present-day 17th and Franklin streets was the cage, an octagonal structure—the city’s first lockup—with attendant whipping post. The market was enlarged in 1812 and 1828, and other activities were centered there beside the jostling of market carts and the hucksters’ cries of melons, greens, herbs or fish. A famous market shopper was Chief Justice John Marshall. He was a casual dresser at a time when fastidiousness was the rule. Once at the market, a man who’d bought a turkey mistook Marshall for an errand runner and offered him a coin if he would carry the turkey up the hill for him. Marshall, then head of the U.S. Supreme Court, accepted. Versions conflict as to whether he took the gratuity or, with characteristic humor, declined.

Around the market prior to the Civil War, slave auctions and sales were conducted. Lumpkin’s Jail at 15th and Franklin streets was constructed to hold slaves before they were sold off. In 1867, Dr. Nathaniel Colver, a feisty grandfather, met Mary Ann Lumpkin, a former slave whose deceased husband, Robert Lumpkin, had earned his wealth from the slave trade. She rented the former jail to Colver, and there he founded what evolved into Virginia Union University.

A market building was completed in 1854. During the bulk of 58 years, it bustled as a vital component of the city’s commerce and government. Meats were sold on the first floor. The second floor included a police station, courtroom, community meeting room and a bell that rang the time to Main Street passersby. The market building was used for religious revivals, and during elections candidates encouraged votes with barrels of whiskey.

The market’s important civic function placed it in a eatured role during the 1870 civic unrest caused by the refusal of the Reconstruction-era mayor to leave office. The grand old market was demolished in 1912 for a far less interesting structure. 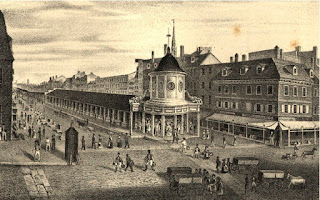 Meat was the market’s principle product, although plenty else was available. A fish stand was located in another market building along 17th and Grace streets. Carts were parked along East Franklin and 18th, bearing fresh produce that was often simply strewn along the cobbles for inspection. In 1927, flooding from Shockoe Creek was tamed by the market’s concrete and brick walls. Merchants’ complaints of ceiling paint chips fluttering like snow onto their displays resulted in $10,000 worth of repairs in 1943.

Saturday was the big family marketing day. The larder could be replenished with cracklings for corn bread, chitterlings, fatback, sausage or pepper-coated Smithfield hams. The array of fruits included Virginia apples. 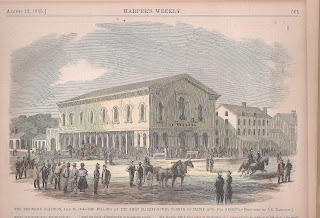 The city government maintained a market commission, but the market was in time placed under the jurisdiction of the city’s parks and recreation department. This move caused a certain sense of abandonment by the growers and sellers. Throughout the next 30 years, the market’s viability was assaulted by large indoor grocery stores and the decline of small farmers. The market building was razed in 1961 to accommodate parking and traffic snarls. A series of sheds and stands replaced the old building and it seemed the market was finished.

Various plans sought to relocate it to the Main Street Station or the state fairgrounds. The Shockoe Bottom renaissance of the 1980s brought new life to the market. Some shoppers, weary of fluorescent lighting, chemicals and sameness, got hungry not just for fresh eggplant but also for an authentic experience and good product at a reasonable price. A round of renovations soon followed. 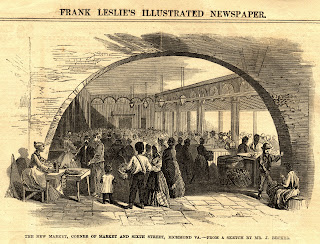 In 1995, Farmers’ Market Commission was formed by the city to implement the next phase of the market’s history. Chris Scott, owner of None Such Place and Homer’s Real Sports Grill in Shockoe Bottom, was its chairman.

“Basically, we were asked by the city if we wanted to run it or should it just be let go,” said Scott, a native Richmonder. “But it’s too valuable to allow that.” A New York–based consulting firm recommended a $160,000 budget and expected the market could turn a $17,000 profit in three years. City Council provided an initial budget of $127,000 to hire a manager and make physical improvements.

“Our objective is to be self-sufficient in five years; we hope in three,” Scott said in 1997. In other cities, markets have brought up surrounding neighborhoods, while in Shockoe, the time has come to have the historical market diversify the district’s offerings.

Plans in 1997 called for not only daily produce offerings but also a nighttime arts and crafts market and a Sunday antiques fair. “We’re not talking about a flea market but a well-organized group selling quality items,” Scott said.  (source:  Richmond Magazine)
Posted by Ron at 7:18 AM