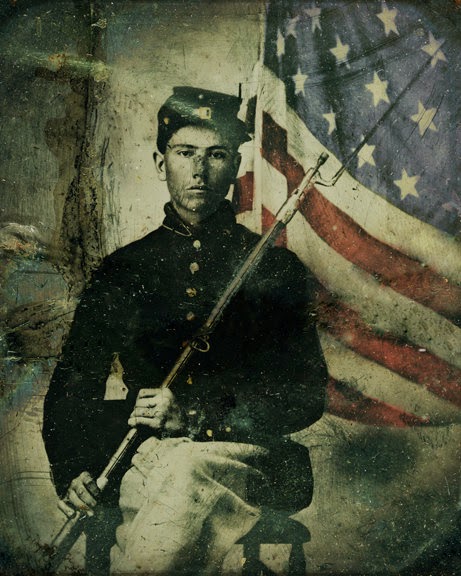 From The New York Times, "Union Proud," by Gary W. Gallagher, on 23 April 2011 --  It seemed like all of New York turned out for the April 20, rally in support of the Union. The event, which appropriately took place at Union Square, prompted diarist George Templeton Strong to suggest that “[f]ew assemblages have excelled it in numbers and unanimity.” Men, women and children carried flags or wore cockades, the Stars and Stripes hung from buildings and impromptu renderings of “The Star-Spangled Banner” echoed through the streets. “The city,” observed Strong, “seems to have gone suddenly wild and crazy.”

Unionism was, in the wake of Fort Sumter, a national obsession. What Walt Whitman later said of Lincoln and Union in the wake of the president’s assassination applied equally to most loyal Americans in those first days of war. “UNIONISM, in its truest and amplest sense, form’d the hard-pan of his character,” wrote the poet, who defined it as “a new virtue, unknown to other lands, and hardly yet really known here, but the foundation and tie of all, as the future will grandly develop.”

In a conflict that stretched across four years and claimed more than 800,000 federal casualties, the nation experienced huge swings of civilian and military morale before crushing the Confederacy. Through it all, Union remained the paramount goal, a fact clearly expressed by Abraham Lincoln in speeches and other statements designed to garner the widest popular support for the war effort. But what, exactly, did Whitman, Lincoln and others mean by Union in the first place?

For Whitman and millions like him, Union meant “the nation,” but in a way completely unlike the nationalism that often defined public sentiment elsewhere. To them it represented the cherished legacy of the founding generation, a democratic republic with a constitution that guaranteed political liberty and afforded individuals a chance to better themselves economically. From the perspective of loyal Americans, their republic stood as the only hope for democracy in a western world that had fallen more deeply into the stifling embrace of oligarchy since the failed European revolutions of the 1840s. Slaveholding aristocrats who established the Confederacy, believed untold unionists, posed a direct threat not only to the long-term success of the American republic but also to the broader future of democracy.

Should armies of citizen-soldiers fail to restore the Union, forces of privilege on both sides of the Atlantic could pronounce ordinary people incapable of self-government and render irrelevant the military sacrifices and political genius of the revolutionary fathers. Secretary of State William Henry Seward encapsulated much of this thinking in defining the Republican Party’s wartime agenda: “Their great work is the preservation of the Union and in that, the saving of popular government for the world.”

Nevertheless, as we approach the sesquicentennial of the Civil War, the meaning of Union to mid-19th-century Americans has been almost completely lost. Americans today find it hard to believe that anyone would risk life or fortune for something as abstract as Union. A war to end slavery seems more compelling, the sort of war envisioned in the film “Glory.” There’s a corrective value to this view: slavery, emancipation and the actions of black people, unfairly marginalized for decades in writings about the conflict, have inspired a huge and rewarding literature since the mid-1960s. No longer can any serious reader fail to appreciate how African Americans figured in the political, social and military history of the war. Unfortunately, a concentration on emancipation and race sometimes suggests that Union victory had scant meaning apart from them.

Historical context is crucial on this point. Anyone remotely familiar with American democracy as practiced in 1860 knows that it denied women, free and enslaved African Americans, and other groups the basic liberties and freedoms that most northerners routinely attributed to their republic. Almost 99 percent of residents in the free states were white in 1860, and their racial views often offend our modern sensibilities. Yet a portrait of the nation that is dominated by racism, exclusion and oppression obscures more than it reveals.

Within the mid-19th century western world, the United States offered the broadest political franchise and the most economic opportunity. Vast numbers of immigrants believed that however difficult the circumstances they might find, immigration to the United States promised a brighter future. As one Irish-born Union soldier wrote, “this is my country as much as the man that was born on the soil.” If the Union lost the war, he added, “then the hopes of millions fall” and European aristocrats could claim “that such is the common end of all republics.”

Nor was Union merely the instigating motivation, ready to give way once the war entered its later years. During the last months of fighting, Lincoln and William Tecumseh Sherman spoke to the continued centrality of Union. The president’s fourth annual message to Congress, dated Dec. 6, 1864, mentioned the proposed 13th Amendment to abolish slavery, which had passed the Senate eight months earlier but failed to garner the requisite two-thirds’ majority in the House of Representatives. The issue should be revisited, Lincoln argued, in light of Republican success in the recent national elections. Those returns represented “the voice of the people now, for the first time, heard upon the question.” Lincoln framed his call for another vote in the House with reference to what he knew to be the bedrock of sentiment among loyal Americans. “In a great national crisis, like ours, unanimity of action among those seeking a common end is very desirable — almost indispensable,” he observed: “In this case the common end is the maintenance of the Union,” and the amendment stood “among the means to secure that end.”

Five-and-one-half months later, in the wake of United States victory, Sherman echoed Lincoln’s words in a congratulatory order to veterans he had led in Georgia and the Carolinas. “Three armies had come together from distant fields, with separate histories,” he said, “yet bound by one common cause — the union of our country, and the perpetuation of the Government of our inheritance.”

True, Republicans and many Democrats eventually accepted emancipation as a useful tool to help defeat the rebels and punish the slaveholding class most that Northerners blamed for secession and the outbreak of war. Most also came to believe that only a Union without slavery would be safe from internal threats in the future. But, except among abolitionists and some Radical Republicans, liberation of enslaved people always took a back seat.

Again, this fact should not drain all value from a war for constitutional law and a democratic republic on the northern model. Rather, for the wartime generation, Union promised liberty, freedom and opportunity that, while restricted in many ways even with emancipation, would expand as the republic moved through the 19th century and into the 20th. That expansion often moved at a depressingly slow pace — even stopped altogether at various points — but likely would have been far more problematical if the Confederacy had succeeded, slavery had survived in some of the loyal states and the specter of additional groups of states separating themselves from a diminished Union had lingered on the political landscape.

Without an appreciation of why loyal citizens believed a Union that guaranteed democratic self-government was worth great sacrifice, no accurate understanding of the Civil War era is possible. A sesquicentennial that fails to make this clear will have failed in a fundamental way.  (source: The New York Times)