Forever Free: The Story of Emancipation and Reconstruction 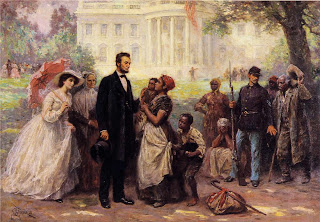 As reviewed in the New York Times Sunday Book Review, "Forever Free: The Story of Emancipation and Reconstruction, By Eric Foner," reviewed by James Goodman, on 29 January 2006 --ERIC FONER wrote "Forever Free" to combat what he calls our "sheer ignorance" of the 15 years between the Emancipation Proclamation and the withdrawal of the last federal troops from the South in 1877. Yet when it comes to those years, ignorance is progress, a step in the right direction.

What could be worse than ignorance?

Horrible history: the distortions, misinformation and myths that passed for "the facts of Reconstruction" for nearly a century after 1877. In that history, Lincoln's magnanimous plan for reunion died with him, as power-hungry, South-hating Radical Republicans in Congress rolled over Andrew Johnson and set out to punish the South for the war.

What followed was a "tragic era" of military occupation, corrupt state governments, heavy taxation, wasteful spending and, worst of all, "Negro rule": the enfranchising of ignorant, gullible, bestial black men. All seemed lost, until the Ku Klux Klan arose and expelled the carpetbaggers, dragged the scalawags back to the white side of the color line and put the former slaves in their place. Home rule was restored, the South redeemed.

That's not a caricature. That was Reconstruction at our finest universities (nowhere more than at Columbia, where Foner now holds an endowed chair) and it was Reconstruction in popular novels, histories and films, most notably D. W. Griffith's repugnant classic, "The Birth of a Nation." Woodrow Wilson, a political scientist and Princeton professor before he became president, viewed the film in the White House. It is "like writing history with lightning," he said, "and my only regret is that it is all so terribly true."

It was terrible, but not true - as African-Americans knew. "One fact and one alone explains the attitude of most recent writers toward Reconstruction," W. E. B. Du Bois wrote in a blistering critique in 1935: "they cannot conceive Negroes as men." Du Bois saw Reconstruction as a noble effort to establish genuine democracy in the South. His white contemporaries ignored him, but a generation later his sources and insights contributed mightily to a new history, a history that has been elaborated and refined but remains the standard one today.

"Forever Free" will not supersede "Reconstruction: America's Unfinished Revolution, 1863-1877," the grand synthesis Foner published in 1988. His new book is aimed at readers basically unfamiliar with American history. For their benefit, he opens with a short account of slavery and emancipation. He then turns to the struggle to determine the meaning of freedom and the character of American democracy after the war. "The vast economic and political power of the South's white elite hung in the balance," he writes. So did the "lives and dreams" of four million former slaves.

Landowners and merchants wanted laborers to plant and pick their cotton - on terms as close to those of slavery as they could get. Freedmen and women wanted land of their own. They also wanted schools, churches, equality before the law and the franchise. They didn't get land. But by the early 1870's, they had achieved a measure of economic autonomy, and the legal and political tools - especially the Civil Rights Acts and the 14th and 15th Amendments - necessary to protect it. Black men voted, served on juries and held local, state and national office. "For a brief moment, the country experimented with genuine interracial democracy," Foner writes. But it wasn't easy or pretty, and it provoked a ferocious reaction. In the face of fraud and terror, the freedmen's white allies, north and south, abandoned them. 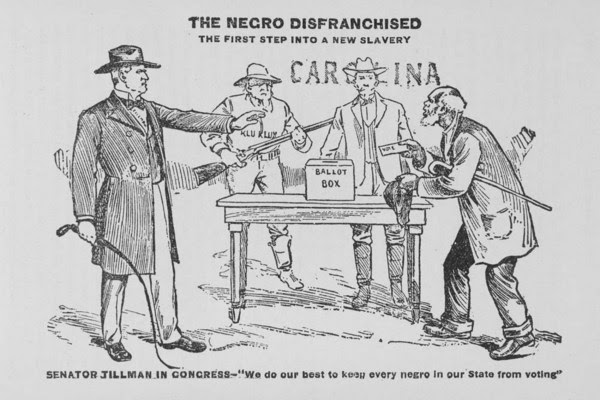 In his last two chapters, with the uninitiated again in mind, Foner traces the lines of race and politics that run from Reconstruction to the age of segregation to the civil rights movement to our own time. And throughout, the history lesson is enhanced by Foner's collaboration with Joshua Brown, a social historian and cartoonist. Brown selected the book's "illustrations" (scores of drawings, engravings, paintings, photographs and cartoons), and he wrote six short "visual essays." Those essays, set among Foner's chapters, vividly show how images - a Republican buying one black man's vote, Klansmen lynching another - are never merely illustrations of historical experience. They are another dimension of that experience.

"Forever Free" is a good book: passionate, lucid, concise without being light. But will it be a match for ignorance? The old history took hold when Northerners concluded that the freedmen and women were as hopeless as white Southerners said they were; their fate was best left in white Southern hands. Through decades of lynching, segregation, disfranchisement, debt peonage, heightened prejudice and abject poverty, history justified inaction by demonstrating that federal interference only made race matters worse. 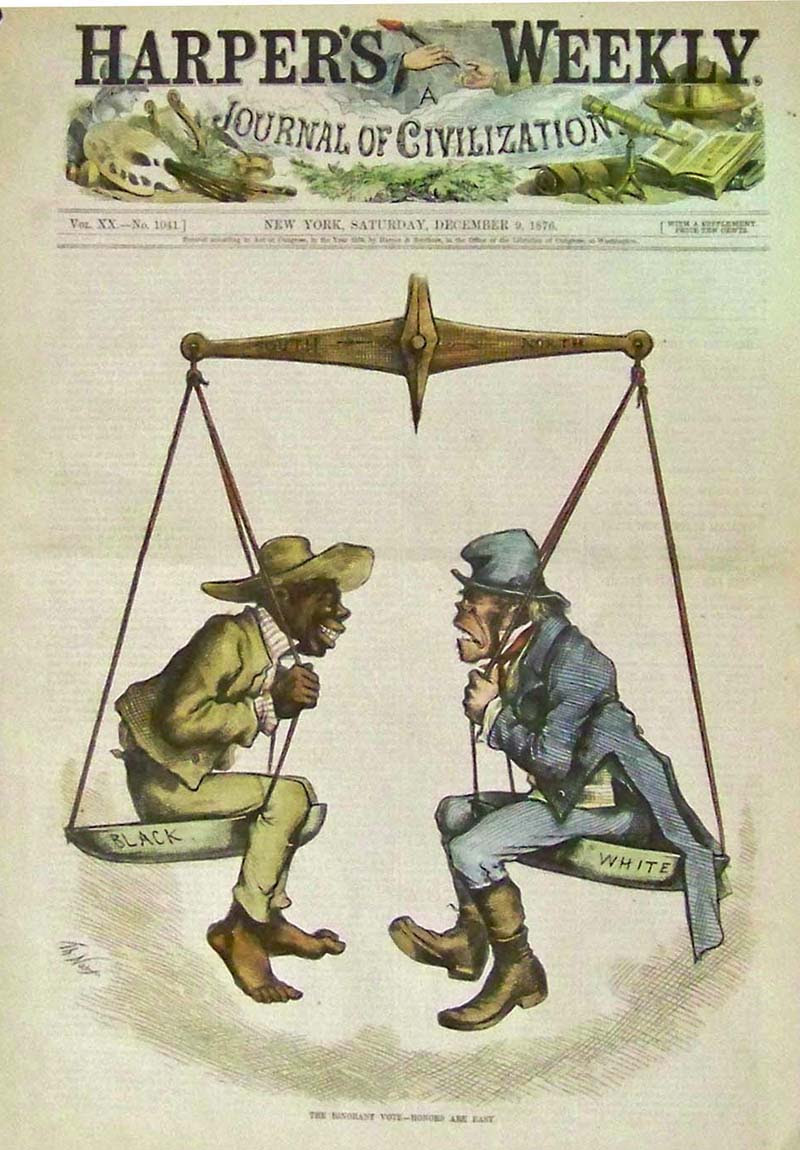 The new history took hold in the 1960's, during the civil rights movement and Lyndon Johnson's "Great Society," when many Americans came to believe that the government had an obligation to join the struggle for equality, and that they had a huge stake in the outcome of that struggle.

Four decades and untold political abuse later, our federal government is again held in low esteem. Many wonder if it is even competent to do what it used to do best: wage war. I would like to think that the prejudice at the heart of the old history of Reconstruction would prevent its revival. But as long as Americans continue to see government simply as a problem, we won't know much, or care, about Reconstruction.  [source: The New York Times -- James Goodman, a professor of history at Rutgers University, Newark, is the author of "Stories of Scottsboro" and "Blackout."]