From the NY Daily News, "West African teen Kelvin Doe awes scientists with his knack for building tech from scrap: Doe, the Sierra Leone teen also known as DJ Focus, built a radio station from discarded parts and constructed a battery to help manage blackouts in his village – and now plans to build a windmill to produce electricity," by Michael Walsh, on 5 December 2012  -- A West African science prodigy inspired scientists from top tier U.S. universities by transforming trash into technological solutions to empower his community – and he is only 16. 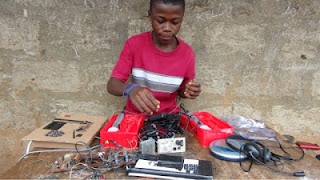 
“He literally goes into trash cans, finds broken electronic parts from the garbage and makes stuff on his own,” said David Sengeh, the PhD student at MIT who organized Doe’s trip to the U.S. for his university’s "Visiting Practitioner's Program.”

Doe – the program’s youngest participant ever – was invited on the strength of a local FM radio station he created to address important local issues, reported ABC News. 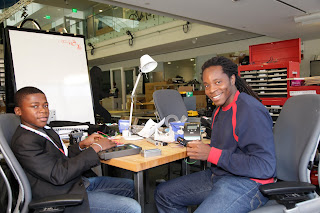 “If we have a radio station in my community, the people can be able to debate about issues affecting our community and Sierra Leone as a whole,” Doe explained.

Sengeh, also from Sierra Leone, is dedicated to fostering innovation among young people.

“Sierra Leone and many other African countries receive aid,” Sengeh said in a video for YouTube channel THNKR. “But it does not necessarily get us anywhere. We are not looking into the future. We are not designing our own future.”

Still a teen, Doe has been inventing electrical solutions for his community.

“The lights will come on once in a week, and the rest of the month, dark,” Doe said. “So, I made my own battery to power lights in people’s houses.”

Doe also plans to design a windmill to generate more electricity, he explained.

Clever and resourceful, Doe created a transistor radio, homemade batteries and studio generator with broken equipment he found in the trash.

During his time in the U.S., Doe had access to MIT’s resources and mentors. He even met with Harvard’s president.

“For Kelvin, his biggest challenge is going to be the scarcity of the materials and the information once he goes back,” Sengeh said.

Undeterred, Doe intends to share his knowledge and continue inventing for his community, according to THNKR.

“Whatever things I’ve learned here, I will share it with my friends, colleagues and loved ones,” Doe said.

The fundraiser Innovate Salone, which is run by a nonprofit Sengeh co founded, aims to raise $100,000 by the end of the year to sponsor Doe and other young innovators.