Dividing a Nation: The Origins of the Secession Crisis and the Civil War

From the Washington Post, "Five myths about why the South seceded," by James W. Loewen, on 26 February 2011  --  One hundred fifty years after the Civil War began, we’re still fighting it — or at least fighting over its history. I’ve polled thousands of high school history teachers and spoken about the war to audiences across the country, and there is little agreement even about why the South seceded. Was it over slavery? States’ rights? Tariffs and taxes?

As the nation begins to commemorate the anniversaries of the war’s various battles — from Fort Sumter to Appomattox — let’s first dispense with some of the more prevalent myths about why it all began. 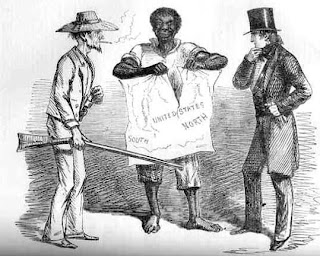 1. The South seceded over states’ rights.


Confederate states did claim the right to secede, but no state claimed to be seceding for that right. In fact, Confederates opposed states’ rights — that is, the right of Northern states not to support slavery.

On Dec. 24, 1860, delegates at South Carolina’s secession convention adopted a “Declaration of the Immediate Causes Which Induce and Justify the Secession of South Carolina from the Federal Union.” It noted “an increasing hostility on the part of the non-slaveholding States to the institution of slavery” and protested that Northern states had failed to “fulfill their constitutional obligations” by interfering with the return of fugitive slaves to bondage. Slavery, not states’ rights, birthed the Civil War.

South Carolina was further upset that New York no longer allowed “slavery transit.” In the past, if Charleston gentry wanted to spend August in the Hamptons, they could bring their cook along. No longer — and South Carolina’s delegates were outraged. In addition, they objected that New England states let black men vote and tolerated abolitionist societies. According to South Carolina, states should not have the right to let their citizens assemble and speak freely when what they said threatened slavery.

Other seceding states echoed South Carolina. “Our position is thoroughly identified with the institution of slavery — the greatest material interest of the world,” proclaimed Mississippi in its own secession declaration, passed Jan. 9, 1861. “Its labor supplies the product which constitutes by far the largest and most important portions of the commerce of the earth. . . . A blow at slavery is a blow at commerce and civilization.”

The South’s opposition to states’ rights is not surprising. Until the Civil War, Southern presidents and lawmakers had dominated the federal government. The people in power in Washington always oppose states’ rights. Doing so preserves their own.

2. Secession was about tariffs and taxes.


During the nadir of post-civil-war race relations — the terrible years after 1890 when town after town across the North became all-white “sundown towns” and state after state across the South prevented African Americans from voting — “anything but slavery” explanations of the Civil War gained traction. To this day Confederate sympathizers successfully float this false claim, along with their preferred name for the conflict: the War Between the States. At the infamous Secession Ball in South Carolina, hosted in December by the Sons of Confederate Veterans, “the main reasons for secession were portrayed as high tariffs and Northern states using Southern tax money to build their own infrastructure,” The Washington Post reported.

These explanations are flatly wrong. High tariffs had prompted the Nullification Controversy in 1831-33, when, after South Carolina demanded the right to nullify federal laws or secede in protest, President Andrew Jackson threatened force. No state joined the movement, and South Carolina backed down. Tariffs were not an issue in 1860, and Southern states said nothing about them. Why would they? Southerners had written the tariff of 1857, under which the nation was functioning. Its rates were lower than at any point since 1816.

3. Most white Southerners didn’t own slaves, so they wouldn’t secede for slavery.


Indeed, most white Southern families had no slaves. Less than half of white Mississippi households owned one or more slaves, for example, and that proportion was smaller still in whiter states such as Virginia and Tennessee. It is also true that, in areas with few slaves, most white Southerners did not support secession. West Virginia seceded from Virginia to stay with the Union, and Confederate troops had to occupy parts of eastern Tennessee and northern Alabama to hold them in line.

However, two ideological factors caused most Southern whites, including those who were not slave-owners, to defend slavery. First, Americans are wondrous optimists, looking to the upper class and expecting to join it someday. In 1860, many subsistence farmers aspired to become large slave-owners. So poor white Southerners supported slavery then, just as many low-income people support the extension of George W. Bush’s tax cuts for the wealthy now.

Second and more important, belief in white supremacy provided a rationale for slavery. As the French political theorist Montesquieu observed wryly in 1748: “It is impossible for us to suppose these creatures [enslaved Africans] to be men; because allowing them to be men, a suspicion would follow that we ourselves are not Christians.” Given this belief, most white Southerners — and many Northerners, too — could not envision life in black-majority states such as South Carolina and Mississippi unless blacks were in chains. Georgia Supreme Court Justice Henry Benning, trying to persuade the Virginia Legislature to leave the Union, predicted race war if slavery was not protected. “The consequence will be that our men will be all exterminated or expelled to wander as vagabonds over a hostile earth, and as for our women, their fate will be too horrible to contemplate even in fancy.” Thus, secession would maintain not only slavery but the prevailing ideology of white supremacy as well.


Since the Civil War did end slavery, many Americans think abolition was the Union’s goal. But the North initially went to war to hold the nation together. Abolition came later.

However, Lincoln’s own anti-slavery sentiment was widely known at the time. In the same letter, he went on: “I have here stated my purpose according to my view of official duty; and I intend no modification of my oft-expressed personal wish that all men every where could be free.” A month later, Lincoln combined official duty and private wish in his preliminary Emancipation Proclamation.

White Northerners’ fear of freed slaves moving north then caused Republicans to lose the Midwest in the congressional elections of November 1862.


Gradually, as Union soldiers found help from black civilians in the South and black recruits impressed white units with their bravery, many soldiers — and those they wrote home to — became abolitionists. By 1864, when Maryland voted to end slavery, soldiers’ and sailors’ votes made the difference.

5. The South couldn’t have made it long as a slave society.


Slavery was hardly on its last legs in 1860. That year, the South produced almost 75 percent of all U.S. exports. Slaves were worth more than all the manufacturing companies and railroads in the nation. No elite class in history has ever given up such an immense interest voluntarily. Moreover, Confederates eyed territorial expansion into Mexico and Cuba. Short of war, who would have stopped them — or forced them to abandon slavery?

To claim that slavery would have ended of its own accord by the mid-20th century is impossible to disprove but difficult to accept. In 1860, slavery was growing more entrenched in the South. Unpaid labor makes for big profits, and the Southern elite was growing ever richer. Freeing slaves was becoming more and more difficult for their owners, as was the position of free blacks in the United States, North as well as South. For the foreseeable future, slavery looked secure. Perhaps a civil war was required to end it.

As we commemorate the sesquicentennial of that war, let us take pride this time — as we did not during the centennial — that secession on slavery’s behalf failed.  [source: Washington Post, Sociologist James W. Loewen is the author of “Lies My Teacher Told Me” and co-editor, with Edward Sebesta, of “The Confederate and Neo-Confederate Reader.”]


Dividing a Nation: The Origins of the Secession Crisis and the Civil War