Jólakötturinn The Yule Cat of Iceland 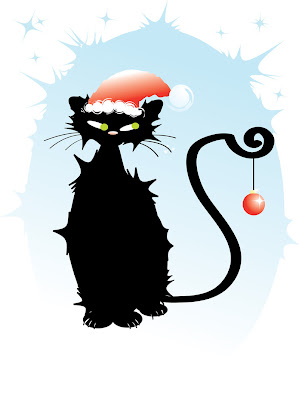 From The Grapevine -- "Grapevine reporter depicts the legend of the Christmas Cat," on 10 December 2008, by Haukur S. Magnússon   --  “We’ve got this database of monsters and creatures in our past. These stories are fascinating, it’s a shame that they’re not used more in modern culture,” remarked comic artist Hugleikur Dagsson in an interview this summer. The Grapevine promptly drafted Dagsson to illustrate a series of articles on these monsters of yore. For this ninth instalment in the series Dagsson depicts one of Iceland’s creepiest critters and the reason we sport cool new threads during the holidays; Jólakötturinn, the Christmas Cat.

Jólakötturinn is a lovable, wholly unholy beast, a sort of proto-fashion police whose impeccable sense of style, in your face attitude and lack of respect for human life terrified Icelanders into stylistic submission in ways that today’s anorexia-inducing Vogues and Cosmopolitans can only dream of.

The ginormous cat’s sole purpose in life is to eat children (and adults, some say) that do not get a new piece of clothing before Christmas. Yes, it devours financially disadvantaged children.This is the kind of message Icelanders like to send out in their folklore: if you do not have the money or means of acquiring new items of clothing before the festival of lights, you will be eaten by a gigantic cat. This is one of the reasons that Icelanders clock in more hours of overtime at their jobs than most European nations: to avoid the cat, we stayed up sewing or knitting in the olden days, and we stayed up graphic designing or stock-brokering in early 2008.

Some versions of the Jólakötturinn story actually claim he did no such thing as eat kids, opting rather to steal all their food and holiday treats instead. While its a far cry better than chewing them to a bloody pulp and devouring their tasty flesh, its still real mean of him. Not much is known about Jólakötturinn’s origins, in fact a famous poem about him ny Iceland’s beloved bard Jóhannes úr Kötlum accurately proclaimed that “no one knows where he’s from or where he goes”. 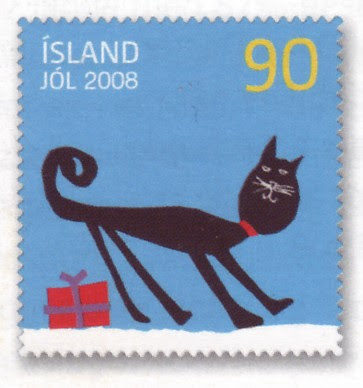 Although he is believed to have terrified Icelanders since the dark ages, written records detailing the murderous feline and its children-eating ways only go back to the nineteenth century. He is thought to be the house-cat of the evil troll Grýla (she also liked the taste of children – more on her in next issue), her troll husband Leppalúði and the non-trollish thirteen mischief-making Yule-lads in a cave somewhere up in the mountains. As far as we know, Jólakötturinn and his evil, biting teeth are still at large. Merry Christmas, everybody!  (source: The Grapevine) You all know the Yule Cat
And that Cat was huge indeed.
People didn’t know where he came from
Or where he went.

He opened his glaring eyes wide,
The two of them glowing bright.
It took a really brave man
To look straight into them.

His whiskers, sharp as bristles,
His back arched up high.
And the claws of his hairy paws
Were a terrible sight.

He gave a wave of his strong tail,
He jumped and he clawed and he hissed.
Sometimes up in the valley,
Sometimes down by the shore.

He roamed at large, hungry and evil
In the freezing Yule snow.
In every home
People shuddered at his name.

If one heard a pitiful “meow”
Something evil would happen soon.
Everybody knew he hunted men
But didn’t care for mice.

He picked on the very poor
That no new garments got
For Yule – who toiled
And lived in dire need.

From them he took in one fell swoop
Their whole Yule dinner
Always eating it himself
If he possibly could.

Hence it was that the women
At their spinning wheels sat
Spinning a colorful thread
For a frock or a little sock.

Because you mustn’t let the Cat
Get hold of the little children.
They had to get something new to wear
From the grownups each year.

And when the lights came on, on Yule Eve
And the Cat peered in,
The little children stood rosy and proud
All dressed up in their new clothes.

For all who got something new to wear
Stayed out of that pussy-cat’s grasp
He then gave an awful hiss
But went on his way.

Whether he still exists I do not know.
But his visit would be in vain
If next time everybody
Got something new to wear.

Now you might be thinking of helping
Where help is needed most.
Perhaps you’ll find some children
That have nothing at all.