From the UK Guardian, "Gangnam Style passes 1bn views on YouTube: South Korean rapper Psy's song has broken a Guinness world record and is the most liked video in the history of YouTube," by Charles Arthur, on 21 December 2012 -- It's spawned a new dance style, parodies, copies and a fascination with things Korean – and on Friday afternoon Gangnam Style, the video by the South Korean singer Psy became the first ever to break a billion views on YouTube.

The song – an ironic comment on the rich socialites living in the Gangnam area in central Seoul, the south Korean capital – also had its title added to the Collins Dictionary as one of the phrases of the year (along with omnishambles and fiscal cliff).

The K-pop (Korean pop) song and particularly its video – with its "horseriding" dance – has made 34-year-old Psy an international star who has since performed with Madonna, broken a Guinness World record for the most liked video in YouTube history, and inspired flashmobs: one is scheduled for new year's eve at the Brandenburg Gate in Berlin where hundreds of thousands could turn up. 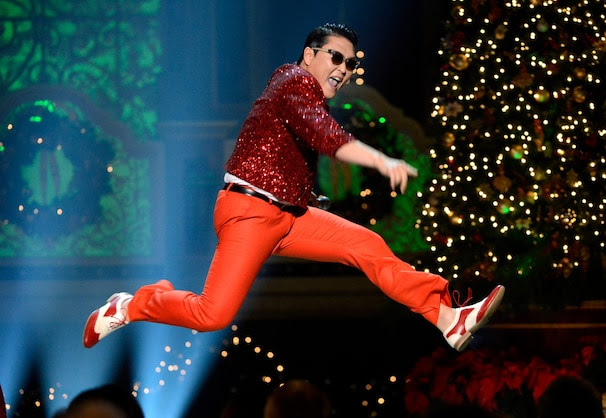 Described by Reuters as "chubby", the South Korean singer had released five studio albums, but had never had a hit in the west until Gangnam style was released on 15 July.

Progress was slow until on 28 July, the video was shared on the social site Reddit – and remarked on by Robbie Williams on his personal blog. At that point it took off, and in late November passed Justin Bieber's Baby as the most-watched video of all time. Ranked second, Baby has a mere 813m views.  (source: UK Guardian)