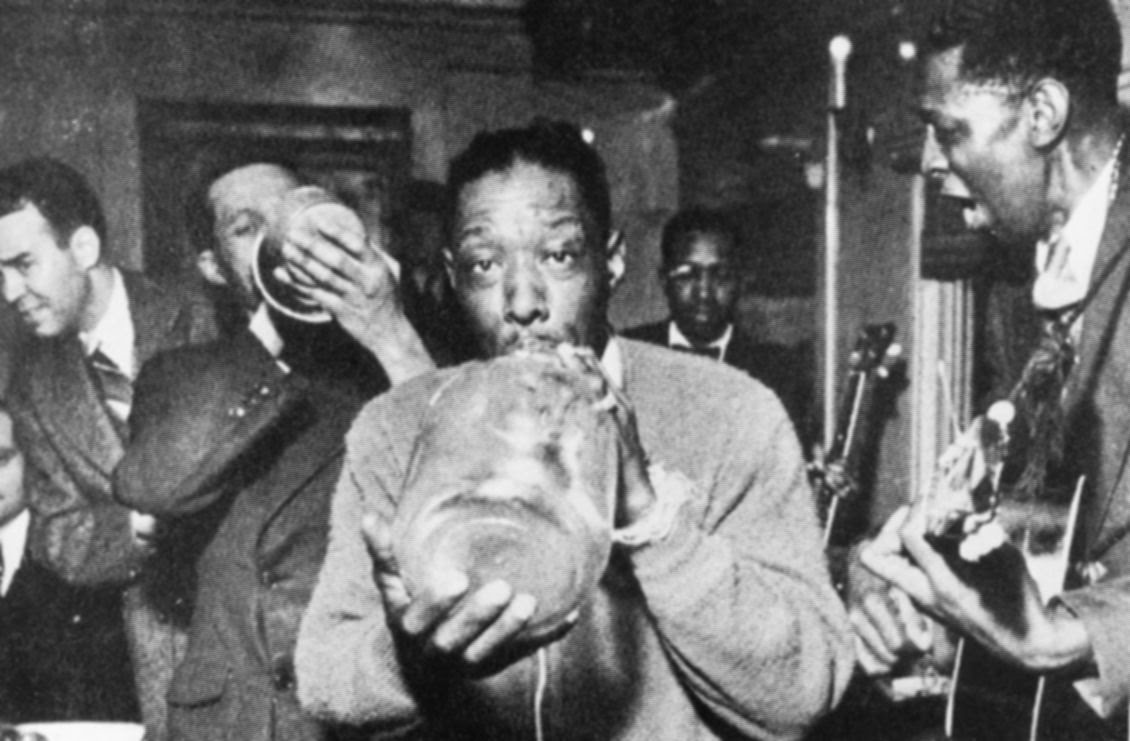 The "Musical Jug," by Kim Ruehl, from About.com -- Definition of Musical Jug: The musical jug is precisely what it says it is: usually a stoneware jug (although glass and ceramic jugs are also played) into which the player blows with their mouth. The musical jug is played in a manner similar to playing brass instruments or didjeridoos. Although, whereas brass instruments or didjeridoos are held directly up to the mouth, the musical jug is held about an inch from the mouth as the player buzzes into it. Pitch is changed by altering the shape of the embouchure and tightening or loosening the lips. (source: About.com)

From the website of the Genuine Jug Band, "History: Jug Inspires Jazz and Blues" -- In the turn of the twentieth century jug band music took on many styles; Jazz, Blues, Country and Western and Hill Billy (bluegrass). The Genuine Jug Band plays jazz and blues.

Books on jazz are seldom written by historians or musicologists, they are commonly written by jazz enthusiasts. To write a popular book on jazz the intelligent first step would be to compile a list of the most popular jazz artists and discuss their work and lives. Sounds good, but to assume, as most books do, that these players just woke up one morning as world class jazz musicians, or that their style and delivery was learned and developed while playing in a famous jazz band isn’t usually the case. 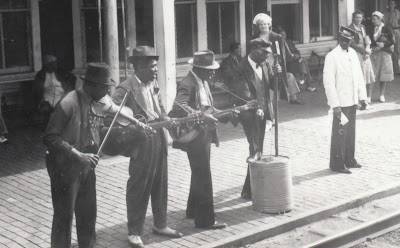 Many of these players got their first opportunity to play in a spasm, juke, jug, washboard or gutbucket band. All of these were often categorized as novelty bands because words like jass, jazz or blues had not been accepted as styles or category labels yet. Some of these early jazz pioneers were the descendants of African slaves and did not necessarily come from affluent middle class families who could afford to purchase a musical instrument.

However, man’s creativity cannot be stifled.

Instruments were home made in some cases, or substitutions were found such as with a jug sounding like a tuba, or using a washboard for a rhythm instrument. Music was made and created and invented, and new styles were developed. These bands receive no mention in the majority of books concerning jazz (or jass, as it was first called). This part of history was dismissed as irrelevant by early authors, never looked back upon, and is all but forgotten. Authors always look at the books that were written prior to their new work and live by the old rule: ”copying one idea is plagiarism but copying lots of ideas is research.” Books on jazz rarely mention jug bands, and if so the bands are immediately dismissed as amateur. Jug bands were playing jazz and blues long before the music was recognized and labelled as such. Jug bands played on all the Ohio and Mississippi riverboat paddle wheelers and many of the southern night clubs. They were in vaudeville, on the streets and in traveling medicine shows. They were using improvised instruments when they couldn’t get their hands on the real thing and they were making music!

Being in these jug bands was not a decision made to increase their wealth although many were quite successful. These bands played because it was crazy fun and a real joy to produce the art that is music. But oh! The Mound City Blue Blowers, the first band to ever record a kazoo, was such a huge hit that everybody wanted to play in that jug band and it went through some players that were to become fairly big names such as; Eddie Condon, Jimmy Dorsey, Gene Krupa, Eddie Lang, Red McKenzie, Jack Teagarden, Frankie Trumbauer, Muggsy Spanier, Glen Miller and Dick Slevin. (source: Genuine Jug Band)