The letters "S.S.," for slave stealer, were branded on the hand of Captain Jonathan W. Walker, an ardent abolitionist, as shown in this dramatic photograph. Walker was born in Harwich on Cape Cod in 1799 and spent his early years between the shipyard and the sea. His life-long interest in the abolition of slavery probably began in 1835 when he went on an expedition to Mexico to assist in the colonization of escaped American Black slaves, and he was also one of the conductors along the underground railroad.1 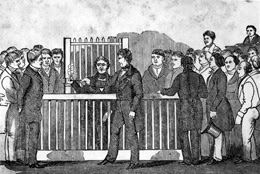 By 1844, Walker moved to Florida where his efforts for the abolitionist cause met with adversity. In that year, he attempted to assist seven escaped slaves to freedom by sailing them from Florida to the West Indies. During the voyage, he became ill. His crew was untrained in sailing and navigational procedures and, as a result, they were "rescued" by a proslavery wrecking sloop and returned to Florida. The slaves were returned to their masters, and Walker was arrested. He was convicted and sentenced in a federal court, spent one year in solitary confinement, and was fined $600. It was at this time that his right palm was branded with the letters "S.S."2

The event did not deter Walker from spreading the abolitionist word. His fine was paid by Northern abolitionists, and between 1845 and 1849 he lectured throughout the country on antislavery subjects.3 He settled in Muskegon County, Michigan, where he died in 1878; a monument to him was unveiled there in the same year.4 John Greenleaf Whittier, the poet and abolitionist, paid tribute to Walker in his poem "The Branded Hand" which first appeared in a book of abolitionist poetry entitled Voices of Freedom in 1846 and included the passage:

Then lift that manly right-hand, bold ploughman of the wave!
Its branded palm shall prophesy, "SALVATION TO THE SLAVE!" 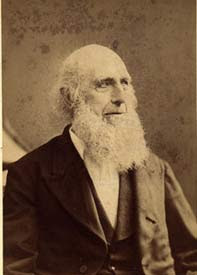 The photograph of Walker's hand was commissioned by Henry Ingersoll Bowditch (1808—1892), a Boston abolitionist, while Walker was in that city, probably in 1845.5 It was taken at the daguerreotype studio of Southworth and Hawes, a prominent partnership famous for its daguerreotypes of renowned individuals, groups, and views of Boston, and it has been called "one of the earliest conceptual portraits in that a body part can stand for the total personality."6 Due to the reverse image consistent with the daguerreotype process, the image appears to be the left hand, but is in fact the right. Josiah Johnson Hawes and Albert Sands Southworth opened their daguerreotype studio in 1843, inspired by an 1840 lecture by Francois Gouraud, Louis Daguerre's American agent. Hawes, born in East Sudbury, Massachusetts, worked as an itinerant portrait painter from 1829, but in 1841 he began to pursue the commercial prospects of this new permanent photographic process. Southworth was born in West Fairlee, Vermont, and, after hearing Gouraud's lecture, opened a daguerreotype studio with an old Phillips Academy classmate, Joseph Pernell, in Cabotville. After this business was ruined by Southworth's experiments, he joined forces with Hawes in 1843. The partnership ended temporarily in 1849 when Southworth left for California in search of gold. His health failed, however, and he returned to Boston in 1851 to resume his partnership with Hawes. Southworth and Hawes received a patent for their invention, the "Grand Parlor Stereoscope," in 1854. The partnership was dissolved in 1861-1862 but not before the partners created some of the most famous daguerreotypes produced in the United States, some of which are now held by the Museum of Fine Arts, Boston; the Metropolitan Museum of Art, New York; and the International Museum of Photography at George Eastman House, Rochester, New York.7 (source: Massachusetts History)