‘Cream of Wheat’ Man Finally Gets A Tombstone

From the Seattle Times on 17 June 2007: LESLIE, Mich. — A man widely believed to be the model for the smiling chef on Cream of Wheat boxes finally has a grave marker bearing his name.

Frank L. White died in 1938, and until last week, his grave in Woodlawn Cemetery bore only a tiny concrete marker with no name.

On Wednesday, a granite gravestone was placed at his burial site. It bears his name and an etching taken from the man depicted on the Cream of Wheat box. 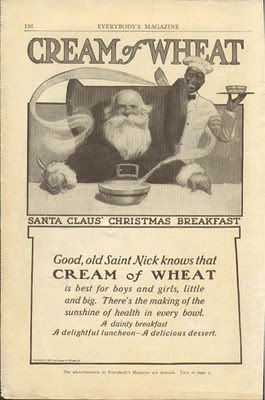 Cream of Wheat Christmas
Jesse Lasorda, a family researcher from Lansing, discovered that White was born about 1867 in Barbados, came to the United States in 1875 and became a citizen in 1890. When White died Feb. 15, 1938, the Leslie Local-Republican newspaper described him as a "famous chef" who "posed for an advertisement of a well-known breakfast food."

Frank L. White, believed to be the model for the smiling chef, died in 1938


White lived in Leslie for about the last 20 years of his life, and the story of his posing for the Cream of Wheat picture was known in the city of 2,000, located between Jackson and Lansing and about 70 miles west of Detroit.

The chef was photographed about 1900 while working in a Chicago restaurant. His name was not recorded. White was a chef, traveled a lot, was about the right age and told neighbors he was the Cream of Wheat model, the Jackson Citizen Patriot said. (source: Seattle Times )
Posted by Ron at 9:52 PM